Batman:Eternal #50, The Mastermind is Revealed

Synopsis: The epic Bat-story over a year in the making comes to a stunning end! Gotham City is in flames! Villains are running wild in the streets! Bat-tech has been corrupted! And the mastermind behind it all has put a knife in Batman’s ribs! How will the Dark Knight put an end to this nightmare…and how will it shape the face of Gotham City to come? 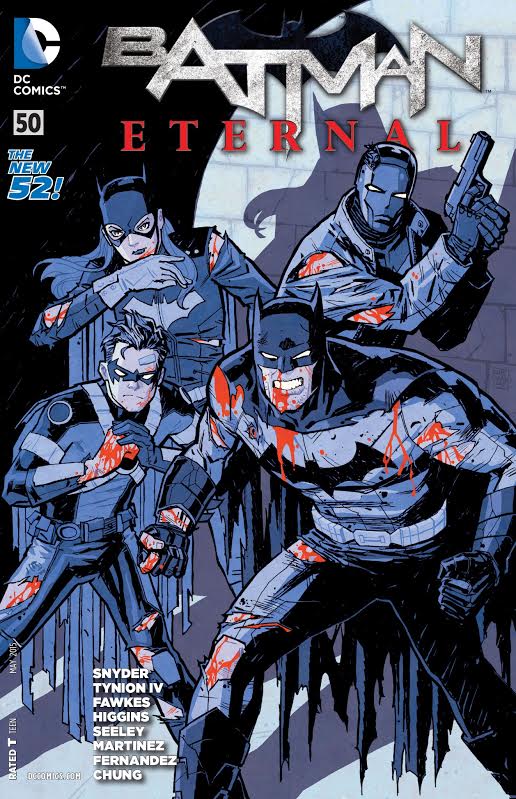 Gotham is on fire in the latest issue of Batman:Eternal, which continues to speed toward its epic conclusion. Issue #50 picks up just mere moments after last week’s issue left off, with Batman having taken care of Bane. It’s perhaps the quickest battle between the two in their 20-year history, and I was hoping to get to see some of the action. This, however, was a clue as to how the rest of the issue was going to be. The Dark Knight sweeps in and takes out his rogues gallery, who have been battling members of the family. Mr. Freeze, Scarecrow, Clayface and the Joker’s daughter (who’s taken down by Batgirl) don’t last long this week, making me wonder how valuable the family really is if Batman can get things done in just a few pages (only kidding, but really think about it).

Meanwhile, the riot inside Blackgate escalates but Gordon will have no part in it. Lucky for him, he’s rescued. That may not be surprising, but Bard being one of his rescuers sure is. Gordon seems hesitant as they escape and head towards Gotham, surely ready to take control of the city the next two issues.

All signs point to the Beacon Tower, as the one behind all of this sends a signal and waits for our hero’s arrival. As he does, there’s plenty of snappy dialogue, the usual build up, and then the reveal. 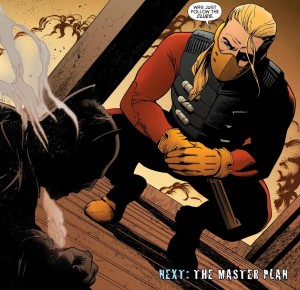 Cluemaster? Interesting. Can’t say that I’m surprised, yet I wouldn’t have guessed. Snyder and company have done a great job using lesser-known foes (Crazy Quilt in Batman #38) so can’t argue with their decision. However, having 50 issues in this story, it’s hard to piece together this “master plan”… which oddly enough is the title of next week’s penultimate issue.

The team of James Tynion, IV and Alvaro Martinez handle the script and art duties for this week’s issue. It’s a fine job by both, as we take off from the opening page and never really slow down until the end. That’s the sign of a great combination of dialogue and pictures, which Eternal has never slacked on in its run. Though we have seen a variety of artists (great artists mind you), the team behind the story (Scott Snyder, Ray Fawkes, Kyle Higgins, Tim seeley, James Tynion, IV) have really constructed something special. This is a huge story, perhaps the biggest in Batman’s history, and it has been a great run. So now the pressure is really on, with only two issues left. How will it end? I haven’t got a clue.