Synopsis: The ultra top-secret Batman arc known only as “Endgame,” continues – it’s a story arc so steeped in mystery, all we can tell you is the title! 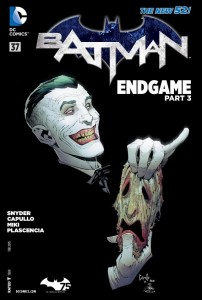 How do you write a good Joker story? That’s a question that popped into my mind in 2012 during Scott Snyder and Greg Capullo’s “Death of the Family” story. The character has been around almost as long as Batman himself, endured hundreds (thousands?) of appearances in comics, TV shows and movies…AND appeared in a number of video games. So, with the many different takes and variety of stories told in 74 years, HOW do you come up with a fresh, exciting and thrilling Joker tale?

I’ve got the answer: Scott Snyder and Greg Capullo. Batman:Endgame is slicing its way toward the top of the list of greatest Joker stories EVER. I don’t know how the team has done it. I am simply loving this story, MAYBE more than “Death of the Family.” Applause for DC for keeping everything about this story under wraps, for the fans are getting to experience this story the way it was intended.

I’m not even going to rehash the plot here. Let’s just say Gotham is a little “happier” these days, and Joker is seeming a little more “immortal.” Those aren’t clues, just the only way I can talk about this issue without giving anything away.

I love the team working on this story. We are three issues in and have three more to go. I don’t have a clue where we are headed either. And that has put a big ol’ smile on my face.