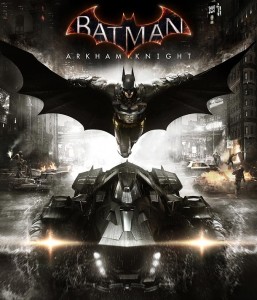 We finally have confirmation for the next installment of the hit Arkham franchise in the form of Batman: Arkham Knight. Developed by Rocksteady Studios (makers of Arkham Asylum and Arkham City), the new game features a new area of Gotham City to explore that is said to be much larger than that encountered in Arkham City. The Batmobile will finally be an integral part of gameplay and wider streets will accommodate this new feature. Returning villains include Scarecrow, Two-Face, Harley Quinn, and Penguin with more to be named in the future.

Expect the new game to be available later this year for Playstation 4, Xbox One, and PC. Unfortunately, Xbox 360, PS3, and WiiU owners have already been left behind. That is unless a ported down version is announced down the road, which I wouldn’t entirely rule out.  Pre-Order bonuses that have already been announced include a playable Harley Quinn and four challenge maps.

UPDATE: Here is all the new info from the actual Game Informer article:

-Last Batman game for Rocksteady, will work on something totally new next.-There will be a brand new villain, something made by Rocksteady that they say will be the ultimate test for Batman-Batmobile can be called at any moment with a button.The city streets are much wider to allow for the Batmobile. You will rocket jump off ramps and do all sorts of cool maneuvers.-You can eject jump out of the Batmobile right into a super fast glide straight through the glass of a building to knock out enemies. They said glass breaking will be a big new thing.-New moves include being able to use all your gadgets during flight. You now have a counter throw where you counter a guy and throw him into another guy. A new quick ground takedown.-A quick backflip where you then throw a Batarang in an enemies face.-For the predator sections you can now chain takedowns of up to four enemies. For instance pop out of a grate and take one guy, jump to the next and so on. You can now enter grates from a distance, he will automatically do a jump or roll to enter them.-Riddler challenges seem to be car based. The first one has you enter a sort of Riddler race track where you have to activate walls and ramps, when you activate one another closes so as you drive you have to be constantly turning on and off these ramps as you navigate the course.Batmobile fires missiles and stun guns. It destroys anything it touches so if you bump into cars the cars go flying. It’s basically unstoppable.-Story is that after Joker’s death all the criminals decided to work together and their plan comes together this night where they plan to kill Batman. The article talks mostly about Scarecrow; he scattered bombs throughout Gotham.-Oracle will play a larger role, you get to visit her base and talk to her, tons of Batman Easter Eggs included.Kevin Conroy is Batman, all the previous voice actors are back.-Gotham City is 5 times bigger than AC. Split into 3 areas. NO LOAD TIMES at all, entering buildings is seamless.They spend a bunch of time talking about how detailed the models are, one character has more polygons than the environment of Asylum.-Batman will start off with the old Batsuit and upgrade at some point in the game.-It says it is running on their modified Unreal engine.– All quickfire gadgets can now be used during flight.
– Combat tweaks (note: Not enough time to go over these in detail. For example, you can throw by tilting left towards the opponent and hitting counter)
– Did I mention the screenshots are gorgeous?
– Arkham Knight isn’t just the name of the game.. it’s also the name of the [new] villain.
– Fear Takedowns. ie, burst out of grate, action slows down allowing you to target another goon for another attack and so on. Can be used on groups up to 3 as long as they’re close enough together and no one has already spotted Batman.
– They seem to try to tackle the old school Arkham issue of “open door – black screen loading”
– The game looks gorgeous. Huge.
-“This is a single-player game. There is no multiplayer.”
– You can launch into a fast glide from the Batmobile just like the trailer.

Below you can view the April covers of Game Informer, which will contain a massive feature article. 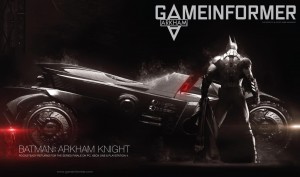 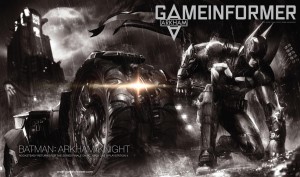