Words with THE Batman

In Batman’s 75 year career, there have been many highs, and many lows.  Outside the comics, most notably Christopher Nolan’s The Dark Knight Trilogy (high) and Joel Schumacher’s Batman & Robin (lower than low). However, to this generation many consider the 1990’s Batman: The Animated Series to be the definitive version of the character. There were so many great elements of that show that it’s hard to pick out one reason why it became such a success.

But we know. The show’s success could simply be on the shoulders of the lead character, Batman/Bruce Wayne, and the man portraying him. His name is Kevin Conroy, and to many fans he is the Batman. The voice we all hear when we read the comics and picture in our heads when we imagine the Dark Knight talking. 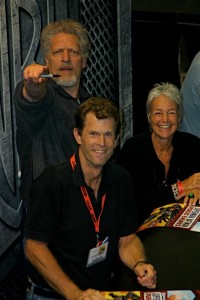 DC Comics caught up with the legendary actor at a recent event, and was fortunate enough to go back in time with the actor to his first days/memories of the show, with intentions that were no joking matter.

Actors always want to do the thing that’s most out of their realm. So of course when I went in, I wanted to read for the Joker, for Bullock, for Commissioner Gordon… I wanted to read for all the character parts. Finally, Andrea Romano pulled me aside and said, “Don’t you get it? It’s called Batman. You would be in every episode! This is the role you should want!”

So  I asked if I could try a different voice for Batman to make him really disappear in the mask. It doesn’t make a lot of sense to me that he’s the most powerful, wealthiest, most eligible bachelor in Gotham City, yet he puts on a cape and cowl and no one knows it’s him. So I suggested an alternate voice to really play up the mystery behind it which brought a little character into it for me, and made it a lot more fun.

Fun for him, fun for us, fun for FOX ($$$). The show, now 22 years later, has become one of the greatest animated series of all time (one of my FAVORITE shows) and is still looked at as a golden standard for the superhero genre. And it’s a relief to read that after all of this time, and success, Conroy’s approach to the character hasn’t changed.

He’s a complicated guy, and that voice can’t be just a quirky voice that you as an actor put on. It’s a state of mind that you have to get into because that voice comes from such a deep well of pain. If you don’t really do it genuinely, it sounds artificial. It sounds like you’re just putting on a funny voice. You really need to invest it with a lot of emotion and a lot of backstory. At least, that’s what I’ve found.

Or maybe that’s just me. After all, I’m an actor and I come from a pretty serious theater background. So maybe I’m just reading all that into it.

I couldn’t imagine another voice behind the character, and neither can thousands of other fans. The good news is that we haven’t seen (heard?) the last from Convoy. He’s voicing the character once again, for the upcoming animated movie Assault on Arkham, set to be released later this year.

Looking for a New Car? How About a Street Legal Batmobile?