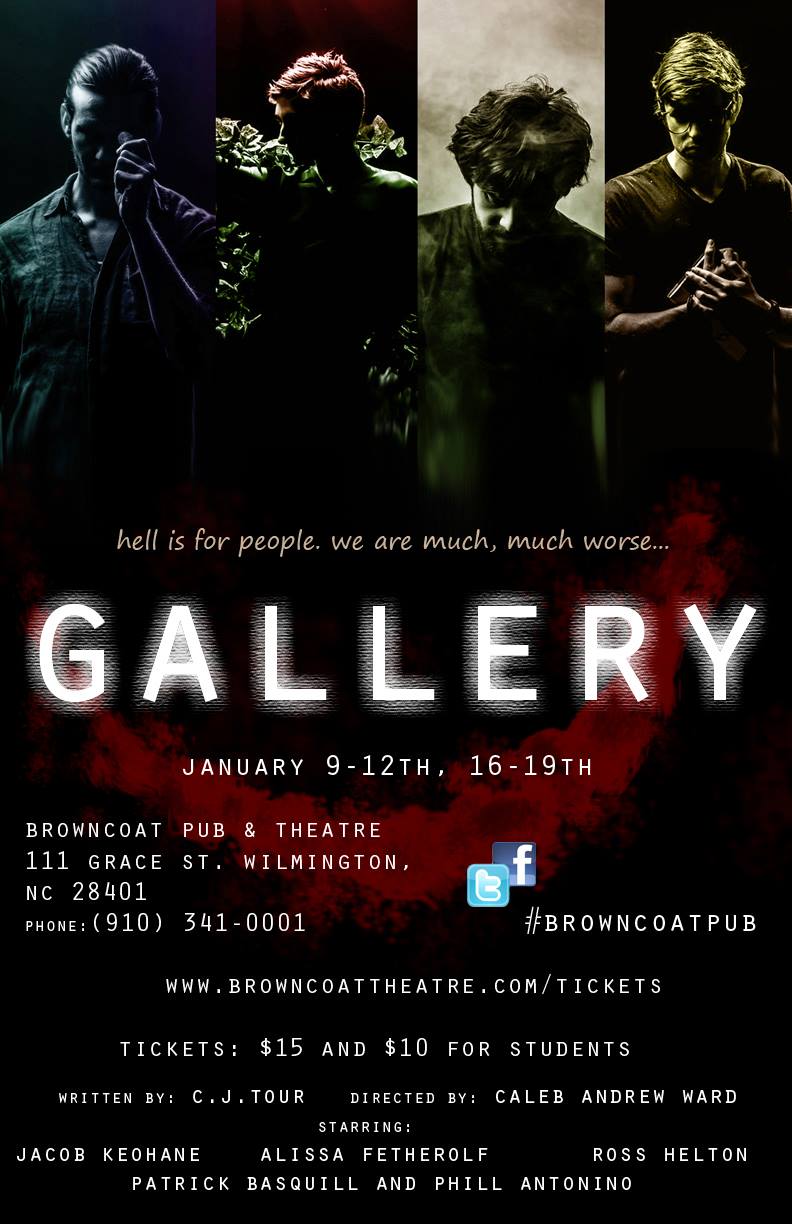 In Wilmington, North Carolina, five of Batman’s most notorious rogues will be starring in a play at the Browncoat Pub and Theatre. The play, a psychodrama entitled “Gallery,” focuses on The Riddler, Poison Ivy, The Joker, Harvey Dent and The Scarecrow, who were left behind during a mysterious breakout at Arkham Asylum. As they wait for the Batman’s arrival while still stuck in their cell, they contemplate who orchestrated the breakout and why they were left behind. The play opened Thursday and its final showing will be Sunday, 12 January from 5:00-7:00pm.

“Gallery” has a bit of local mythology behind it — it was written by former Illinois State University student C.J. Tuor, but found its way to the University of North Carolina in Wilmington through the hands of theatre professor Chris Marino, who then recommended it to the STAGE Company, a student-run theatre company. After a one-weekend run in November, the script was brought to Caleb Andrew Ward, a senior creative writing and film studies major at the same university, who would become the play’s director.

Ward admits that theatre is a bit out of his comfort zone, having never directed a play before, but his interest in the script is what inspired him to do it. “I’m really intrigued by how people react when they are confined and forced into situations, as these characters are,” he says.

Of course, as with any adaptation of these characters, Ward faced the difficulty of portraying them in such a way that it would please both new audiences and die-hard Batman fans. He spent a long time researching the characters through reading lots of comics, but his faith also lies in the actors whom he believes have managed to capture their roles successfully. “The cast I have right now have all blown me away,” he said. “This is new material and has only been performed once before, so they really have nothing to reference. These are fresh performances and they are bringing something new to the table.”

The Browncoat theatre is small, seating only 60 people, but Ward says that the “claustrophobic” nature of the play fits that sort of environment. “The characters are stuck and can’t leave, and I want the audience to feel stuck in Arkham with them,” Ward said.

Having already received excited audience reviews, “Gallery” is an intense psychological thriller. “It’s really good,” said one audience member during intermission. “It’s really great. It’s actually so good that I can’t wait for intermission to be over.”

The play apparently features some more adult themes as well, as another audience member revealed. “When Harvey smashes…Poison Ivy on a table,” she said, “it’s so hot but yet it’s so bad. I don’t know…it’s like that silver lining between rape and consentual sex.”

While the Browncoat Pub and Theatre YouTube channel features a teaser and a clip from the play, whether or not a full video will be made of it still depends on the actors, director, and theatre.

The Scarecrow is played by Patrick Basquill, The Joker by Phill Antonino, Poison Ivy by Alissa Fetherolf, Two-face by Jacob Keohane, and The Riddler by Joseph Ross Helton. As to whether or not the play may be performed anywhere else, we’ll just have to wait and see.