Story Plot: After many years on the run, Calvin Rose returns to Gotham City to investigate the fallout from “Night of the Owls.” Is the Court of Owls finally defeated? Could Calvin Rose finally have freedom from the Court?

RATING: ENJOYABLE ISSUE, read to start the first issue of this story arc.

Reaction: Writer of Batman, Scott Snyder, has given us a run on an original story arc called “Night of the Owls.” At which Snyder could not have done by himself without his protégé, James Tynion IV, who co-wrote the story arc with Snyder. Snyder wanted to continue the story arc, but he could not find the time to continue it. So, Tynion stepped in to continue the story arc with a new character called Calvin Rose. Since Issue #0 of Talon starring Rose as one of the Talons who escaped from the Court of Owls, Tynion has brought a comic book that might stand the test of times. From the beginning, Tynion created a character that is not only likeable but is also enjoyable to read. Now, in Issue #1 of Talon, Tynion sets up this issue for a bigger story line in the making for future issues.

Praises: From the beginning of Issue #1, you’re given narrated voice-overs by Calvin Rose who explains the history and power of the Court of Owls over Gotham City. If you haven’t read Scott Snyder’s “Night of the Owls” story arc in Batman. These voice-overs will help you learn about the Court of Owls. However, if you have read the story arc; then this is nothing more than a quick page turner. Still, you should read the voice-overs because Tynion introduces another aspect of the Court’s power over Gotham City. Tynion uses a lot of voice-overs throughout this issue to explain what’s going as well as give a personality to Calvin Rose’s character. At this point, it’s okay to use a lot voice-over for this comic book because it just started. However, down the line, Tynion is going have to layoff of the voice-overs and allow his dialogue to propel the book. So, for right now the voice-overs play a huge benefit in this comic book.

The art by Guillem March is spot on. Ever since his departure from Catwoman over the summer, we have been patiently waiting for his return to Batman comics. He has come back in a really cool way giving us a scruffy portrayal of Calvin Rose. The best part about March doing this comic book is that he is able to work freely. Since Talon is a new character in the Batman Universe as well as in the DC Universe, March is able to draw Rose in any way he wants. So, this gives March tons of freedom to create new villains, new settings, and so much more. The best scene in this comic book by March is when Rose jumps off a GCPD blimp and glides down into Gotham City. It is surely an iconic scene for this soon to be epic comic book.

Seriously, I am looking forward to future issues of Talon. Even though, the “Night of the Owls” story arc is long gone. The Court is still alive with an army of thousands waiting to take back Gotham City. Tynion has a good long term story line, and all he needs to do is move away from the voice-overs. 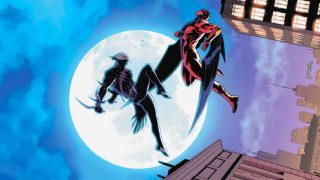