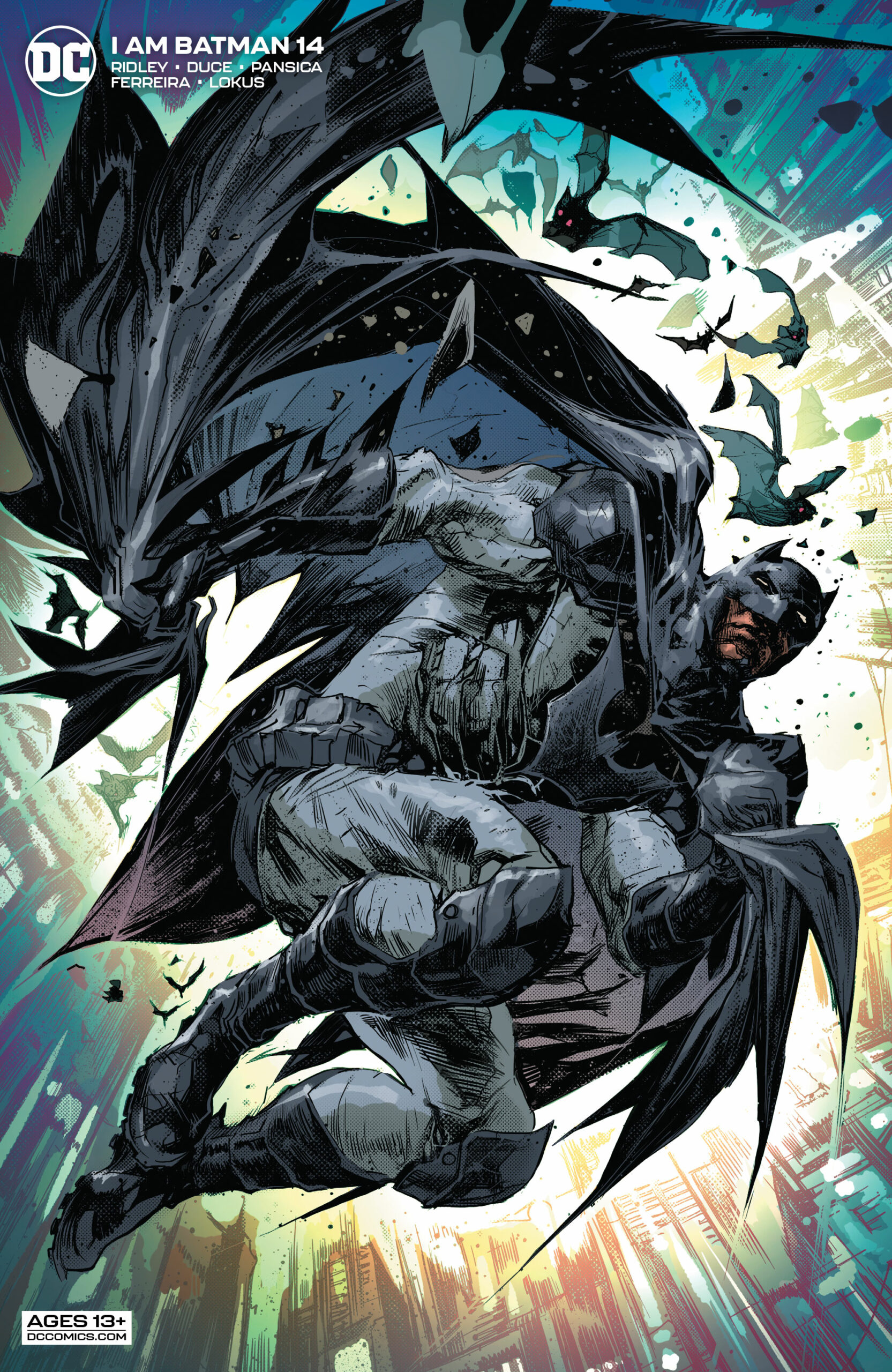 In I Am Batman #14, The mystery of a pair of brutal murders is solved, a hero is born, and a mantle is passed. The conclusion of the intense “She Got Next” saga will reverberate from New York all the way back to Gotham City as it sets up the next chapters for both Jace Fox and Renee Montoya.

The issue begins with the masked heroes confronting and subduing Anarky’s killer. With this murder mystery solved, Renee is left with the decision to take the job as Commissioner of the NYPD or return to Gotham. 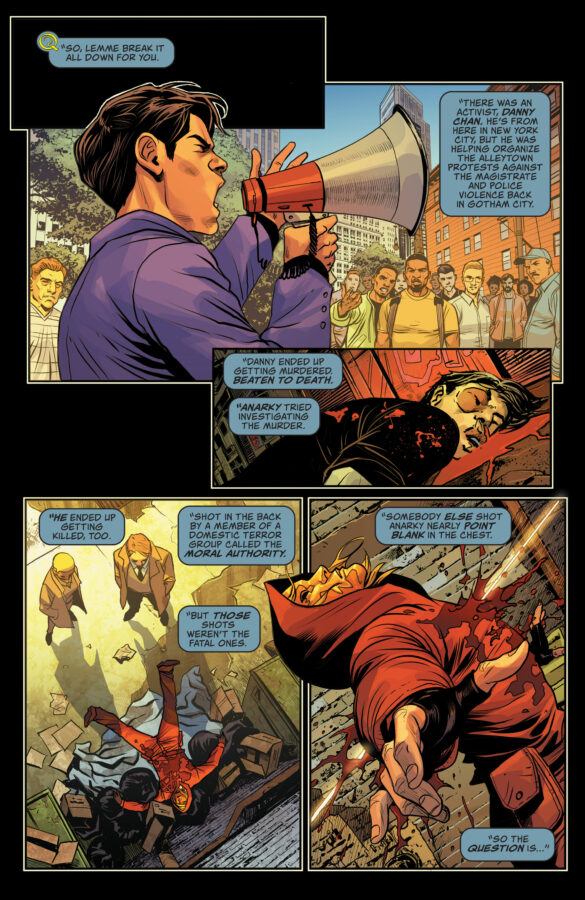 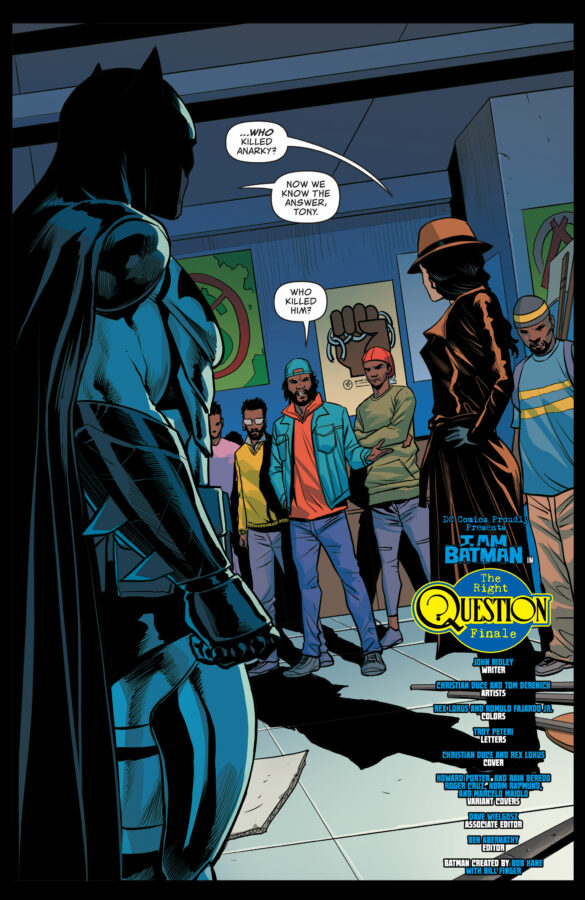 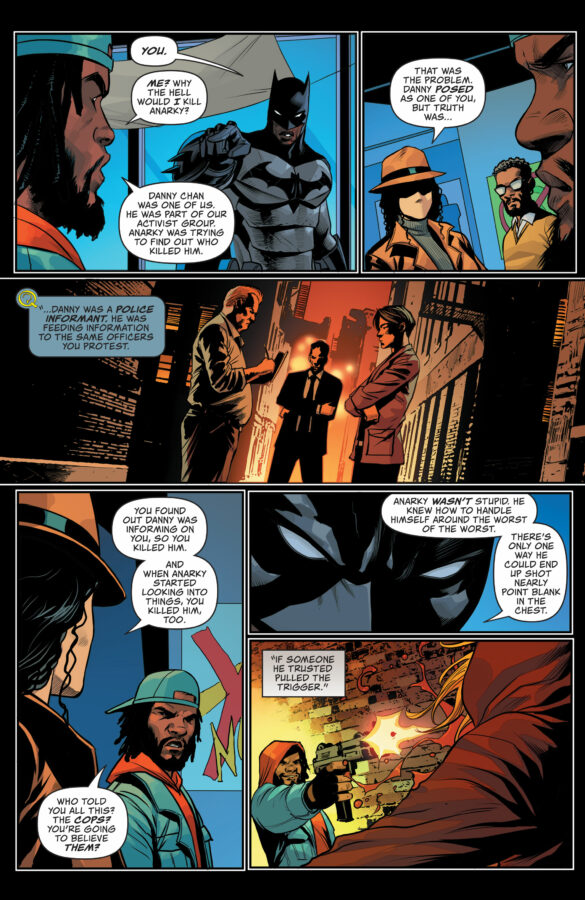 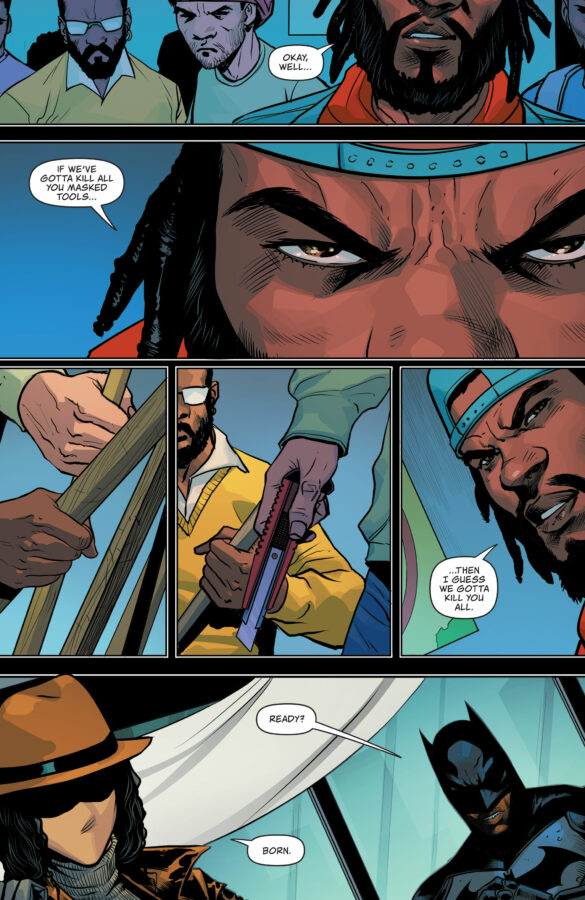 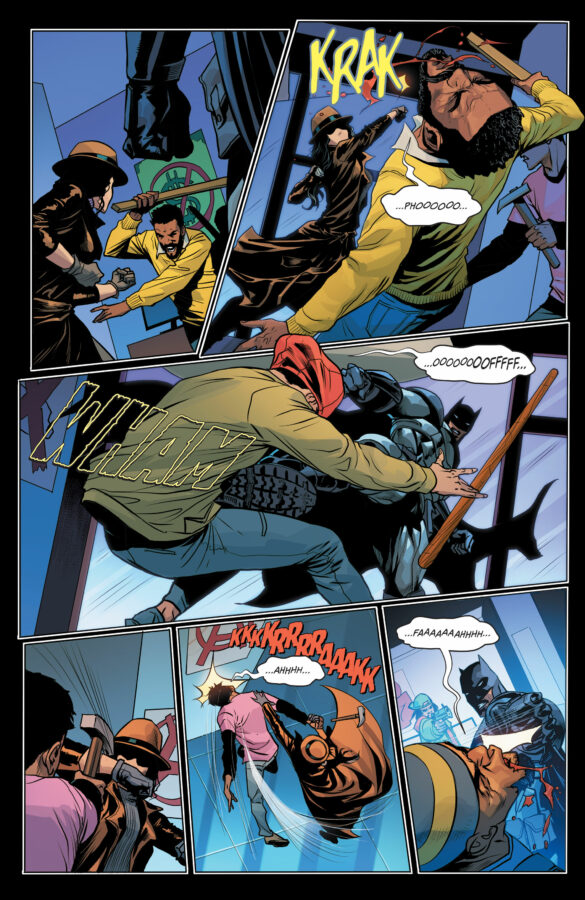 This is addressed in Renee’s discussion with Hadiyah as she reveals her intention to return to Gotham. It now seems evident that Ridley wasn’t really intending to poach her from the Gotham titles at all, it seems rather that he was laying the groundwork for his upcoming GCPD: The Blue Wall miniseries. After reading these past few issues with Renee guest-starring, I’m looking forward to seeing what he’s got planned for that title.

I’m rather intrigued by the fact that Renee and Hadiyah seem to have some history together. Hadiyah mentions Nanda Parbat, the mystical Himalayan city that figures largely in Deadman’s backstory. As Montoya also freely mentions Vic Sage in this conversation, it appears that Hadiyah knows about Renee’s secret identity. I suspect that Hadiyah has a significant untold history as Ridley has had her as part of Jace’s cast since Batman: Second Son. Hopefully the writer will soon start revealing more about her past.

The issue ends strangely, with Detective Whitaker making some very pointed comments to Batman. Angered, Jace attacks Whitaker, apparently killing him. However, something seems off about the cop. For one thing, the verbal attacks seem rather out of character, but the main indicator that things aren’t what they seem is that he’s colored with a gold tinge and a yellow aura. The next issue blurb gives a hint about what’s going on: “Next: Dark Crisis of the Soul”, implying that this ties in with DC’s Dark Crisis on Infinite Earths event. Plus, if you’ve read the online solicitation for I Am Batman #15, then you already have a good idea what’s going on.

I have mixed feelings about the other important occurrence in this issue. We see Tiff’s debut as a costumed crimefighter… or do we? Is it Tiff? I admit to being rather confused. So far she’s been drawn as a preteen or young teen girl – about 12 or 13, but the masked heroine shown here in a skin-tight costume appears somewhat taller and more “developed” than Tiff has been shown, even as recently as last issue.

So, is this an artistic error, with Tiff being drawn as older? Or has the apparent build up to Tiff taking on a crimefighting identity been a red herring? If so, then who could it be? There only seem to be two options: a complete stranger, which would seem rather random. Or Jace’s other sister, Tamara. The thing is, Tam still needs a cane to walk, so how can she be out fighting crime like this? Unless perhaps she’s faking her mobility issues. It’s a rather confusing issue, although I’m sure Ridley will clarify what’s actually going on. 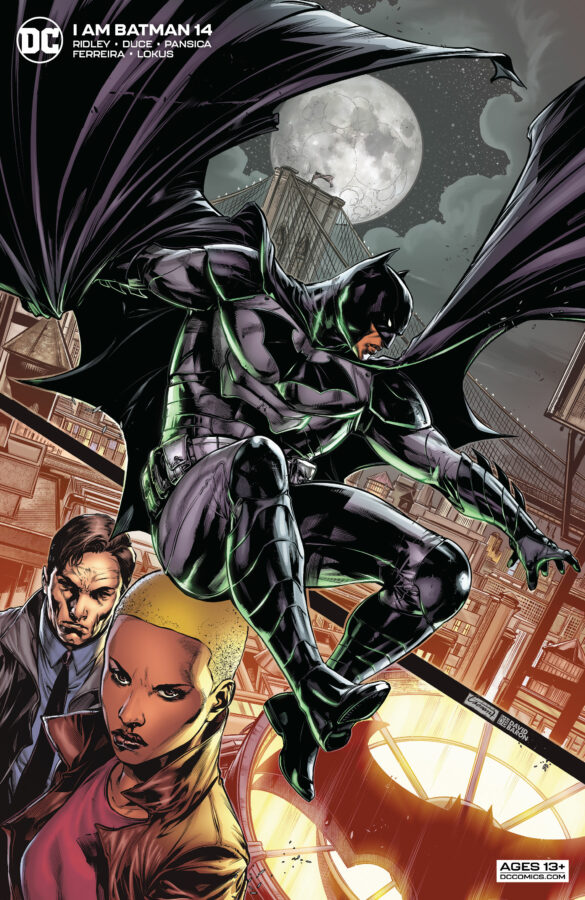 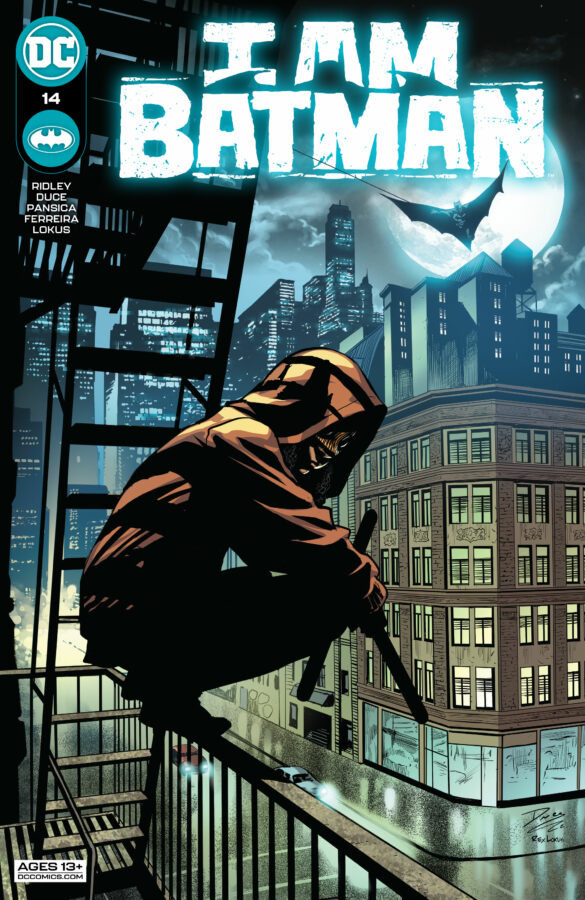 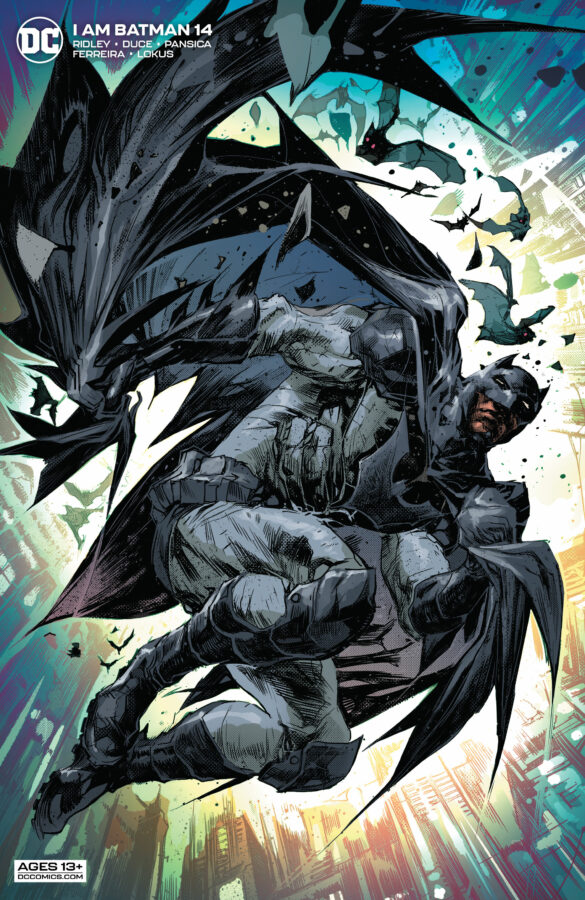 I did also find the very brief resolution to the mystery of Anarky’s murder to be somewhat anti-climactic. They just tell the culprit that they know he’s guilty and why. Then a very brief fight occurs in which Jace and Renee thoroughly trounce the villains, meaning that the mystery that’s driven the past two issues is wrapped up in just a few pages.

Despite a few drawbacks, I still found I Am Batman #14 to be a very enjoyable issue. Ridley’s been doing an excellent job on this title so far, so I’m not too put off by this issue’s imperfections. It’s only seen a slight dip in quality, so I’m still really excited to see how Ridley deals with Jace’s first dealings with the wider DCU in his first major crossover event.