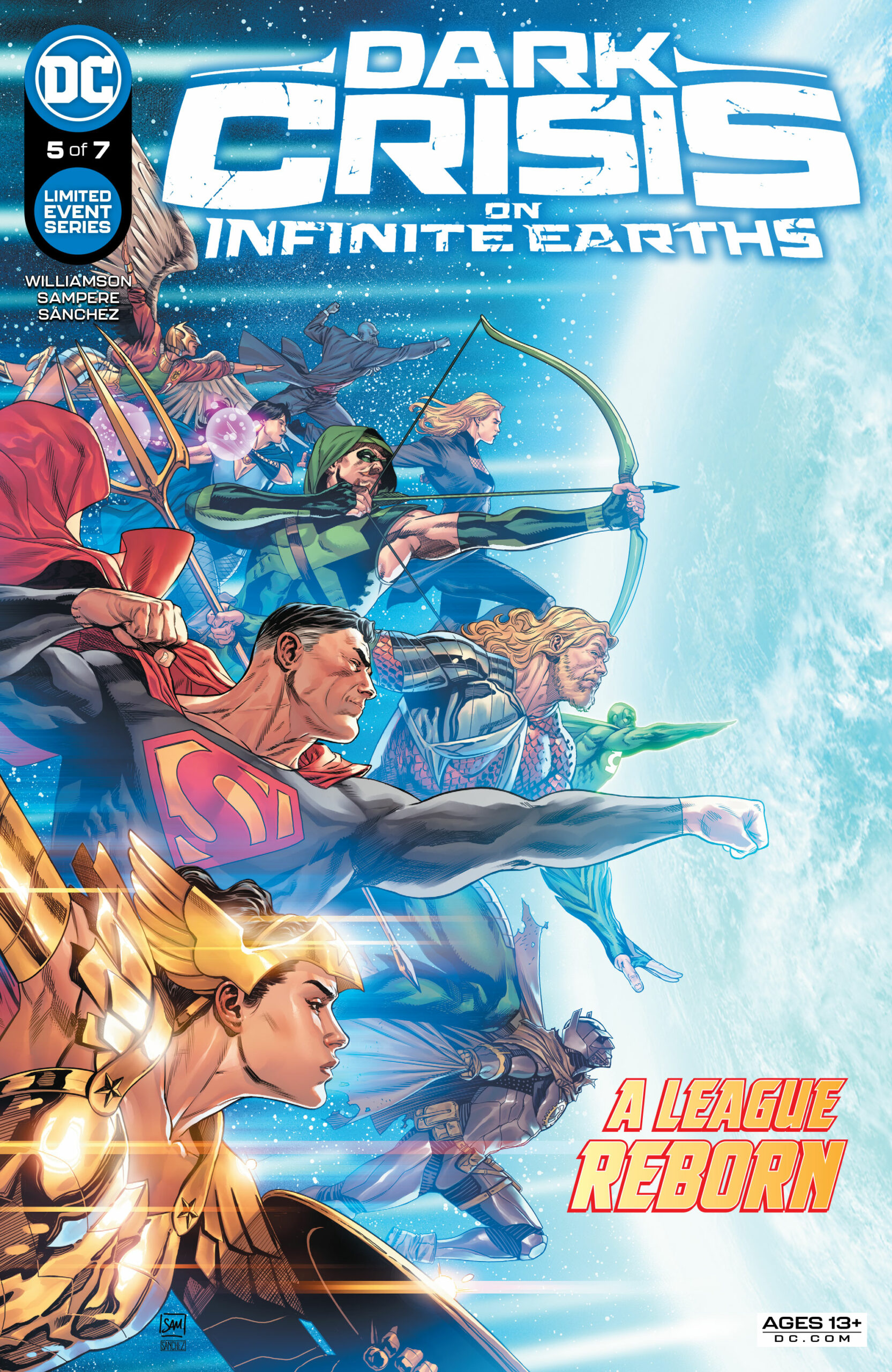 DC’s heroes unite against the Great Darkness as its forces turn their attention to Earth-0, in this month’s Dark Crisis on Infinite Earths #5.

Last issue, Pariah harnessed the energy of the presumed dead Justice League to restore the original Infinite Multiverse that was destroyed in Crisis on Infinite Earths (COIE). We now know that the Justice League isn’t exactly dead, instead, Pariah created “paradise” worlds to trap each League member and then used these pleasure prisons to siphon energy from the heroes to recreate the Multiverse. 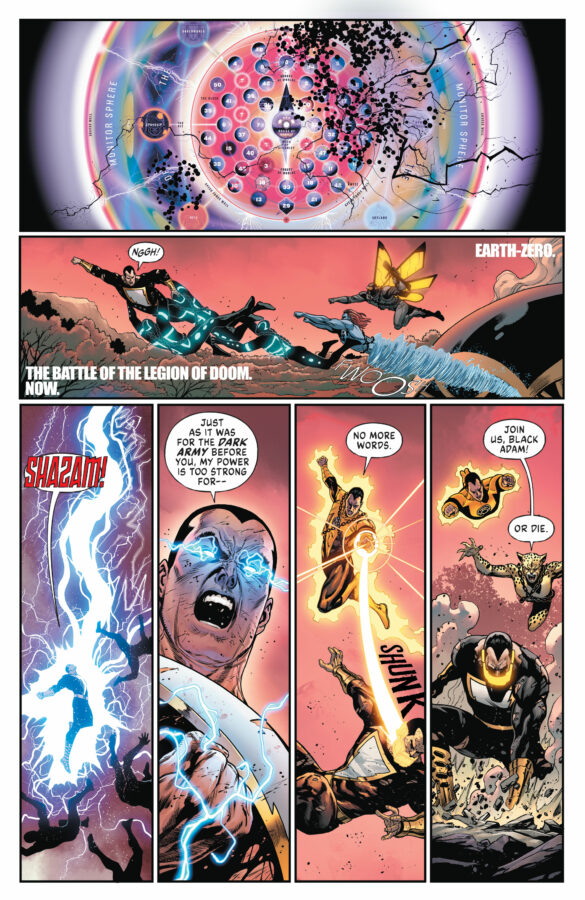 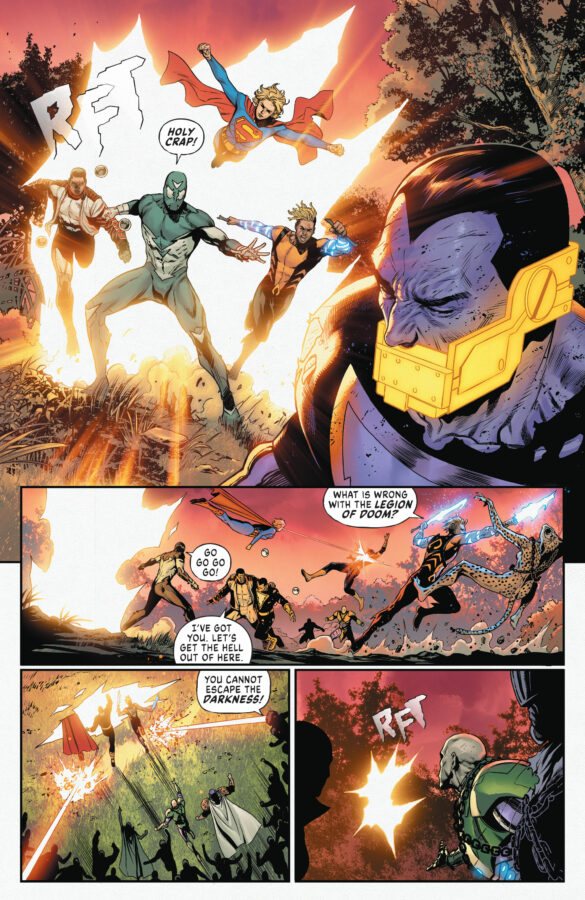 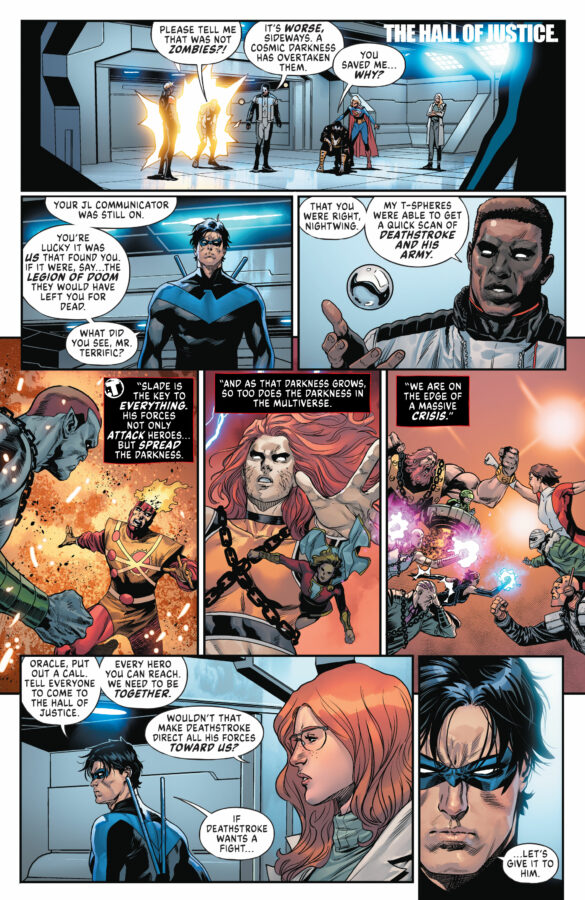 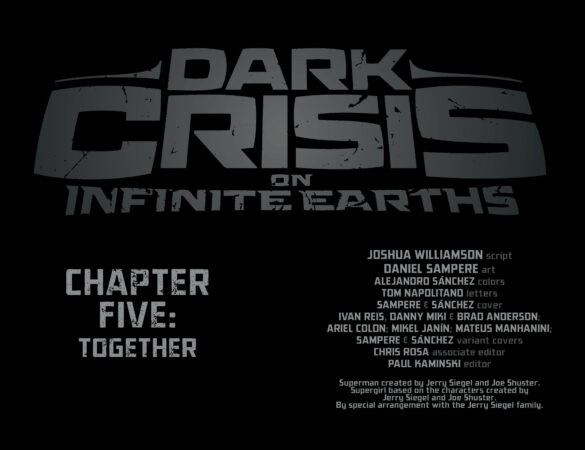 His plan seems to have worked, even though things went a little bit pear-shaped when Hal Jordan freed Barry Allen. Using The Flash’s superspeed, the two heroes started jumping from world to world, rescuing each hero. In this week’s issue, Bary and Hal continue their mission to reunite the League. Upon finding Superman, they manage to summon the rest of the trapped League and then confront Pariah. When the League arrives in Pariah’s domain, the villain panics, as his new Multiverse becomes unstable without the League’s energy to power it.

The heroes break into teams. The Justice Society volunteers to investigate the Great Darkness as it spreads across the Multiverse while the Titans then agree to stay behind and take on Deathstroke. John Kent then suddenly appears carrying a machine, which he claims is the one Pariah used to start the events of COIE (see Dark Crisis: The Deadly Green #1). Mister Miricle then agrees to study the device while Damian Wayne and Doctor Light team up for some unknown wacky, side adventure.

Dark Crisis on Infinite Earths #5 (DCOIE) delivers the equivalent of literary whiplash. Joshua Williamson shifted gears last issue and now this book is in overdrive mode. The plot beats for the issue move incredibly fast, as the reader’s bounced around from one scene to the next. Frankly, it’s about time too. The first few issues of DCOIE puttered around at a speed that seemed very slow for a Crisis level event.

With this increased pace also came a ratcheting up of tension. With the Justice League back in action, Pariah now has to fight on two fronts, as he tries to execute his master plan. Here Joshua Williamson manages to set a trajectory for the rest of the series, as the issue’s cliffhanger ups the anty. What’s particularly great is how Williamson manages to tie things back to COIE. He uses important, yet often overlooked, plot points from the 1985 classic to develop his current narrative. The final scene of DCOIE #5 is incredibly exciting and will leave most fans gobsmacked.

As DCOIE finally finds its footing as a legitimate all-out Crisis, Daniel Sampere has also found his footing as a “Crisis” artist. Please understand that this is not a criticism of the book or its creators. DCOIE has been solid so far, but it’s also been very different from the typical Crisis level event, in terms of both pacing and threat levels. However, DCOIE #5 not only reads more like a normal Crisis, but it also looks like one. 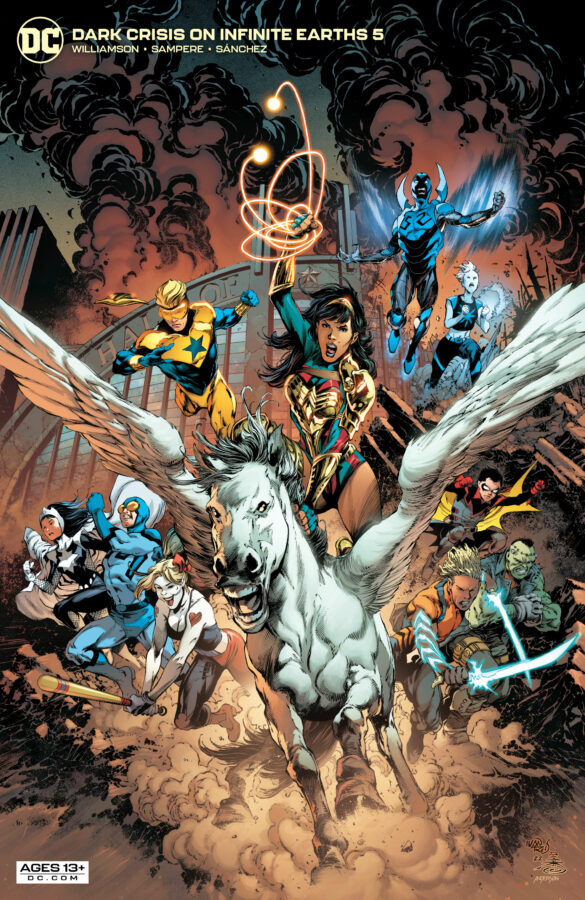 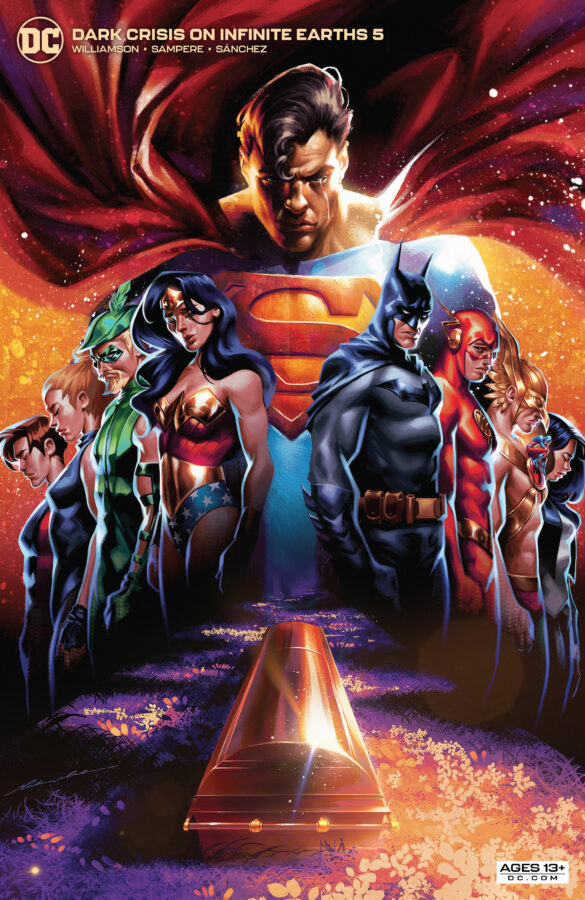 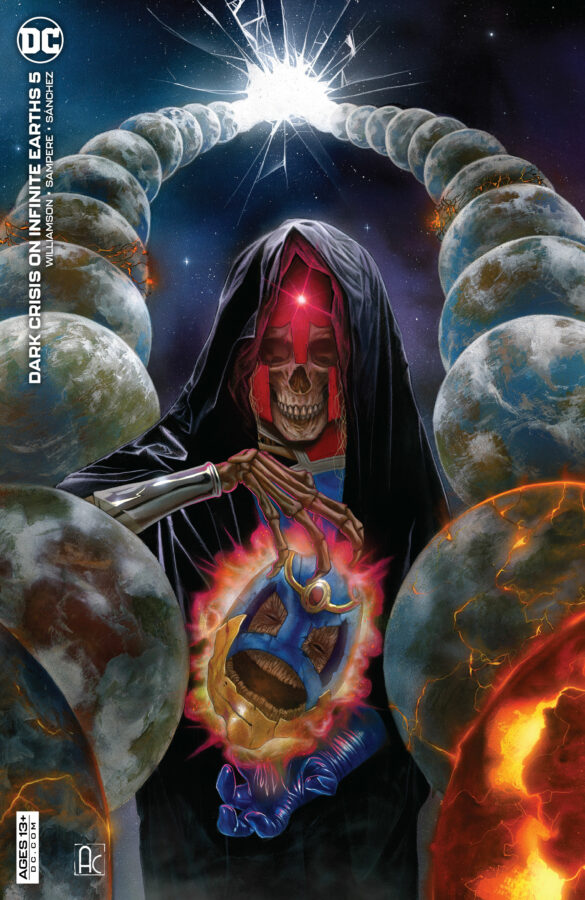 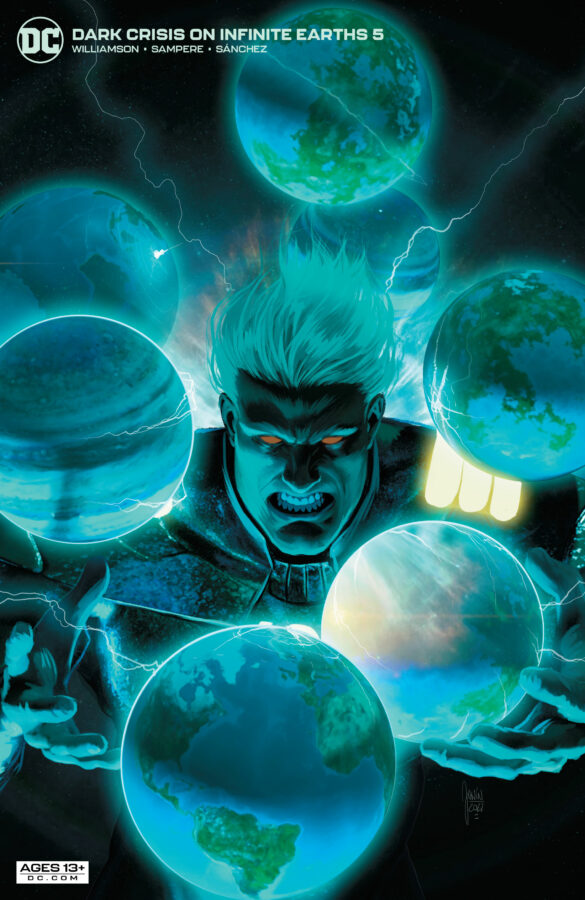 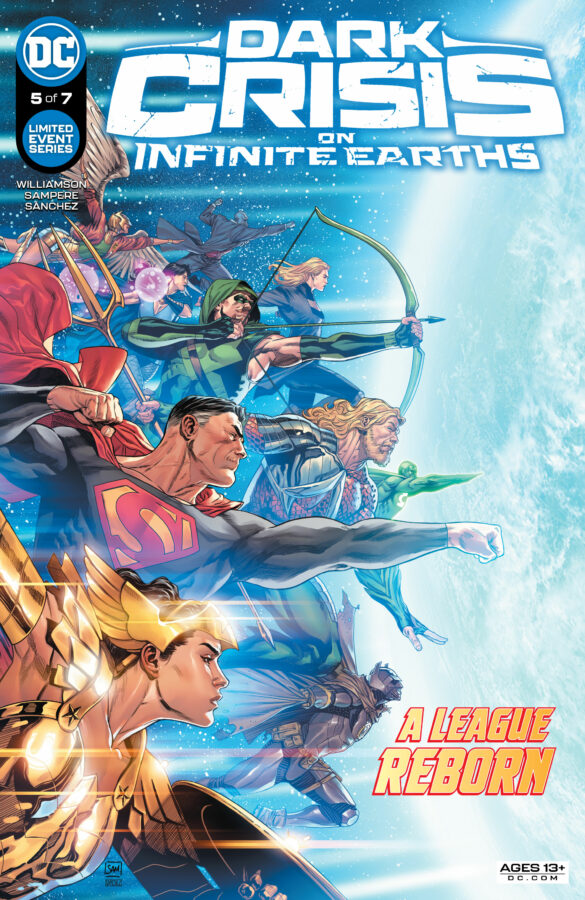 Sampere gracefully manages a large cast, as there are unsurprisingly a billion heroes and villains to juggle in a story like this. His work is detailed, grandiose, and just flat-out beautiful. Once again, Sampere has proven he’s ready for the big leagues. He’s an A-lister. It’s as simple as that.

Dark Crisis on Infinite Earths #5 is a tour de force. Williamson pens an exciting issue that pays homage to the past while hinting toward DC’s future. Sampere’s art is spot on, as he continues to show off his impressive skills at visual storytelling. Overall, this issue finally has the scope and pacing that I’ve wanted from this series all along. Dark Crisis on Infinite Earths has finally lived up to its name.

Final Verdict: Wear a neckbrace for this one, folks, because this ride is wild.