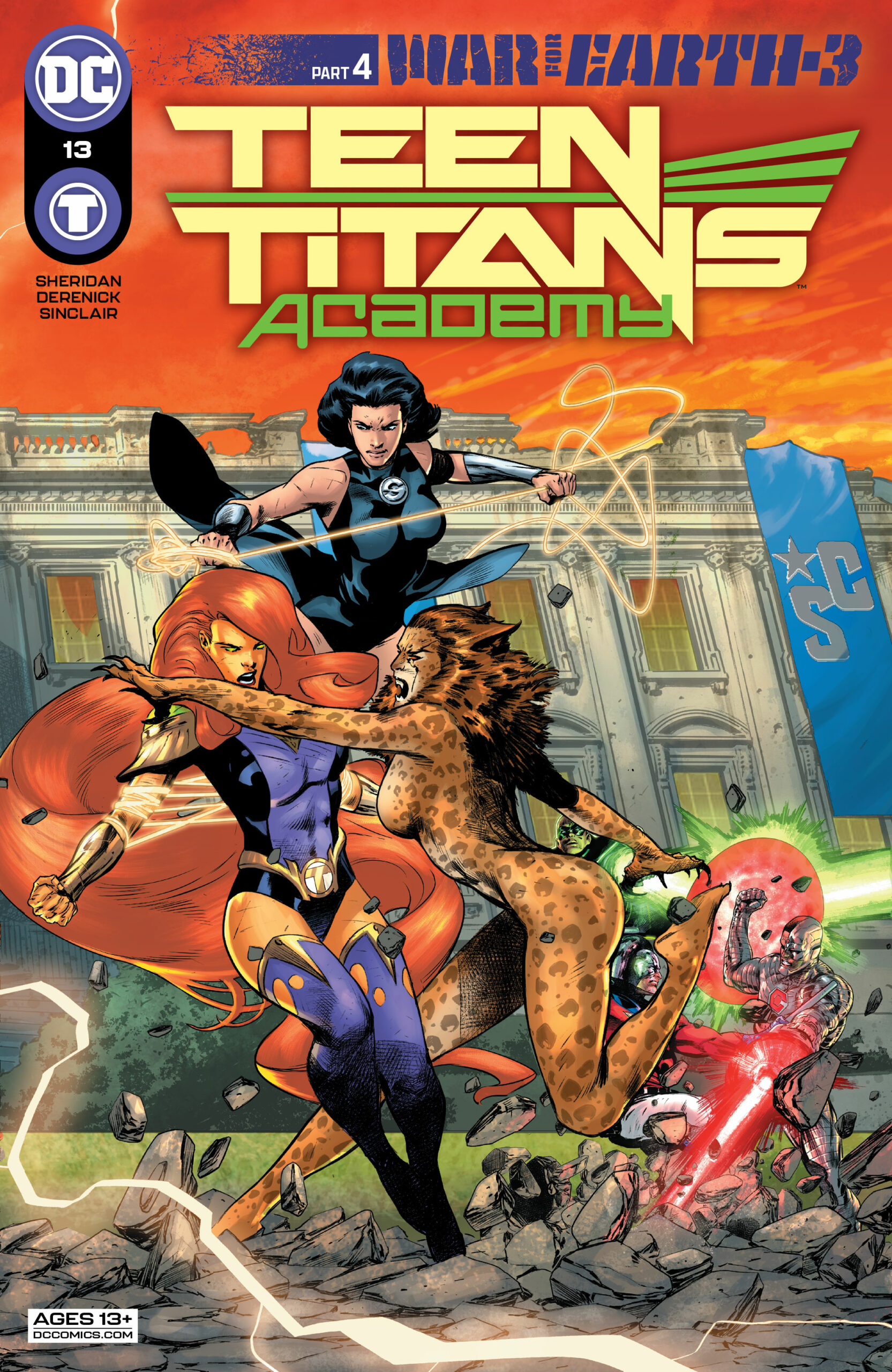 Caught between the Suicide Squad and the Crime Syndicate, the Titans fight to free a missing academy student from Amanda Waller. With time ticking away towards when the team must return home or risk being stuck on Earth-3 forever, they all face an impossible choice. This is Teen Titans Academy #13.

With the destruction of Titans’ Tower last issue, the latest chapter opens with the school set up in its new home. It looks to be an old factory or warehouse that’s been converted to serve as a school. It’s not specified, but it appears that this is a temporary home until a more permanent home for the Academy can be arranged. The kids refer to it as the “safe house” and there is mention of a new tower, but the old building is an interesting contrast to their former high-tech headquarters.

I have to wonder why Rick Flag turns to the Titans for help rather than the Justice League? Maybe because the two teams have encountered each other before? Also, how did Flag know about their new headquarters? It doesn’t seem like they’ve been there long, and I don’t think they publicly announced the school’s new location. Maybe I’m just being overly suspicious, but I wonder if Flag has some other hidden motive for invading the Titans’ headquarters.

It makes sense for Wally to be hanging around the Academy, given his history with the Titans, though I wonder if this means that he’s rejoined the team or is just visiting. DC has hinted that the Justice League is about to meet a disastrous end. So, perhaps Wally will be free to rejoin his old team in the near future.

I liked seeing that Wally takes a bit of time while at the school to hang out with his namesake cousin. We haven’t really seen the two together much, except for a few times during Joshua Williamson’s run on The Flash.  It would be nice to see more of them together, either here or in the Fastest Man Alive’s own title.

The senior Titans set off with the Squad to Earth-3, leaving their students in the care of Roy. However, we see that a group of students has stowed away on the T-Jet. It seems doubtful that the youngsters are ready yet to face a situation as dangerous as the War For Earth-3 is likely to prove. Hopefully, they will all survive the experience. Given that a number of them are new characters created by Tim Sheridan for this title, this isn’t guaranteed and Sheridan likely has the freedom to kill off any of his new characters. After all, he’s already done so with Brick.

It also seems like the merging of Changeling and Cyborg as seen in Future State is about to happen. At least that’s what the implication seems to be. Although much of that timeline appears to have been averted, Raven still believes that this part of her vision is still likely to come true. I’m not sure that I like the idea of merging the two characters into one body is a great idea. However, it might prove interesting as a temporary situation for Gar and Vic.

I also loved the reference to the classic Batman 1966 TV show. When the two teams are getting ready to leave in the T-Jet, we hear Donna mention a couple of familiar lines. First, she states, “Atomic batteries to power…” and then, “Turbines to speed”. These lines were part of the process of starting up the Batmobile when the Dynamic Duo would set out to fight crime. This is a nice little reference to this classic bit of DC history.

It’s been announced that Teen Titans Academy is ending with the next issue and this makes me uneasy. Tim Sheridan still has a number of plot threads that have yet to be resolved. Does DC plan on letting him come back to write a future Titans title, or will they be left hanging? Or will Sheridan be forced to hurriedly wrap everything up in a single issue? I hope that DC affords him the opportunity to finish his saga in a worthy manner.

I’m going to miss this title when it ends. Hopefully, Sheridan will be able to pick up his story in the aftermath of Dark Crisis, which looks like it will have some major effects across the entire DC Universe. I’m sure that Sheridan’s ideas for the Titans were part of the overall plan for the DCU, so I doubt that Dark Crisis is going to derail those plans. The question is whether Sheridan will be the one to continue the story. I certainly hope so.

New Life-Size Batman Bust From Sideshow Based on ‘The Batman’