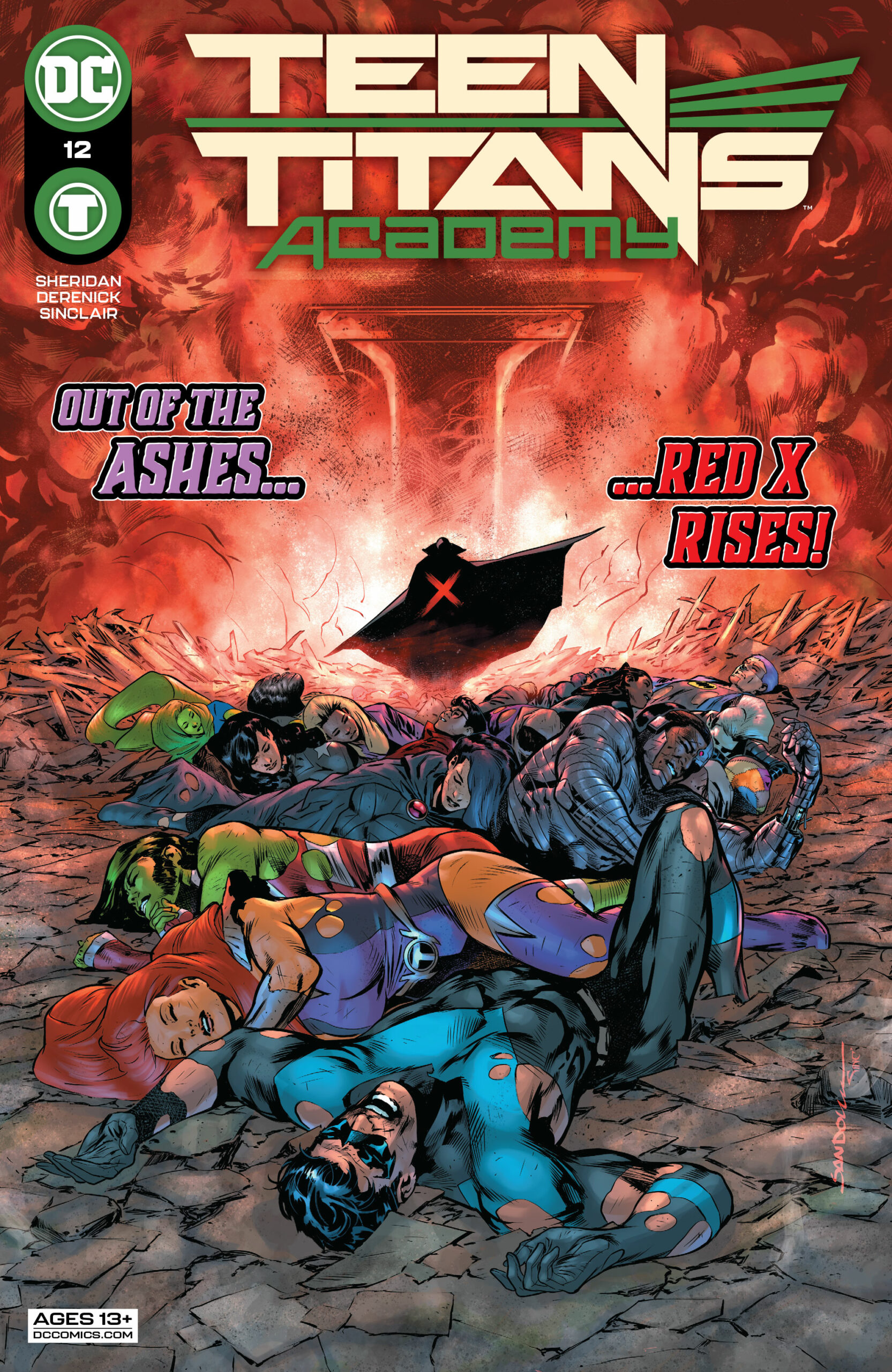 Teen Titans Academy #12: It’s all come down to this! As their lives are literally tumbling down around them, the Titans must contend with the betrayal of their most troubled student, the one who has just unmasked themselves as Red X.

Then there’s a familiar face from deep in their darkest days, someone determined to exact an unholy vengeance upon Nightwing. In the end, after the epic collision of past, present, and future, what and who of the Teen Titans Academy will still be standing?

This is chock full of surprises and revelations, but the biggest reveal is the unmasking of Red X. It turns out that one of the Academy’s students was Red X. While I can’t claim to have figured this out before the reveal, it does seem rather obvious in retrospect.

What is surprising is his motivation, as the mystery man reveals that an original Titan is actually his father. I don’t want to give anything away, but there’s a whole lot of smoke and mirrors around this whole scenario, including the question being raised of exactly how many people have used the name and disguise of Red X. Despite this issue’s big reveal, Tim Sheridan’s keeping most of the Red X mystery intact.

The question is still open about whether or not the Titans have avoided the world seen in Future State: Teen Titans, or whether that timeline is becoming inevitable. The death of Red X does not preclude those events, as the one from that future could be either the second, or perhaps the third. Changeling and Cyborg are both injured in this issue, which might possibly lead to them sharing a body as their Future State selves will, and Raven’s still having visions of a bleak tomorrow. The future doesn’t look too bright. 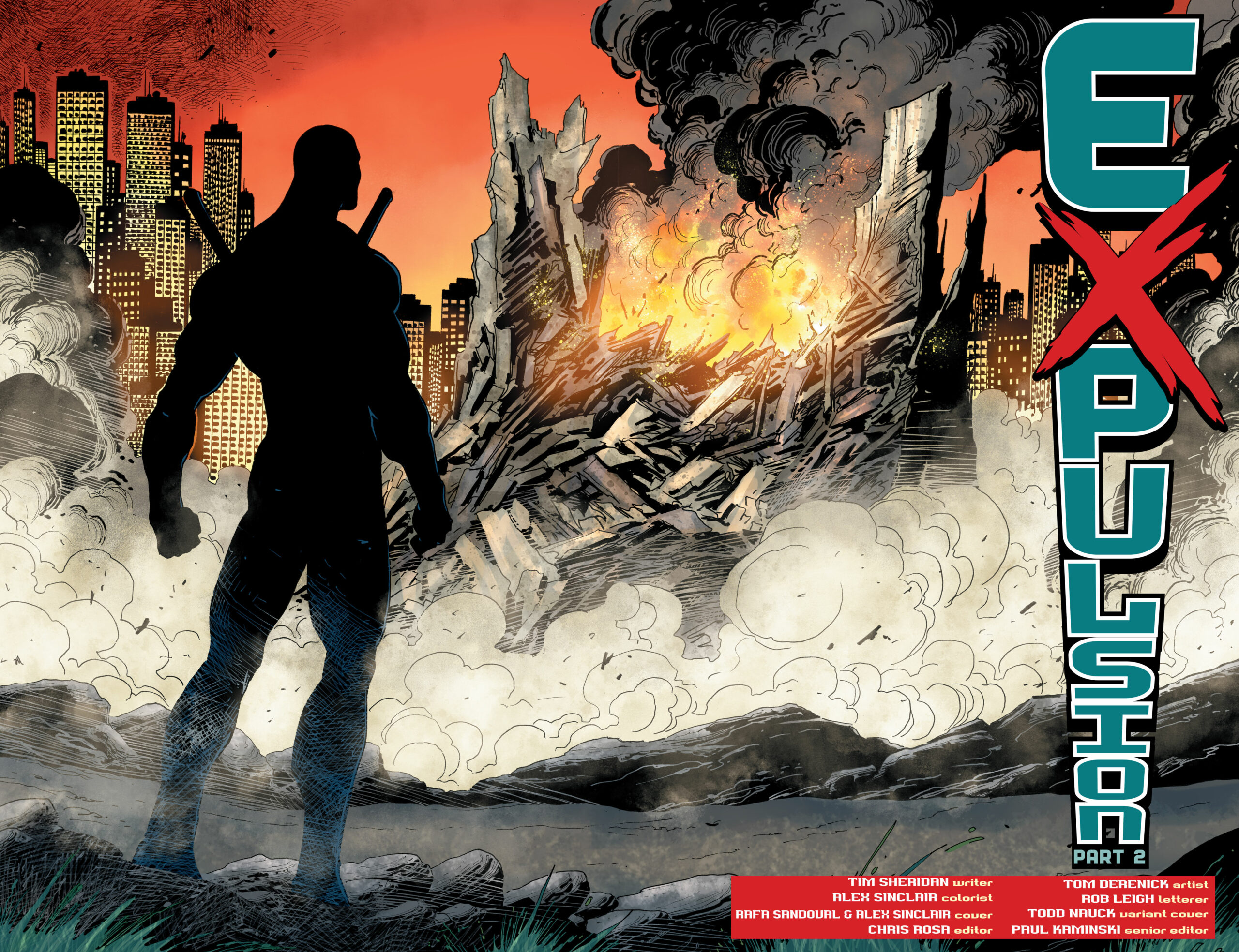 Dick declares his intention to hunt down the second Red X. He states, “There may be only one man who can help me do that…and he’s more dangerous than Red X”. I suspect that Dick is referring to Deathstroke. This is somewhat fitting, considering that Dick created the identity of Red X to get close to Deathstroke – or at least he did in the Teen Titans cartoon. It’s quite possible a similar story happened in the DCU as well.

The Red X reveal, and his eventual fate struck me as not having the impact that it should have. My first reaction to the revelation was to wonder why I hadn’t figured it out for myself. So, I tried to recall what I knew about the character. I realized that I really didn’t know much about him. Some Googling filled in a few details but still made it clear that we didn’t really know much about him at all.

That’s why this issue’s big revelation doesn’t have the impact it should. We hadn’t seen enough of Red X’s alter-ego to have much emotional investment in the character. That’s most likely caused by the large cast in this title. Sheridan really should have made an effort to let readers get to know him. While other characters have had their moments in the spotlight, Red X never did, except as a mystery to be solved.

Despite the diminished impact of the big reveal in Teen Titans Academy #12, this was still a shocking turning point in Sheridan’s story. It does end on a tentatively hopeful note for the Academy’s future. Unfortunately, DC has announced the imminent cancellation of the title with issue #15. I hope this allows Sheridan to bring the story he’s been building to a proper conclusion, or that he’s allowed to finish it elsewhere.