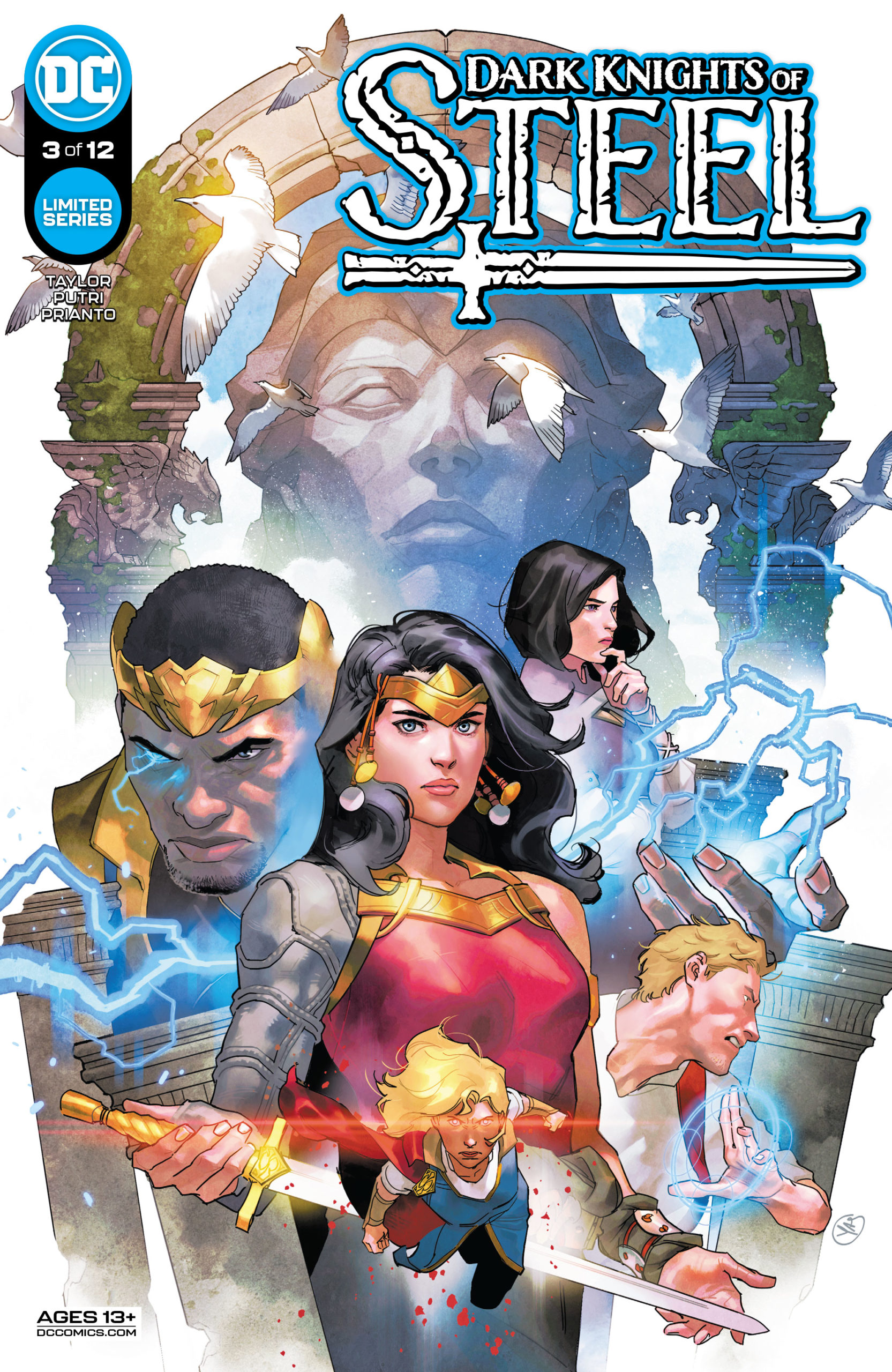 Tom Taylor, Yasmin Putri, and Arif Prianto are putting on one heck of a show! Another phenomenal issue is released this week, and we continue to delve into this brand-new comics/fantasy world. Dark Knights of Steel #3 is alluring, captivating, and filled with magic. It continues to be a beautiful work of narrative, the art is gorgeous and the story keeps getting curiouser and curiouser!

The Dark Knight from the House of El has had his whole world shaken up. His next actions as a leader in battle will impact the upcoming actions. Kal’s Kingdom is under attack, and they have lost their King. It is EPIC to see Amanda Waller in this series, as a knight’s general herself. It fits her character perfectly and she would be exactly the person Bruce needs to snap him out of his identity crisis. I love the mention of the prophecy, there is much more to it than words and I am looking forward to seeing what each line means. Who are the Green men? There must be others who come from the stars? Because as characters we love, and as noble as Kal’s heart is, we know the Kryptonians are not the bad guys.

Okay, I do question the affair Jor-El had with Martha Wayne. Also, Harley’s knock on Krypton having a helping hand if they had a prophecy did kick the wind out of me a bit. I adore her moments in this series, she plays the iconic jester role well.

I need to talk about this universes’ Supergirl/Kara. In this story, her name’s Zala Jor-El, and as the daughter from the Kingdom of El she carries into more pages, and I love it. It’s dark that she committed murder in the previous issue, this series challenges our perception of heroes and it’s thrilling to see. Bruce has also maimed an opponent, so has proven to be violent and merciless, I only fear what Kal will do in this universe.

We also get more insight into Paradise Island/Themyscira, Diana’s world. The set-up of this story is brilliantly played out, as we see glimpses into each Kingdom/Family dynamic. I believe, slowly, they will merge together as characters cross over with one another. We already see Zala enter the territory that belongs to House of El and King Jefferson’s arrival at Themyscira, which all feels like a Game of Thrones situation. The intensity keeps you on your toes. The interaction between Queen Hippolyta and King Jefferson is so thrilling and well-written, the emotions on every page can be felt under your fingertips. It also builds into a deeper relationship between Diana and Zala. Alliances are being made in this issue.

Yasmin Putri is a goddess with her drawings and Arif Prianto’s colors are the perfect fit. I cannot get over the expressions on the character’s faces. Bruce is exceptionally handsome and I will not get over this. These artists have captured the brooding bat in an impeccable light.

The action scenes are swift and stunning, even better than in the previous issue. There’s so much more happening in this chapter than in the last. What we’ve had previously has mainly been world-building, while this issue pulls along the story. The lighting during the diplomatic scenes really intensifies the discussion depicted, for something that may be considered less action-filled, I found the discussion scene to be one of the most captivating in the book. The grief, death, travel, and intensity are beautifully portrayed. I can’t get over the fight scenes and the sea-travels.

The end of this issue really tugs at your heart! The eyes and emotions between Alfred and Bruce are something that only really talented artists could capture. They do a phenomenal job, as you can see how both men are each other’s worlds.

Dark Knights Of Steel #3 is another hit, with another edge-of-your-seat cliff-hanger. Tom Taylor is famous for those. This is one of my favorite issues so far because it’s stunningly cruel, and delivers more of what I’ve been craving from this fantasy world. Interesting political alignments, heartbreak through family and love, and gorgeous art.

I highly recommend collecting this series if you haven’t started yet!