“Warmonger Games” and “A Father and Son Outing” 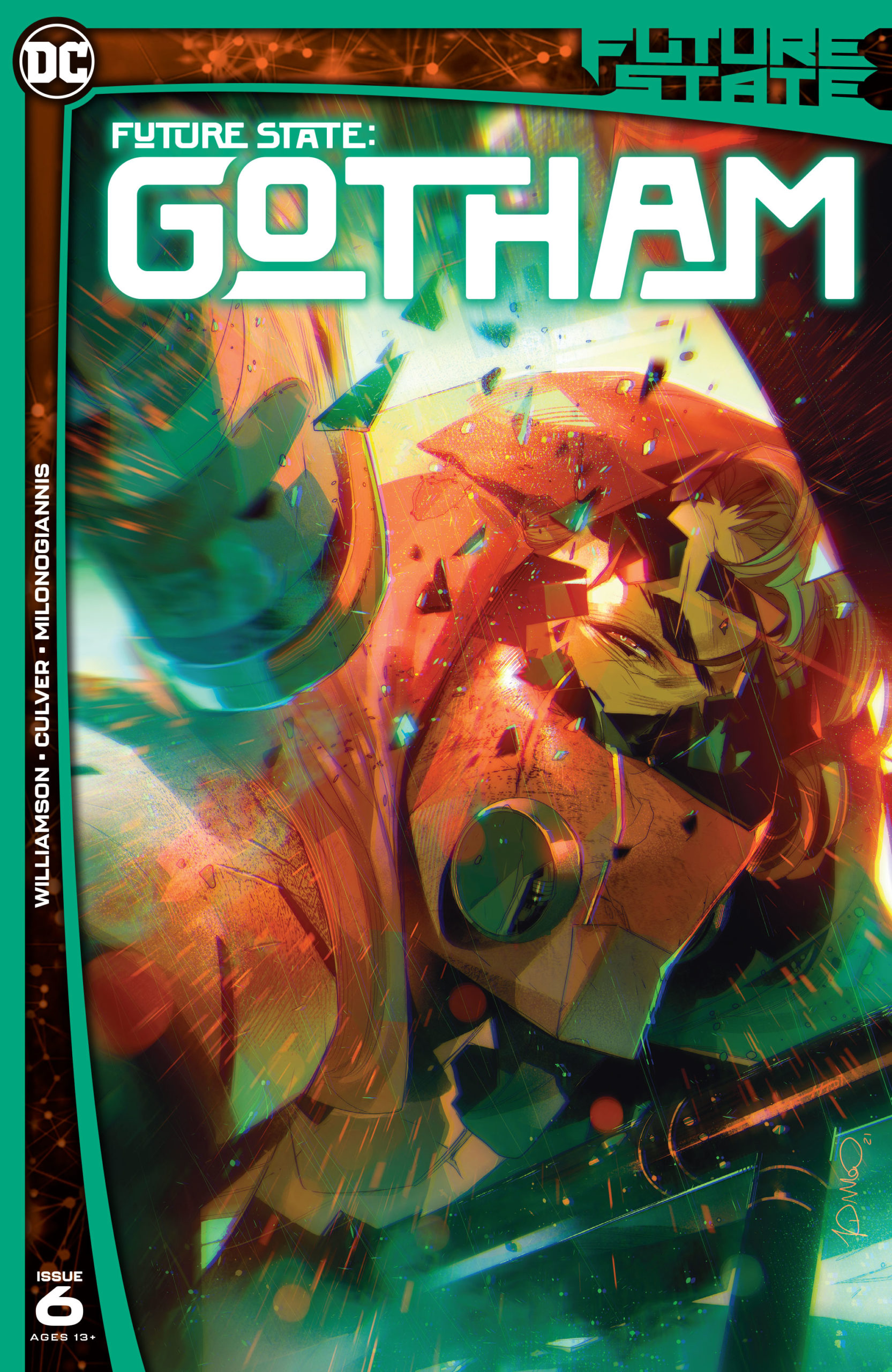 We left off with a cliff-hanger last time… how could they leave us hanging like that?!? I’m so ready to jump into Future State Gotham #6, as I have to know everything! Let’s hope Jason’s plans work out, or the new Batman could be in serious trouble.

Teenagers scare the living $#!+ out of me 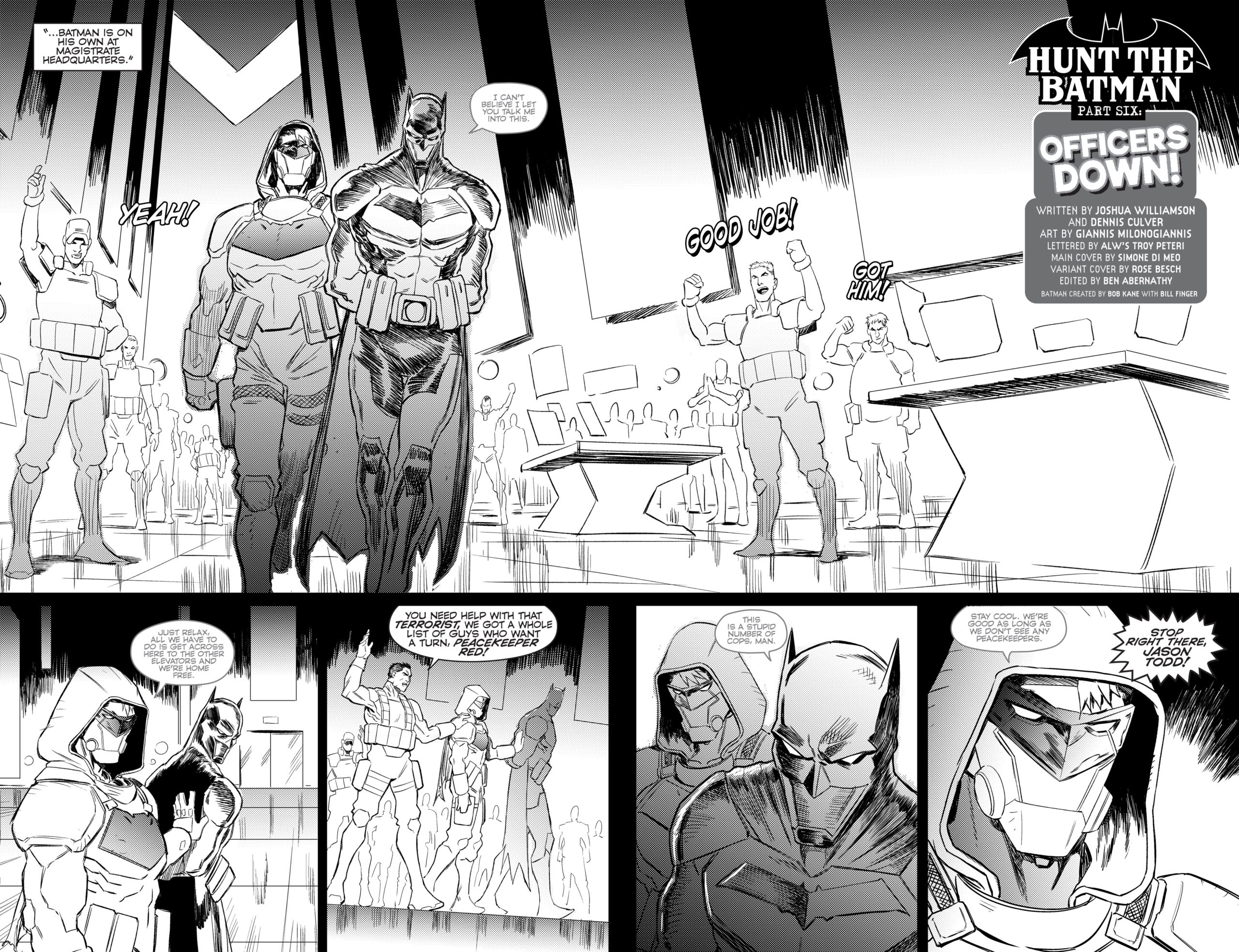 I couldn’t think of a better song to accompany this issue, as most of the Batfam seem to still be teenagers, and oh boy do they scare me! Joshua Williamson and Dennis Culver definitely wrote this scene to scare us. We know what they’re all capable of, but actually seeing them let loose was intense. I wouldn’t want to be anywhere near the Batfam when they start doing damage. Then we have Jason Todd and his excellent ideas… I’m being very sarcastic now, in case that didn’t come across.

Williamson and Culver write Jason so well, so I’m slightly worried about their real-life plan-making skills, as walking the new Batman into headquarters was the most Hail Mary idea we’ve seen from Todd in a while. I have to say I was very much on the edge of my seat for the entirety of Future State Gotham #6. The dialogue keeps getting better and better. With all the one-liners and sarcastic comments, it’s almost as if Todd’s getting too tired to hide his natural state of chaos because the slightly more professional attitude he had as Peacekeeper Red is practically gone. Joshua and Dennis are amazing and talented and I really hope they don’t ruin my trust by hurting my boy!

Just… wow. Giannis Milonogiannis is just… wow! I don’t think I’ll ever get tired of the fight scenes he draws, especially not the ones in this issue. I love everything about them, the motion, the impact, the investment we get as readers. It genuinely feels like you are watching it right in front of you like you’re in the room. Then again, I don’t think anyone would want actually be in the same room! Those people are so violent, and you can see it in the faces that Giannis draws so well. There is so much emotion on his character’s faces, and even when you can’t see their expressions, due to them wearing vigilante masks, you can still tell from their body language. You just know when someone’s super angry, or trying to hide away from something.

Forget fighting, teach me dramatics instead

Now for Jorge Jimenez’s backup strip, which is way too good to just be seen as such. Listen, we all know Bruce Wayne’s a playboy and likes causing drama amongst the social elite. What I think a lot of people forget is, these dramatics are used even more as Batman. I loved this short, Father and Son Outing tale, as it delivers exactly the kind of parent/child bonding I want to see.

Damian already knows how to fight, what he doesn’t know is how to strike fear into the very hearts of criminals with just a shadow. Not to worry, Dad’s here to show him the ropes. This has to be my favorite short story from this series to date. I keep saying that, and yet each month it seems to be true. Jorge Jimenez has blown everything else out of the water. As this huge talent was both writer and artist of this amazing, great, funny, well-crafted piece of work definitely means that I’ll be looking for more from him as more than just an artist from now on.

Pure chaos. This took us back to Jason Todd’s roots and his terrible plans. I have no idea how we ended up here, but I really, really cannot wait to see what Williamson and Culver have in store for us next. There’s something so uniquely different about this series and I have no idea where it’s going, or what’s going to happen next, I just hope that Jason finally gets to reconcile with the Batfam. Then there’s the short story at the end… I really need to know the next one because they keep getting better and better each time. I’m hoping this continues and that I love the next one even more!