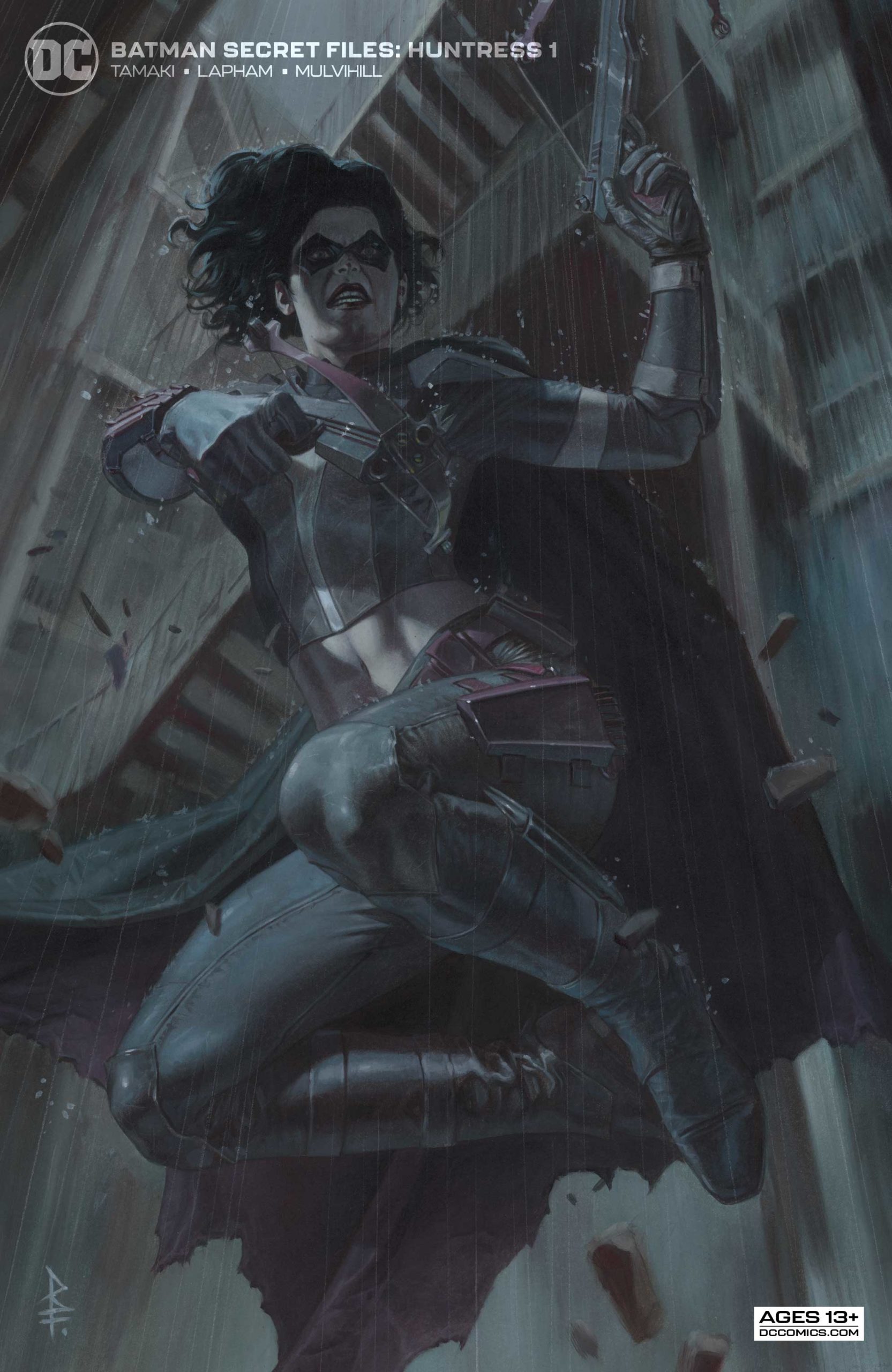 Helena Bertinelli, that name strikes fear and power into the hearts of those who challenge her, and in this latest issue of Batman: Secret Files – Huntress #1, it pays to honor her. I’m excited to be reviewing this great series, which shines a spotlight on the beloved members of the most prestigious and attractive family in DC Comics. In this issue, Huntress battles a venomous villain known as Vile. The art is so captivating and intriguing, the story plays like a horror movie, which means it’s never too late to start celebrating Halloween, dear reader.

The covers are all stunning, and Huntress deserves the spotlight. The strong, dominating poses on each piece of art fits her personality, as well as the fight in her eyes. The shadows and light pull to call a hero who belongs in the darkness. Each cover foreshadows the dark undertones of this issue.

I love the inner workings of Helena’s mind. After she suffers from being infected by Vile, however, the virus has left her with some interesting, not-so-pleasant side effects. I love her reaction: “Typical Superhero-Trauma-aftermath stuff,” trying to brush it off. Honestly, I see why she’s a major member of the Batfam, as this group doesn’t deal with trauma in the most ideal ways. Or maybe vengeance actually is the ideal way to deal with trauma? Helena’s inner-monologue in this story is beautiful; I can see Batman in her, but she also has her own, unique, flamboyant, and iconic personality.

I adore seeing the setting of Gotham and the city’s citizens. Honestly, the people who live there have the most interesting personalities, because… well, darn, Gotham boys and girls just be like that. They’re in the midst of constant chaos and crime, but hey, let’s go watch a movie with the babe.

The gruesome takes on how each citizen affected are really HP Lovecraftian, if you’re a fan of body horror. I also admire Helena’s kill-rule. It might eat her up on the inside, but her line saying, “If I can’t save them… I can at least stop them,” is a lesson other heroes could learn. I love her characterization. Take notes, B-man.

If this continues from other character arcs, there is a lot to swallow. Mariko Tamaki has done wonders in writing Helena in Detective Comics #1035, she’s already lost her dear friend and is in the middle of the case against Bruce Wayne being framed for murder. In this issue though, Batman has saved Helena from Vile, suspecting just in the nick of time. However (spoiler) Batman himself was not able to be saved, and only Helena, blessed (cursed?) with her all-seeing powers of Vile’s next move carries the best chance of saving him.

The art is not as complex as the previous issue, but Batman: Secret Files: Huntress #1 has its own strengths and compelling merit. It certainly gave me a Ghostbusters vibe. The city shots are gorgeous and give a strong feeling of being pulled into Gotham. The place really looks grimy, but filled with life. The Lovecraftian feeling exists strongly in the art, as David Lapham is a wicked horror artist. He really excels are drawing the blood and guts, and is able to instigate discomfort within his work, which is a talent. The oozing eyes and mouths are chilling. He’s an interesting choice for Huntress, as her world is effectively more violent and gruesome than those of other members of the Batfam.

The scenes where Helena perceives Vile’s action is well done, and so are the expressions of horror. The frames are very direct, which I personally enjoyed. The reader’s eyes follow each panel well, and I found this to be a simpler read than some other comics. It wasn’t heavily info-dumping, which I greatly appreciate. The drive-in movie scenes are my favorites, art-wise, and I love the clowns on screen. That city can never be rid of clowns, it seems. Lapham really show how little Gotham’s citizens mind their city’s personality.

The colors are very Gotham-esque, that grimy city-look, and they also fit Helena’s superhero role. While in the previous issue, we were dealing with the Signal who is gifted with the power of light, and handles the crime during the day, the city rapidly changes personality at night. Gotham might as well have a personality disorder, as she’s absolutely, beautifully mad. The colors follow through from the harbor scene, to the drive-through moment, right up to Helena’s heroic end scene. The chaotic green tint through the issue highlights the grotesque villain.

If you’re a fan of Helena, and I love this bad babe, then Batman: Secret Files: Huntress #1 is a compelling book to read. I adore Batman’s butt getting saved by his family as well, because that chaotic good needs all the help he can get. In addition, if you’re a fan of a little horror, which I indeed am, it’s a disturbingly fun issue. The art really captures you with how Vile’s infection is depicted, and Lapham’s body horror is “chef’s kiss”.

It’s great seeing the hero care so much for the citizens as well; although Helena does some major damage, she wants to help, she wants to do good, regardless of the mud she has to wade through.

Pick up this issue if you’re interested in virus-themed stories, Huntress, the Secret Files series (which contains Batfam arcs that I adore) and of course, and an arc where the Bat is in trouble again.