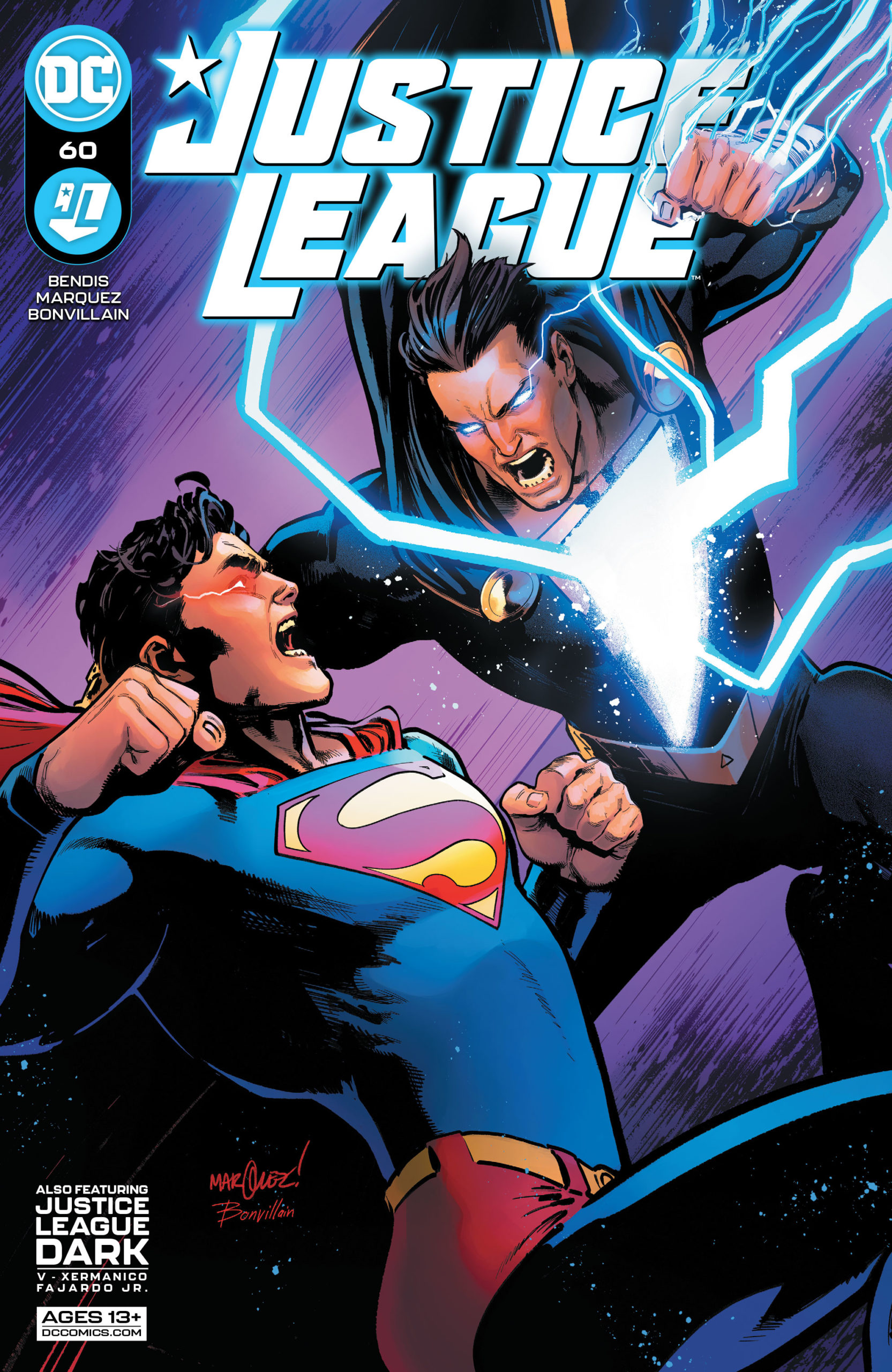 The League discovers an interdimensional threat, as Naomi joins the team in this week’s Justice League #60.

After an interdimensional monster appeared last issue, the League, along with Black Adam, discover a similar energy signal. This leads them to Naomi: a young girl with superpowers, who’s from the same dimension as the monster. Upon learning of an imminent invasion from this other dimension, the League set a plan into motion to stop these creatures before any more arrive on Earth.

Strangely enough, there’s really only one “action” sequence in Justice League #60, and it lasts all of two pages. However, despite the issue’s lack of fist-throwing, the issue never lags. In fact, this comic is proof that Bendis has a very strong grasp of each of these characters.

As the team hashes out their differences, as they’re also problem-solving, Bendis manages to write a witty, humorous script, that showcases his cast and their team dynamics. There’s a particularly wonderful exchange between Superman (the idealist) and Green Arrow (the cynic) over Black Adam’s role within the team. I found it fun watching the two squabble, as other members of the time jumped in to take sides. Drawing on 80 years worth of history, it’s apparent that Bendis is trying to re-establish a similar team dynamic that was indicative of the Silver and Bronze Ages. 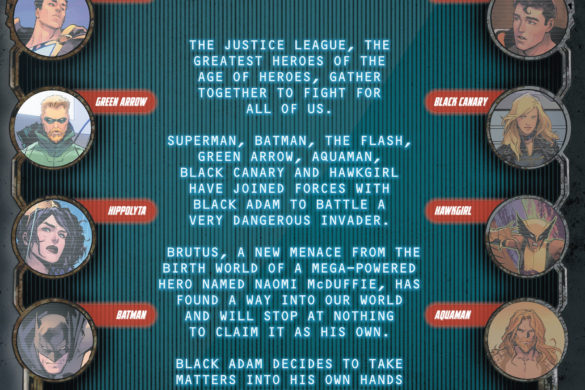 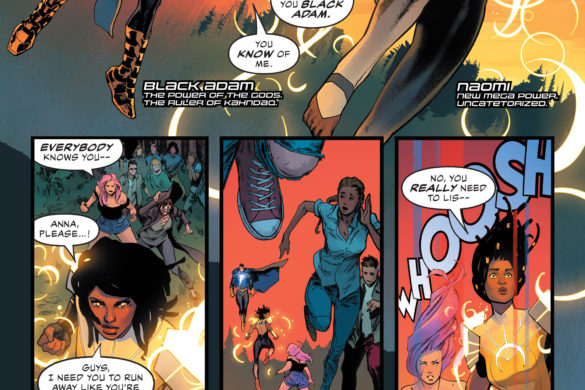 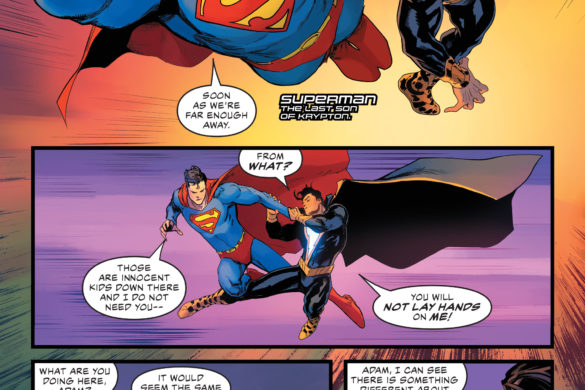 David Marquez and Tamra Bonvillain once again knock it out of the park. Marquez’s work is unsurprisingly beautiful, as he renders each of these characters in his signature sleek, idealized style. While the line-art’s a wonder to behold, Bonvillain’s colors really make the issue pop. Wrapped in lush purples and vibrant reds, Bonvillain’s work adds both depth and beauty to an already stunning issue.

One of the highlights of the issue’s art is the paneling, as Marquez really leans into some unique style choices with the panels, particularly in his action sequences. Since there’s only really one, very short slugfest in this issue, Marquez channels his capacity for creative layouts in another sequence towards the end of the issue. I don’t want to spoil the ending, so I can’t reveal too much, so all I’ll say that this example is on a transition page that features a high-energy travel sequence that’s captured in various small, diagonally oriented panels. This scene is the build to the issue’s wonderful cliffhanger, and was masterfully executed by the entire creative team. 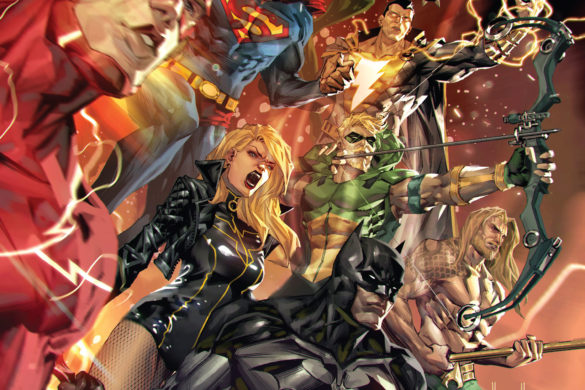 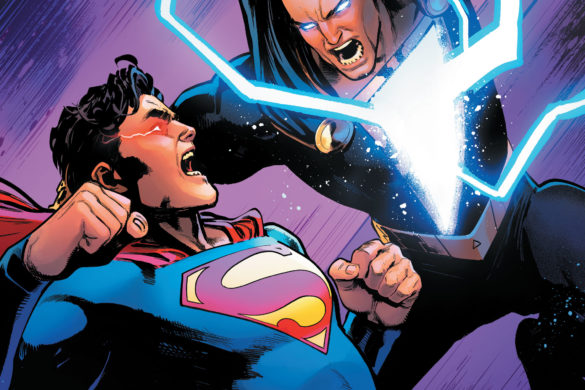 Ram V’s story is interesting, and his script is great. However, it really feels too short. Ram was given a mere nine pages to tell his story (ten if you count the two-page spread as two pages), and as his page budget was so small, Ram V’s story felt to me like it was moving at a snail’s pace. Please don’t get me wrong: I am very much invested in the story he’s telling, but as this tale progresses, it’s painfully obvious that the Justice League Dark really needs its own title again. Ram V doesn’t have the necessary page count for a story this complex… but, hey – at least Xermanico’s art is still stunning.

Justice League #60 is a great follow-up to last month’s debut. Bendis and Marquez have proven to be a power-house team, producing an excellent Justice League story that pays homage to the past, while embracing the future. Despite Ram V and Xermanico’s stingy page count, they’re economic in their storytelling, which almost makes the backup satisfying. Overall, this issue is a great read.

Final Verdict: If you liked last month’s outing, this one won’t disappoint.

How did Dave Bautista’s Pitch to Play Bane Go?