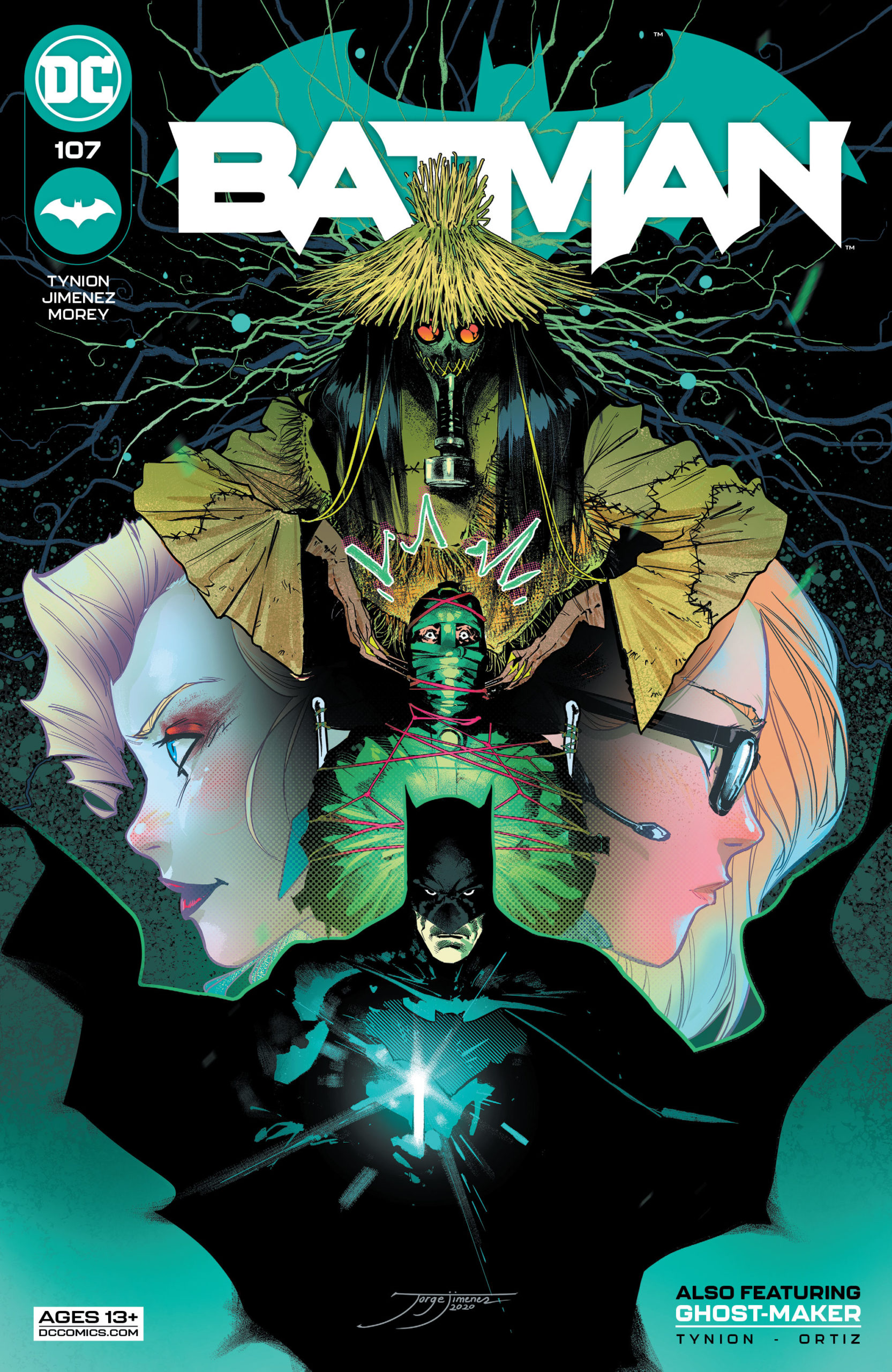 Batman #107 continues the Dark Knight’s journey towards the Scarecrow’s diabolical endgame. Showing us where Batman ends up before shooting back in time, to fill in the narrative gaps, is a clever choice from Tynion, as it helps to add a sense of foreboding to the proceedings. No matter what choice Batman makes, we as readers know that ultimately all roads lead to pain and suffering. Personally speaking this frames my enjoyment of the issue with a great sense of anticipation and eagerness to find out how events take such a turn for the worse.

Speaking of The Scarecrow, has he ever looked more macabre and gruesome then this current iteration? Jorge Jimenez has created a version of Jonathan Crane that’s far removed from the Wizard of Oz style versions of yesteryear. Genuinely terrifying, this is certainly not anybody’s idea of the good doctor. As a depiction of a character that uses fear as the main part of his arsenal, this is spot on! A demented hybrid of Raiden from Mortal Kombat and a Plague doctor from the days of the Bubonic plague, this is heady stuff that will linger long in the memory. One shudders just at the thought of him.

There’s a labyrinthine plot slowly being unveiled in Batman #107, and Tynion is pacing it very nicely indeed. As befits a villain with a cerebrally oriented skillset, rather than one that is adept with his fists, Crane is playing the long game here. This is truly a plan with a lot of moving parts, all being positioned on the board by a master craftsman. No spoilers here, but when different Gotham luminaries such as Mayor Nakano, Simon Saint, and a returning Renee Montoya are being added to the mix, the melting pot is about to boil over. Crane is every bit Bruce’s intellectual equal, perhaps even his superior in some ways, so this battle of wits could be one he can’t win, alone.

Of course, a certain Harley Quinn is still hanging around the periphery of the narrative, still working on the side of the angels. An interesting alliance with Bruce’s long lost BFF, Ghost-Maker, is teased here and I think that there could be some mileage in those two forming a team. The embodiment of the odd couple, their adventures together could be extremely entertaining, with a nice mix of humour and pathos to be potentially mined. The ultimate stick in the mud with the ultimate nutter, give it a shot DC Comics!

Speaking of Ghost-Maker, the bonus tale at the end of this issue is a story dedicated to him, seemingly set before the current timeline. This is a very welcome development, as it helps to flesh out his back story beyond what we have seen so far, putting more meat on the bone for the character and ultimately creating a story that is almost Bond-ian in both scope, and in tongue-in-cheek humour. Whilst only a few pages long, it’s certainly entertaining, and I look forward to seeing where it goes next.

Batman #107 is an enjoyable read. Whilst the pace is fairly sedate, the plot is involved enough to demand one’s attention. With some tough times in the pipeline for Batman, the markers are laid down here. Hopefully the next couple of issues see them bear fruit. With a certain Mr Malone appearing at the issue’s denouement, undercover fun beckons in #108!