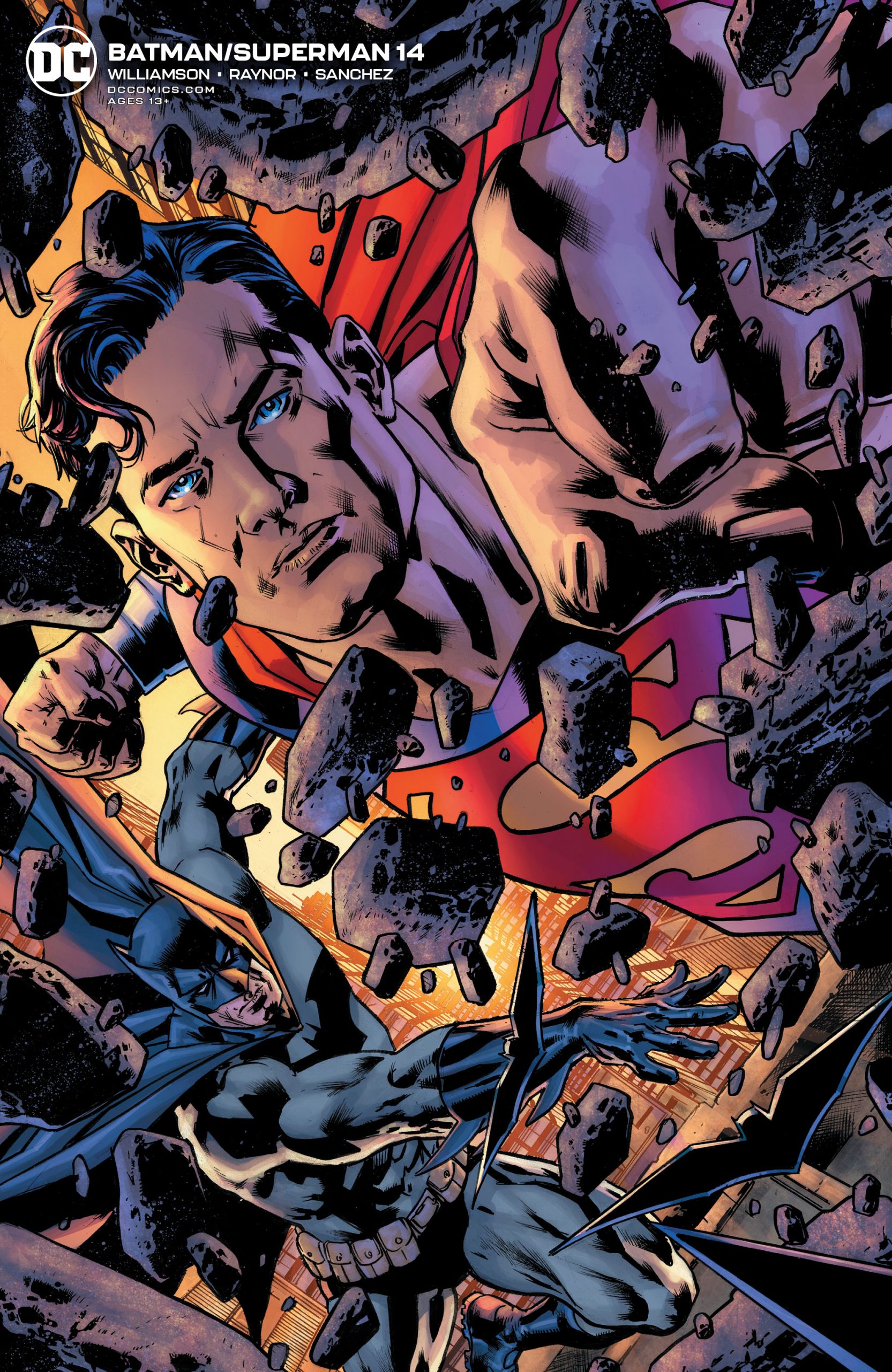 Batman dives into the Matrix while Superman battles a massive android, as Williamson wraps up “Planet Brainiac” in this week’s Batman/Superman #14.

Trapped on the moon battling a mutation of Brainiac that’s infected the Batcomputer, Superman and Batman finally receive their unwanted backup. Steel and Batwoman join the fray, giving Superman just enough time to fly back to Earth.

Williamson does a great job wrapping up this three parter. One of the hallmarks of Williamson’s tenure on Batman/Superman is his inclination towards shorter arcs. With the exception of the first story in this series (“Infected”), each of Williamson’s stories has been either two or three issues long. This is very much reminiscent of the early Rebirth stories, which leaned towards tighter, shorter tales. 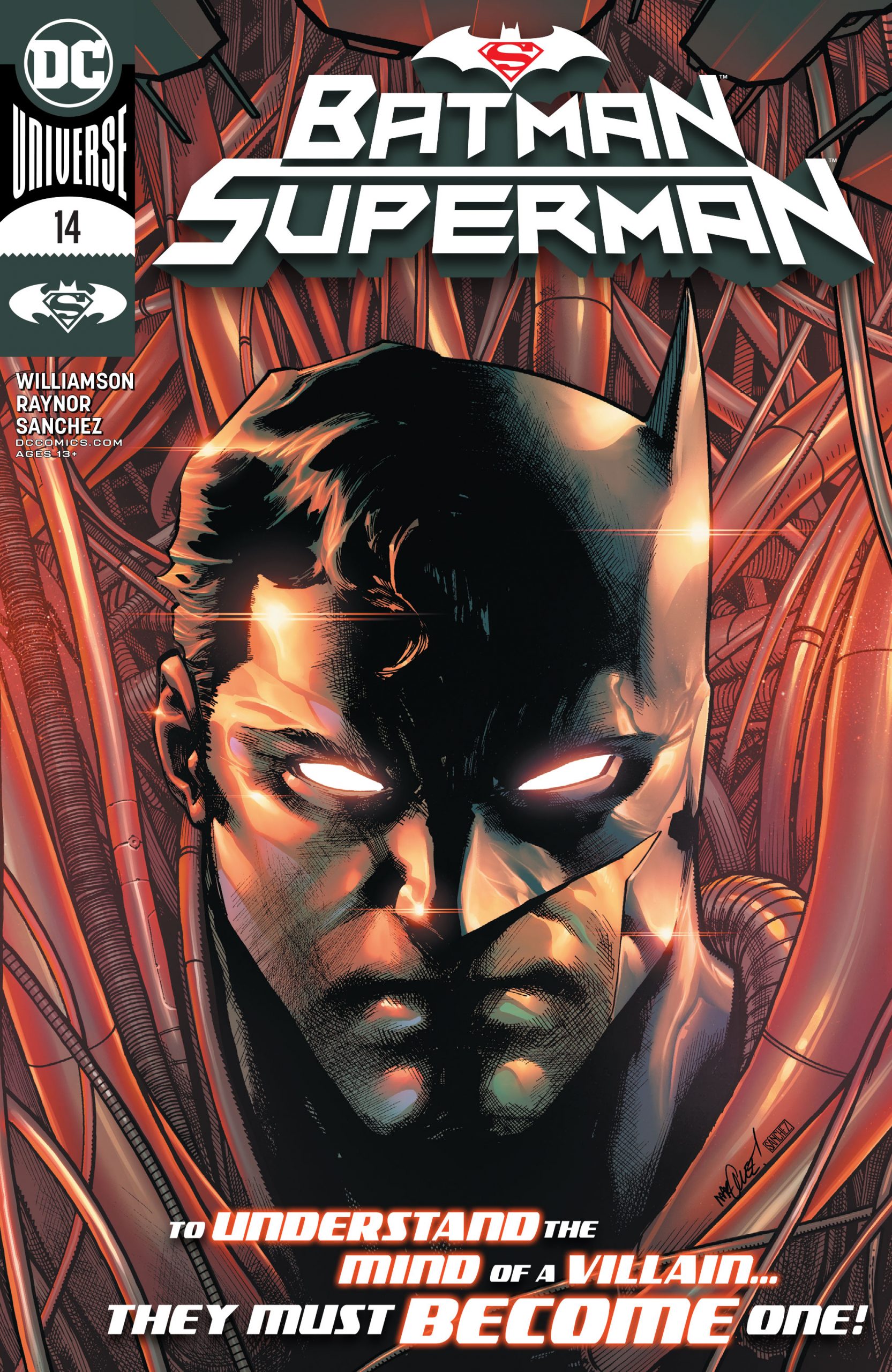 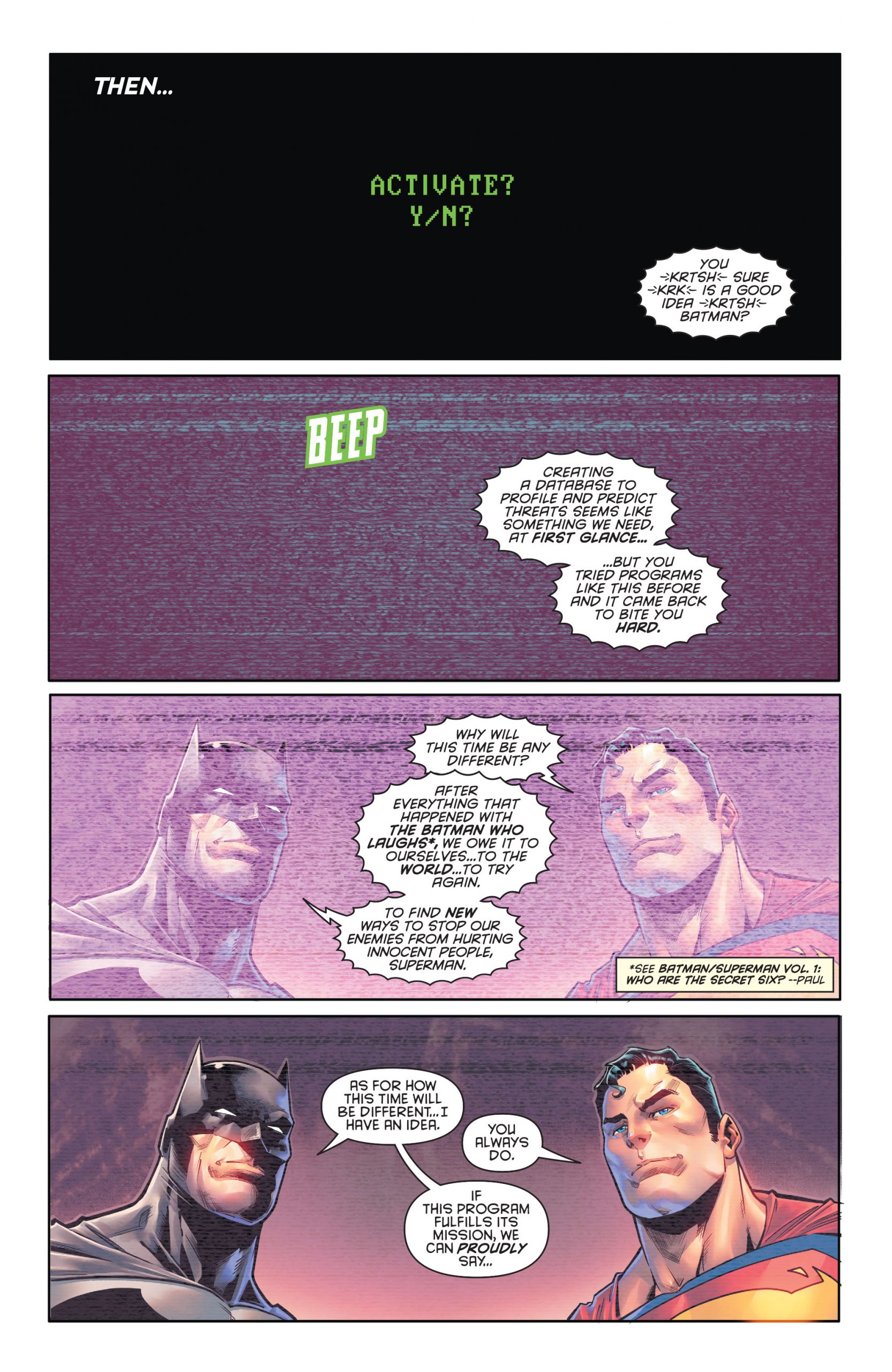 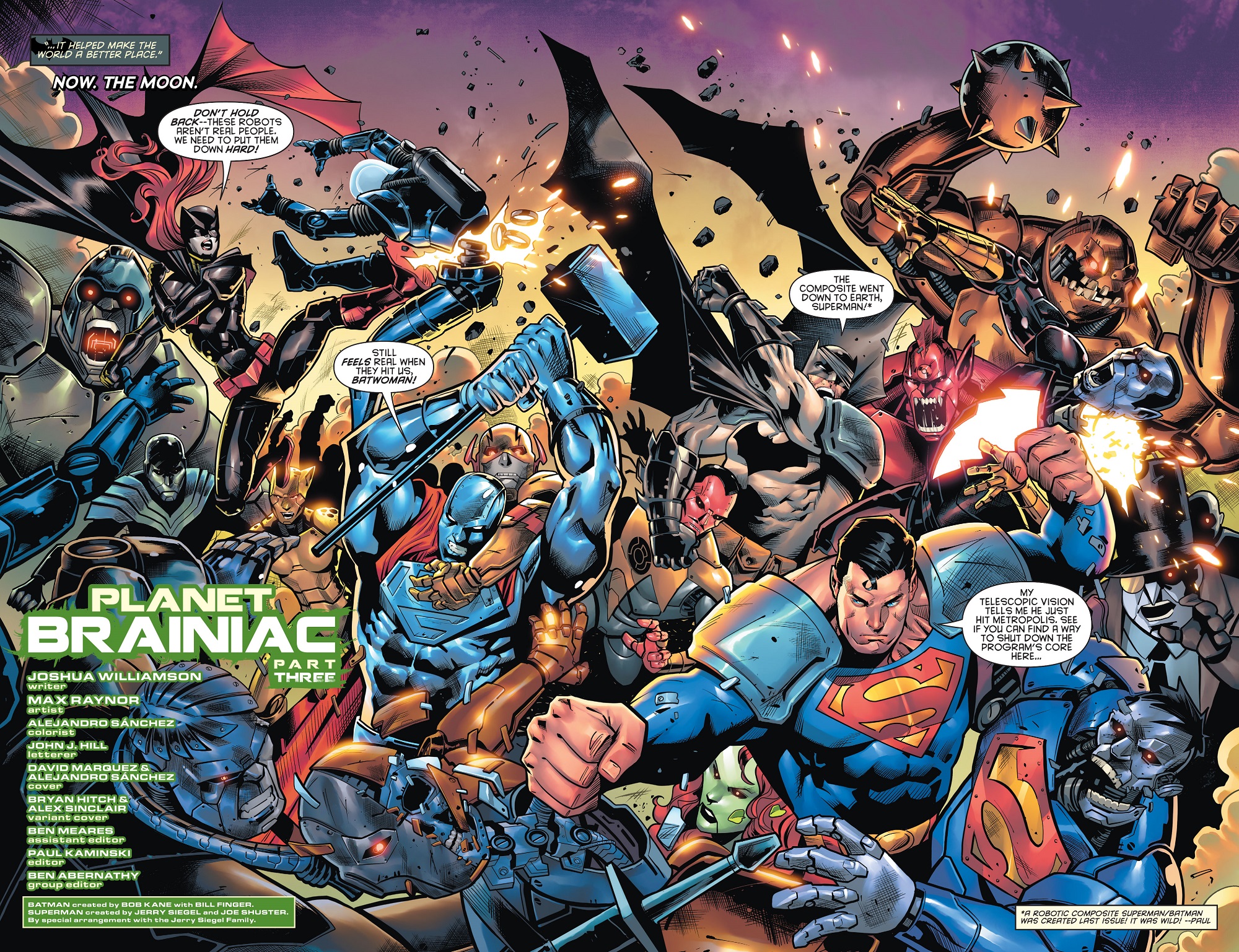 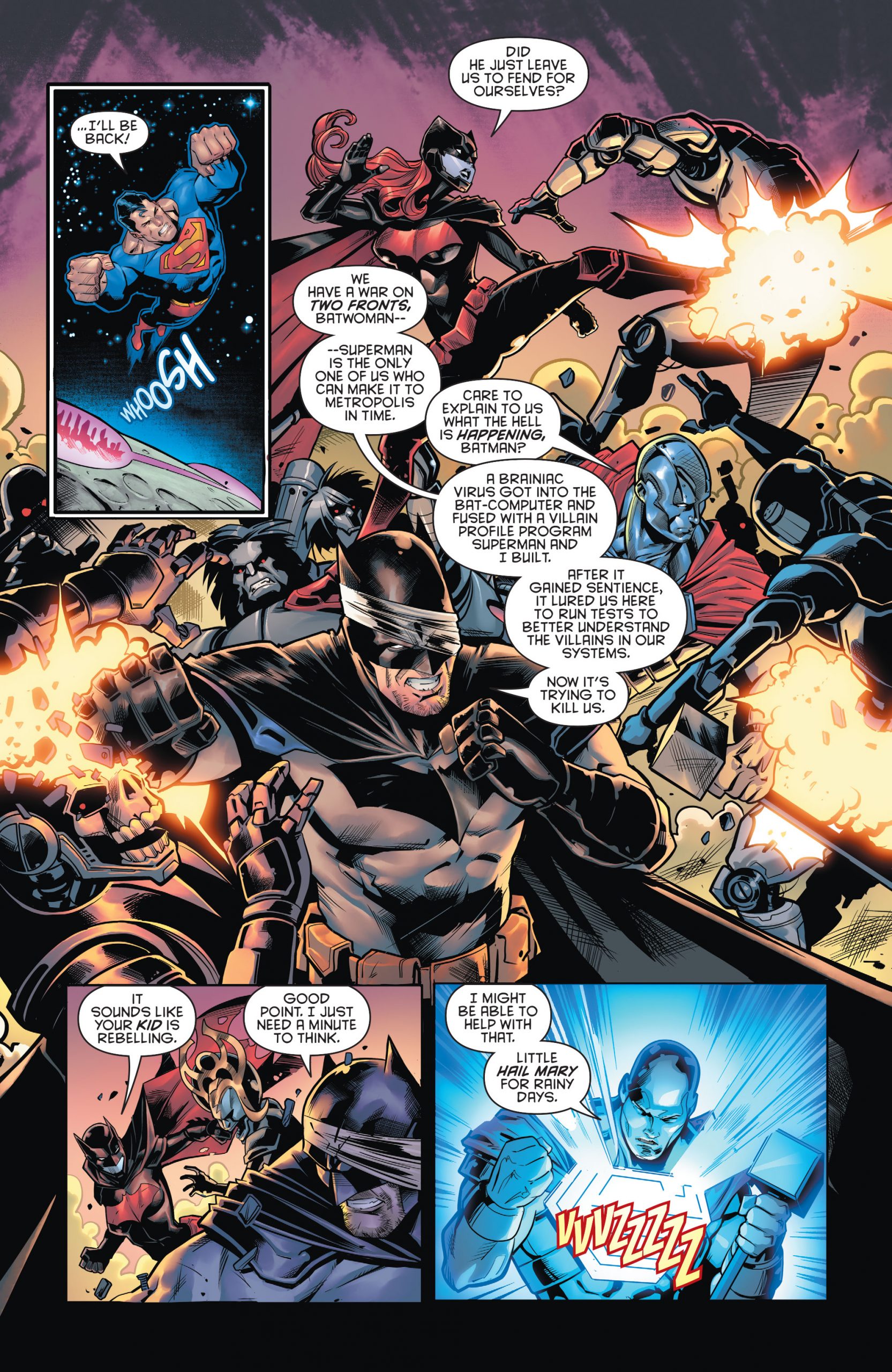 Personally, I find this to be one of Williamson’s strengths as a writer – compact, succinct storytelling. Rebirth notwithstanding, the current trend in comics leans towards decompressed storytelling (I’m looking at you, Scott Snyder). While this isn’t necessarily a bad thing (i.e. Scott Snyder), waiting six to twelve months to finish a story is a heavy lift at times. Williamson compresses his stories into much more manageable lengths. In short, he’s great at wrapping things up.

One of the more challenging parts of writing comic book reviews is trying not to repeat yourself. Unfortunately, this is one of those cases where I’m pretty much going to say again the same thing that I’ve said for the past two months: Max Raynor’s work on this title is stunning. I could wax lyrical about how his linework is delightfully detailed, or how his paneling layouts are pitch-perfectly paced, or how aesthetically brilliant the digital sequences are… but you’ve heard it all before. Raynor’s an incredibly talented artist, and I’m ecstatic that he’s been tapped for the Super Sons revival.

Batman/Superman #14 is another fantastic issue, in a fantastic series. Williamson’s script is poignant and fun. Raynor’s art is nothing short of stunning. Next month’s issue #15 will be the last before the two-month Future State event, which will temporarily put this, and many other titles on hiatus. DC hasn’t announced whether or not this series will be returning, so  I really hope it’s not the end.