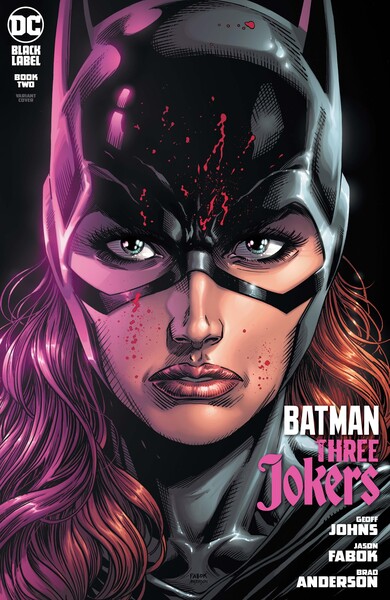 The Joker is dead… Long live the Joker(s). Confused? then pick up Batman: Three Jokers #2 (and read issue #1 as well).

Last month we met The Criminal, The Comedian, and The Clown; the three aspects of the Joker we’ve loved to hate over the last eight decades. Suffice it to say that the repercussions of Jason Todd’s actions were completely mind-blowing (quite literally in the case of the Clown). This month we see Barbara (Batgirl) Gordon delivering the news of the villain’s demise to Batman. The Dark Knight’s reaction is… surprising.

At the end of my last review I was left with questions, not the least of which was, just when is this story set? Alfred’s alive, our three heroes’ attire does not match what they’re currently wearing in their own books, and we first learned about the multiple maniacs of mirth a number of years ago. As this is a DC Black Label book, many fans were thinking that this story is a standalone/Elseworlds type tale, but in recent weeks, author Geoff Johns, has gone on the record to state that this isn’t actually the case.

I’ve never really told a Batman story. I’ve done Batman: Earth One, but that’s a different, younger low-tech version. This was the first time I had a chance to write a real Batman story, in continuity, with The Joker. There’s so many amazing stories out there about The Joker, and I didn’t want to tell another one unless we had a different story, and explored something new. 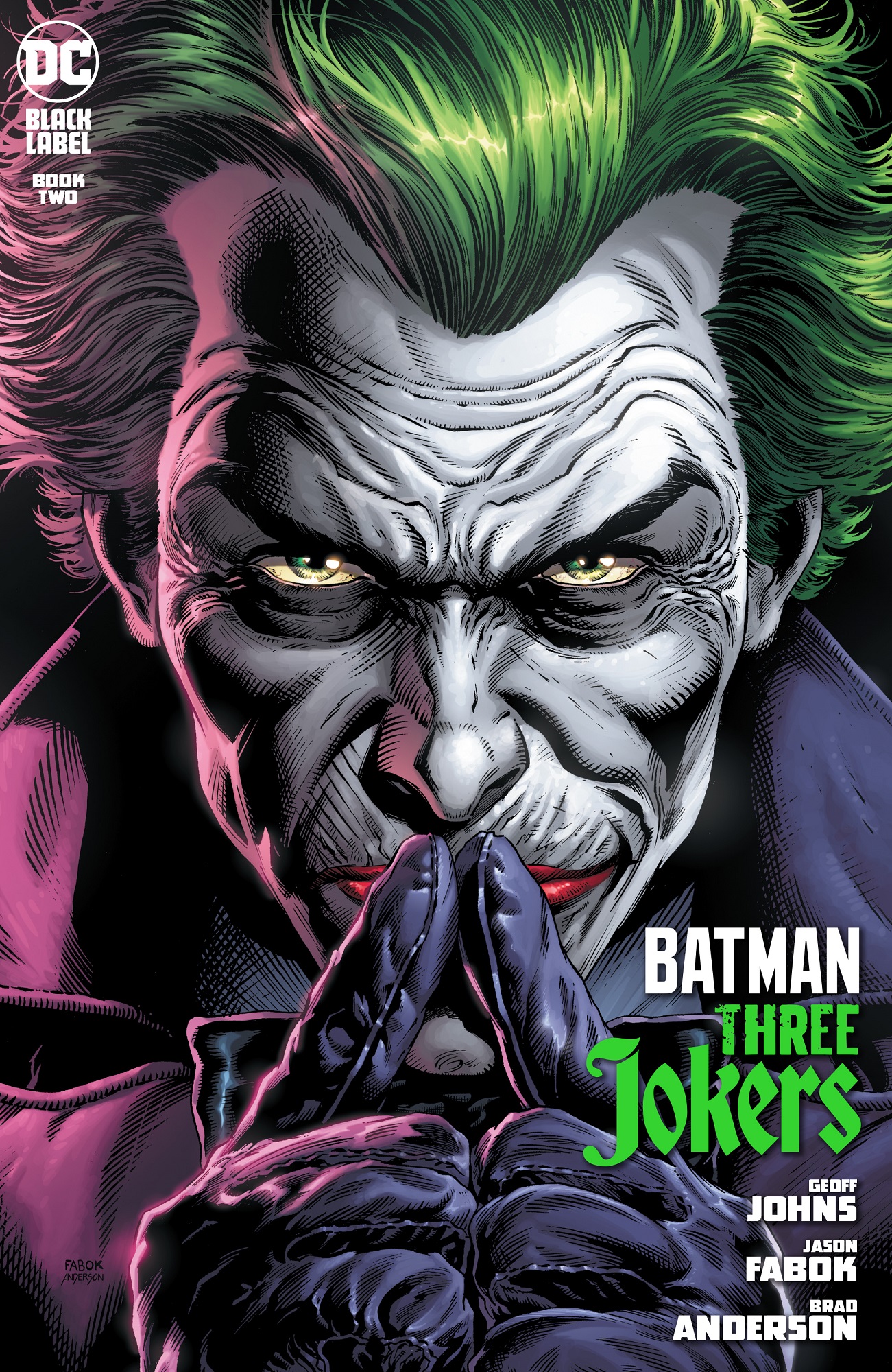 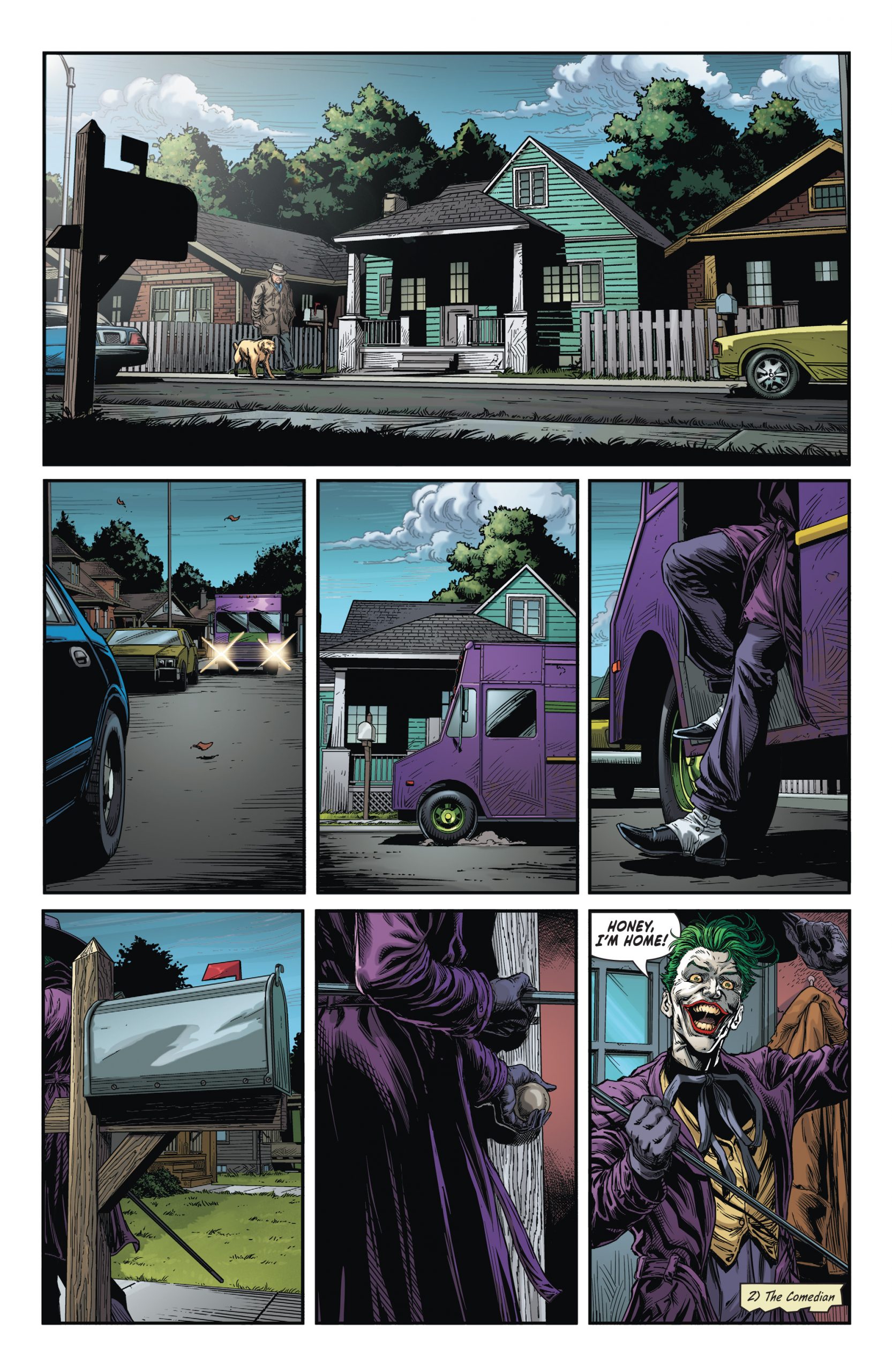 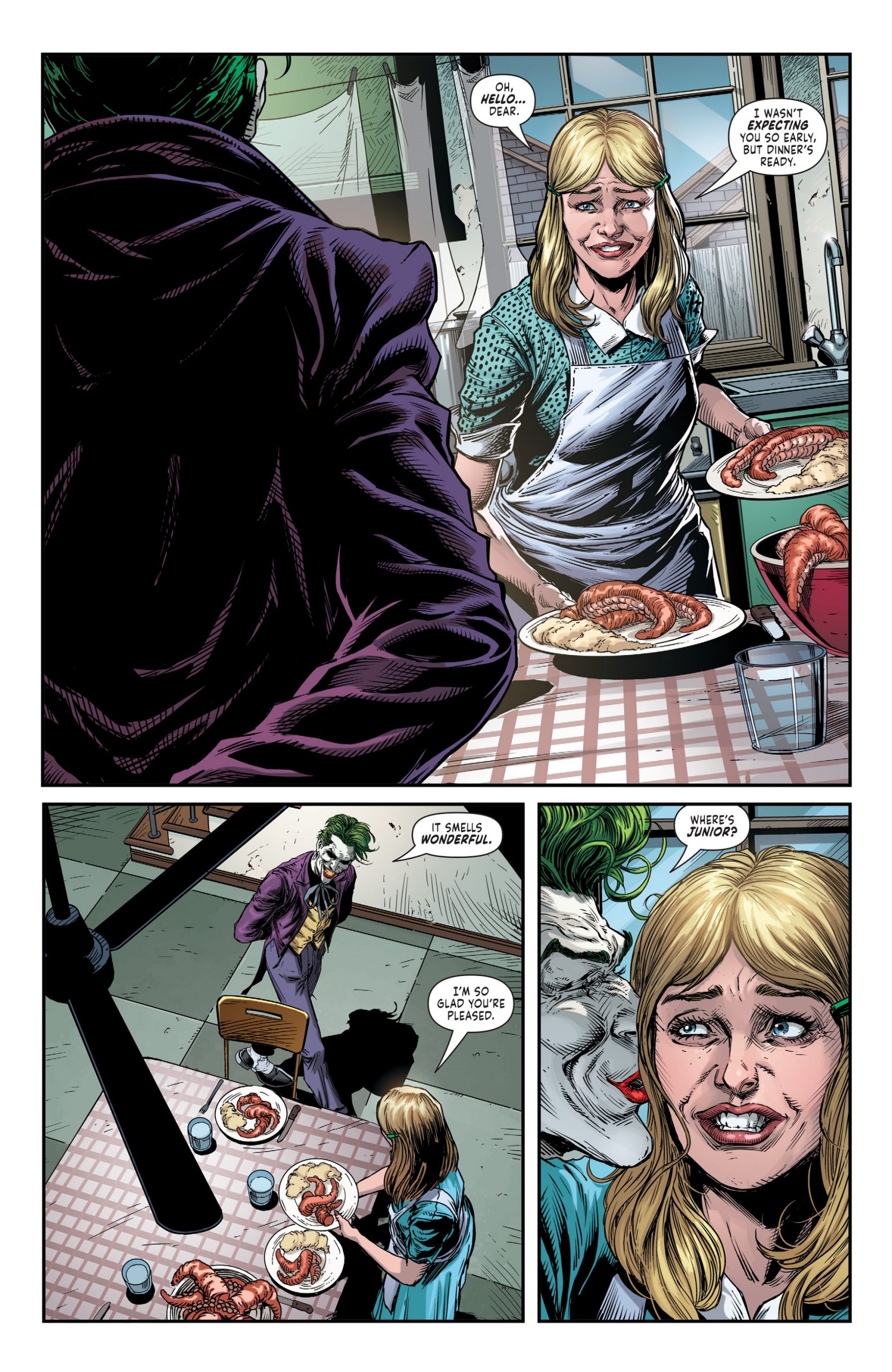 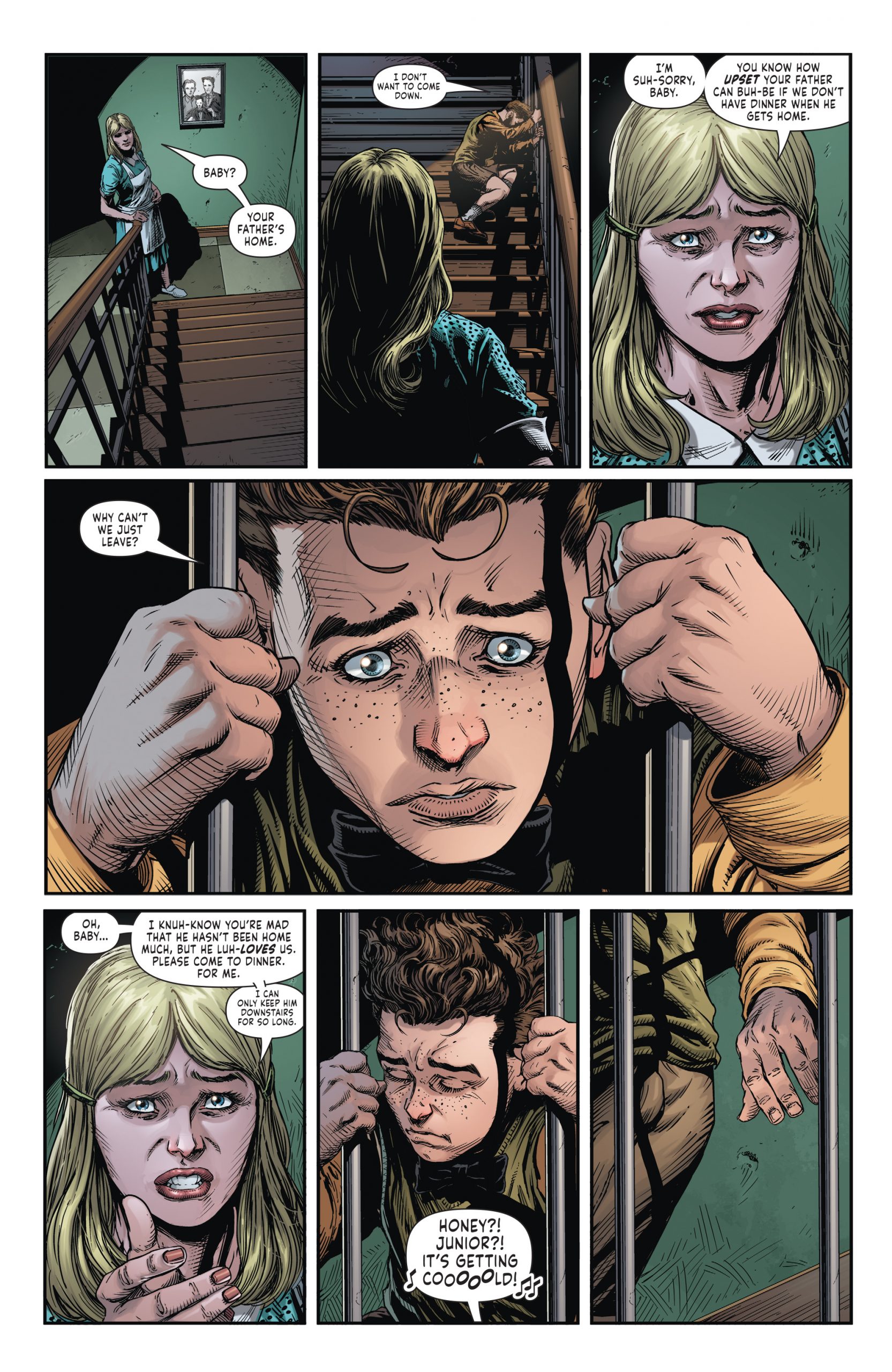 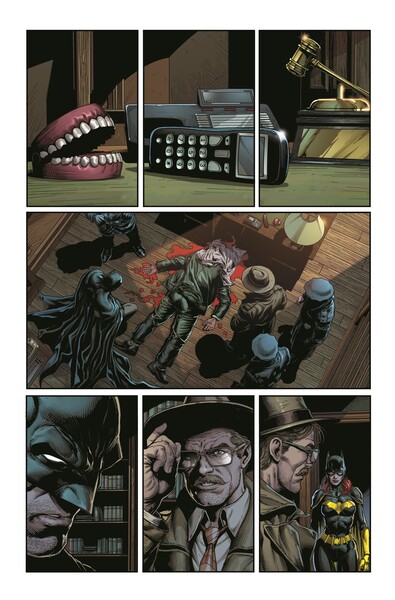 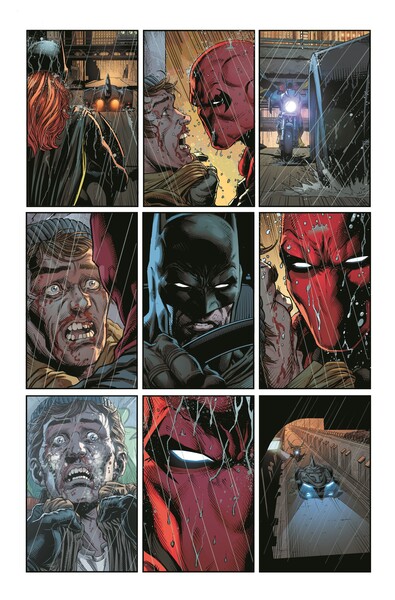 The key phrase here is “in continuity”. This leads me to believe that is a tale set in a post-Death Metal DC Universe, not just because of Alfred and the costumes, but due to the appearance in this story of a very important figure from Batman’s past, who was dead in (most) previous DC eras.

Even though the origin has been changed, and will (hopefully) never settle, since 1951 it’s been known that Joker was the original Red Hood. I never want the “real” origin to be uncovered, I prefer it to be “multiple choice”. The Clown Prince (Princes?)’ view of the mantle being a rite of passage has extremely interesting effects on Jason Todd, both physically… and psychologically in this issue. Once again, it gave me a completely new perspective on Jason’s alter ego.

While the timeline may be a little confusing, one thing I have doubts no about at all is how gorgeous to look at this book is. Jason Fabok, Brad Anderson, and Rob Leigh are producing work so stellar as to call it classic, even though this is a tale still in progress. Geoff Johns is writing a wonderful, dark, scary tale, and his collaborators are bringing his script to life in ways that even he probably couldn’t even have imagined.

Look at the faces on Joker’s wife and son, the terror we see in the eyes of Jason Todd’s victims, and, later in the book, the way Batman reacts when approaching the cell of a Chilling figure from his past. Batman: Three Jokers #2 has made me stand up and pay attention… and I know I’m not alone.

We’re not just getting a great Batman story; the expert way that Batgirl, Red-Hood, and the Joker(s) are being handled in this book, while completely innovative, only goes to further highlight why these characters have remained so powerful, and so well loved, for so long. Batman and his arch-nemesis have been thrilling us with their rivalry for eight decades. Barbara Gordon’s been around for over six, and even Jason Todd has been a comics staple for close to forty years.

This comic not only made me look at Red Hood in a whole new way, it delivered an emotionally fragile Batman, and the most wonderful exchange between Bruce and Barbara I believe I’ve ever read.

I can honestly tell readers to believe the hype. Buy this comic.