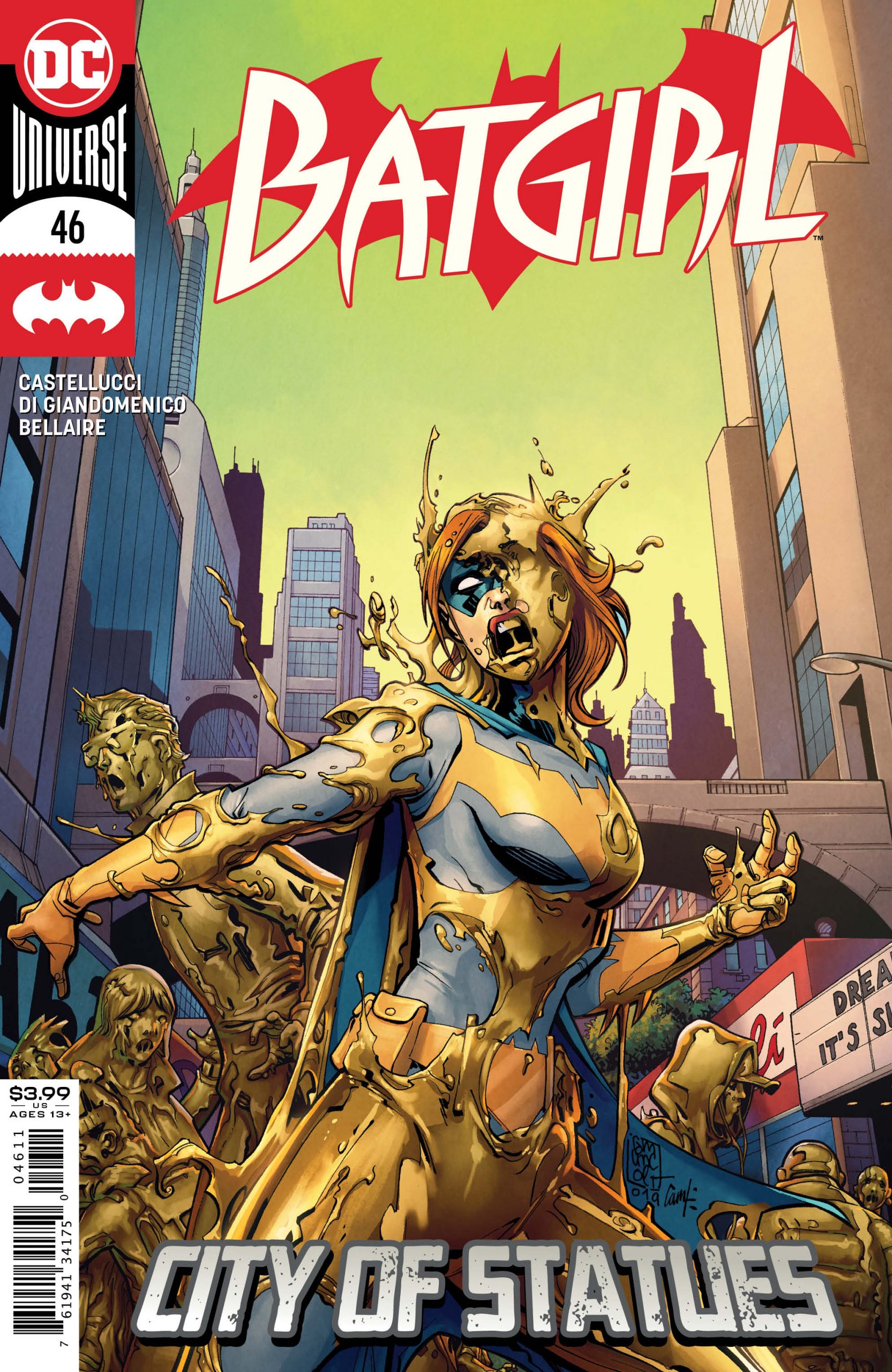 Hello? Sorry, Batgirl can’t come to the phone right now, she’s been a bit tied up. Dasha wasn’t playing games the last time we saw her, and she really thinks that gold’s a girls best friend. Batwoman was out for the count when we last left our two heroines, so… going head to head in a battle of wills, who will get the gold in Batgirl #46?

Gold! Always Believe in Your Soul!

Cecil Castellucci is on another level. If writing was ranked by medals, I’d give her a gold. I like to think I understand the character of Batgirl pretty well, and can anticipate where I think the story’s going, but I don’t think I’ve ever been right since Castellucci took charge. This is amazing thing to think about, she’s never once been predictable, which is why I love coming back. Batgirl #46 has you wondering if Batgirl can get herself and Batwoman out of this trouble, or not.

There are some strong moral questions Barbara Gordon has to figure out in this issue. Dasha’s really putting Batgirl through her paces. Having less of an inner monologue than normal really impacted the amount of conversation we got. Dasha herself got a great villain’s monologue going though, truly explaining herself and what she was doing with the living Gold. Castellucci wrote it brilliantly, hitting all the main points it needed to flesh out the character, and make her backstory more interesting. 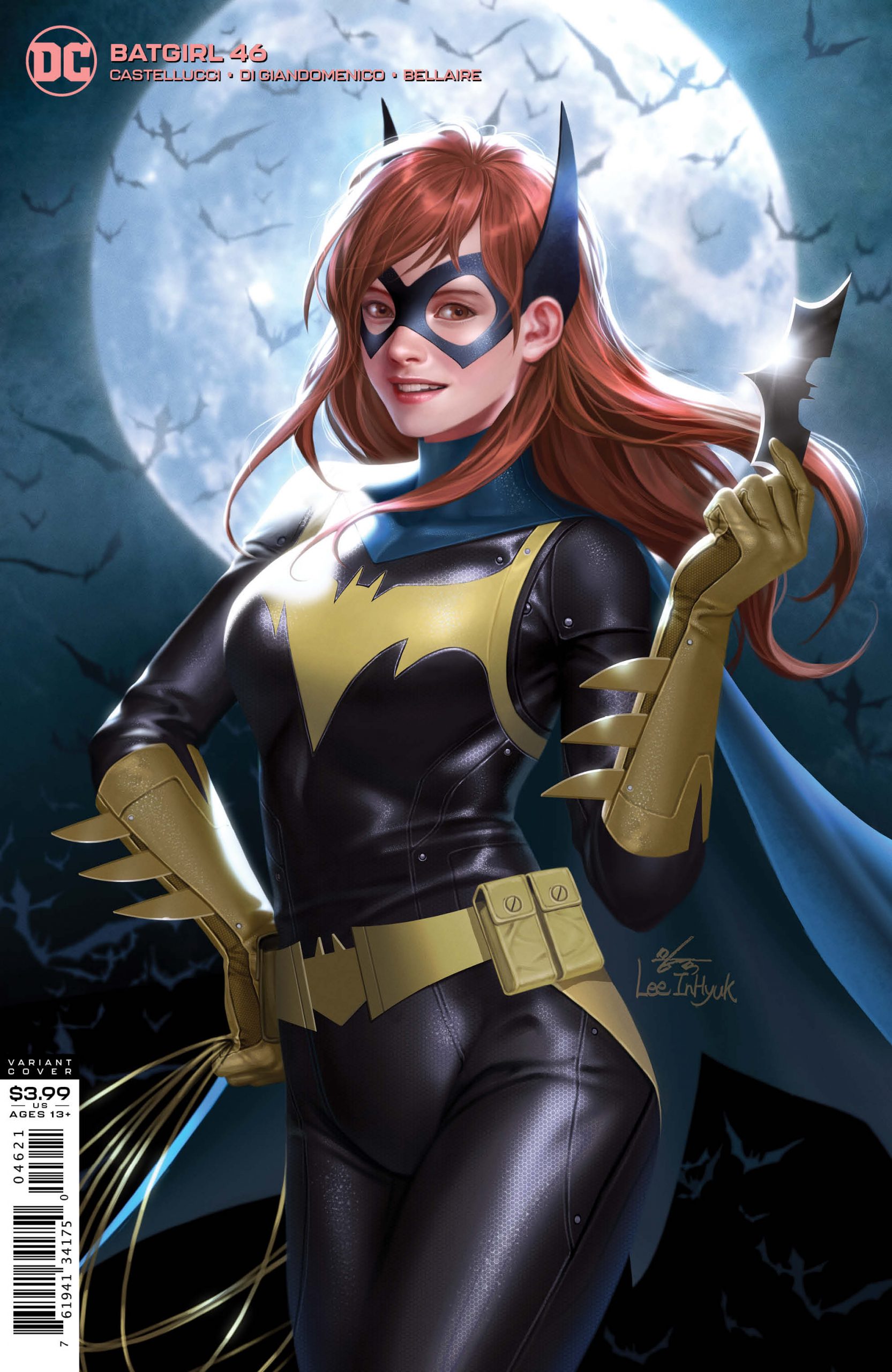 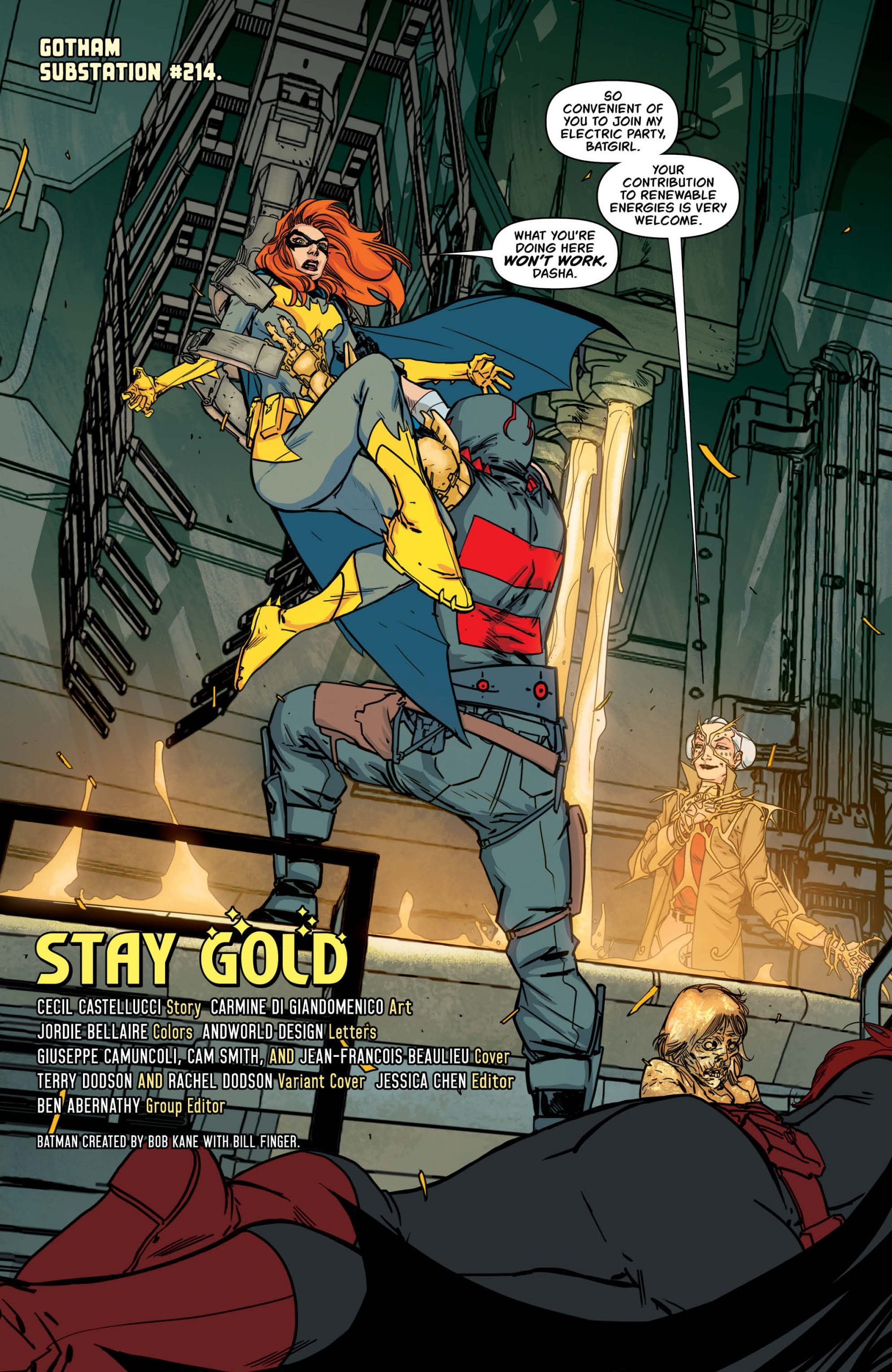 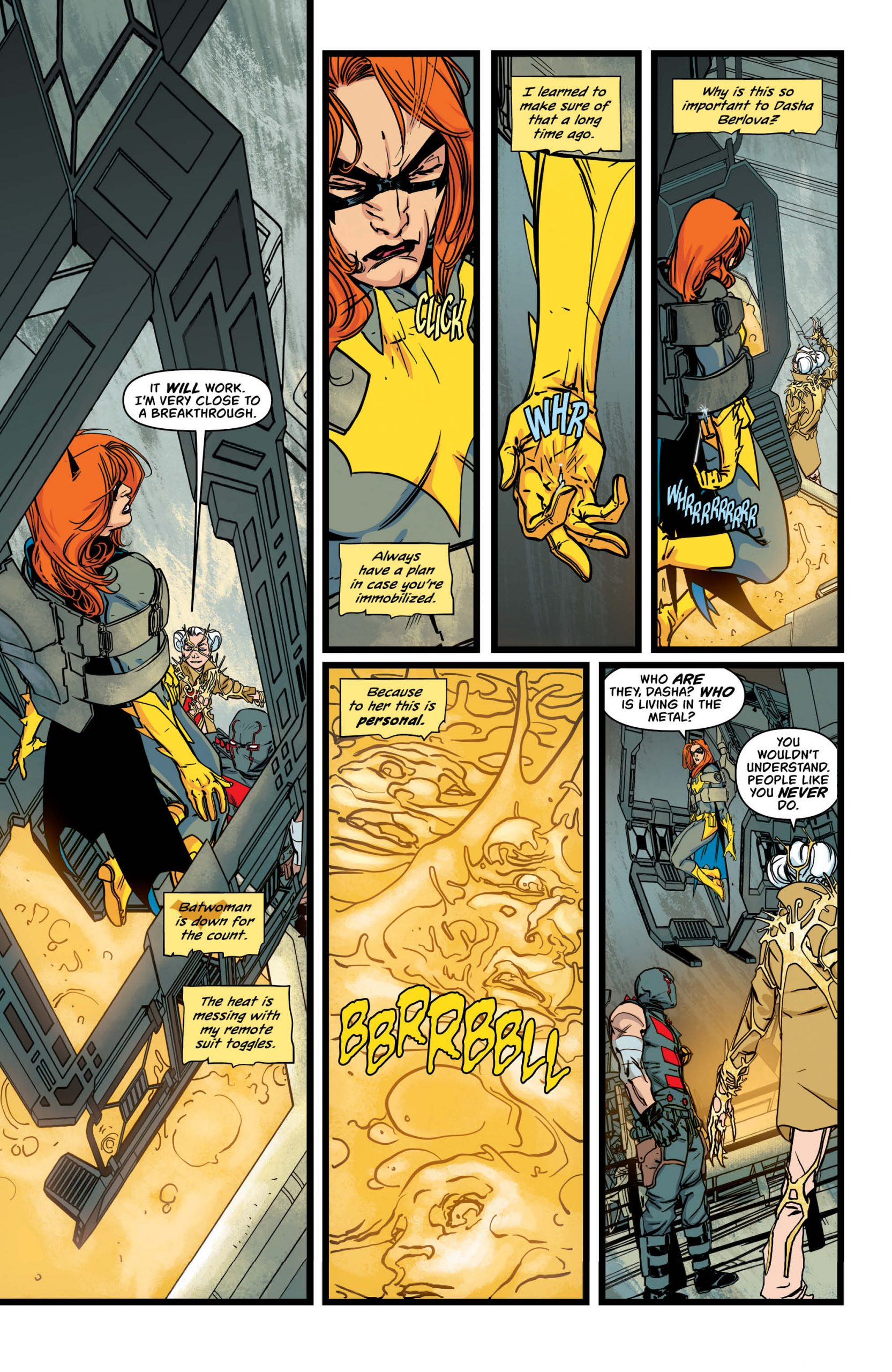 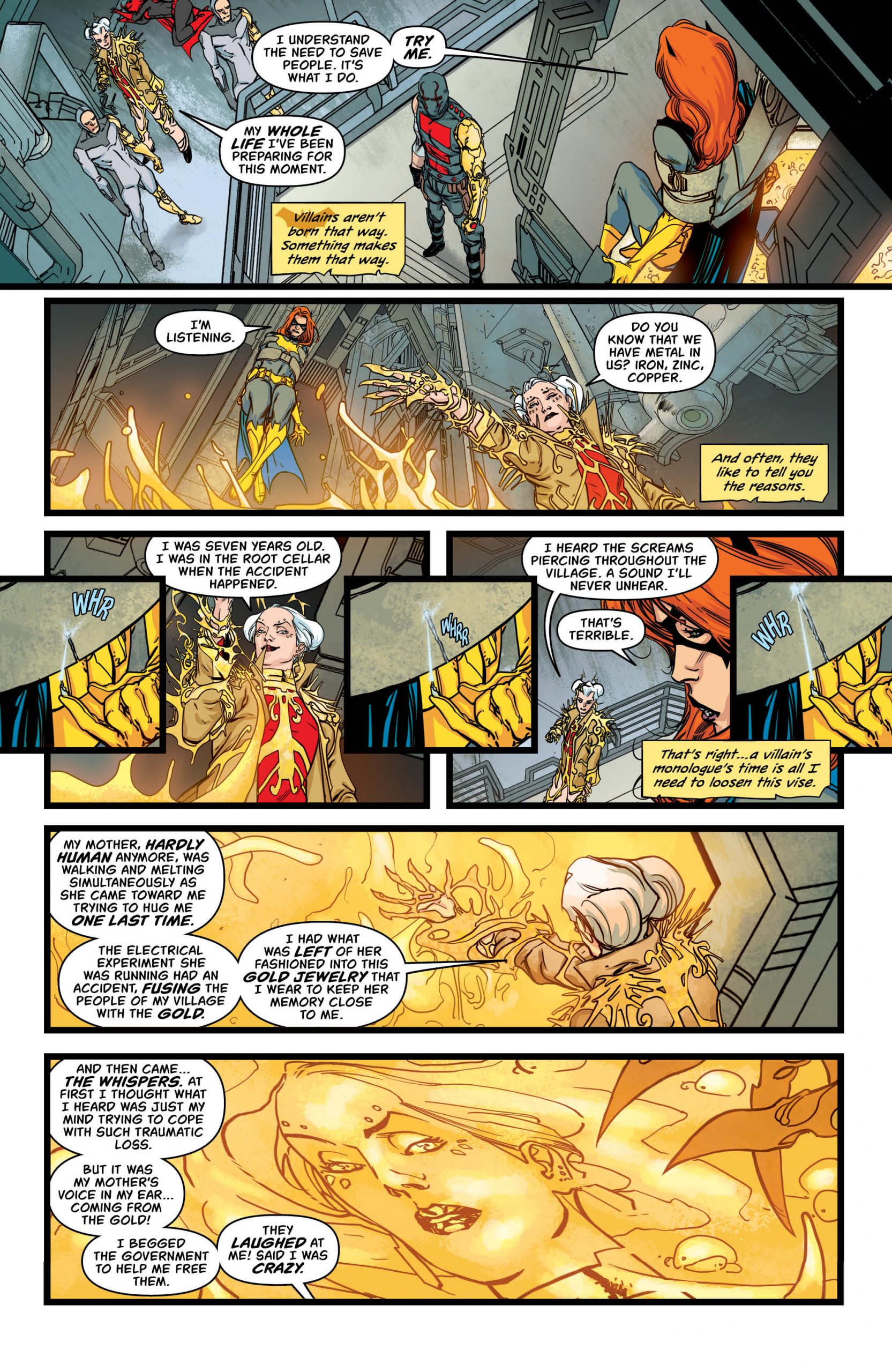 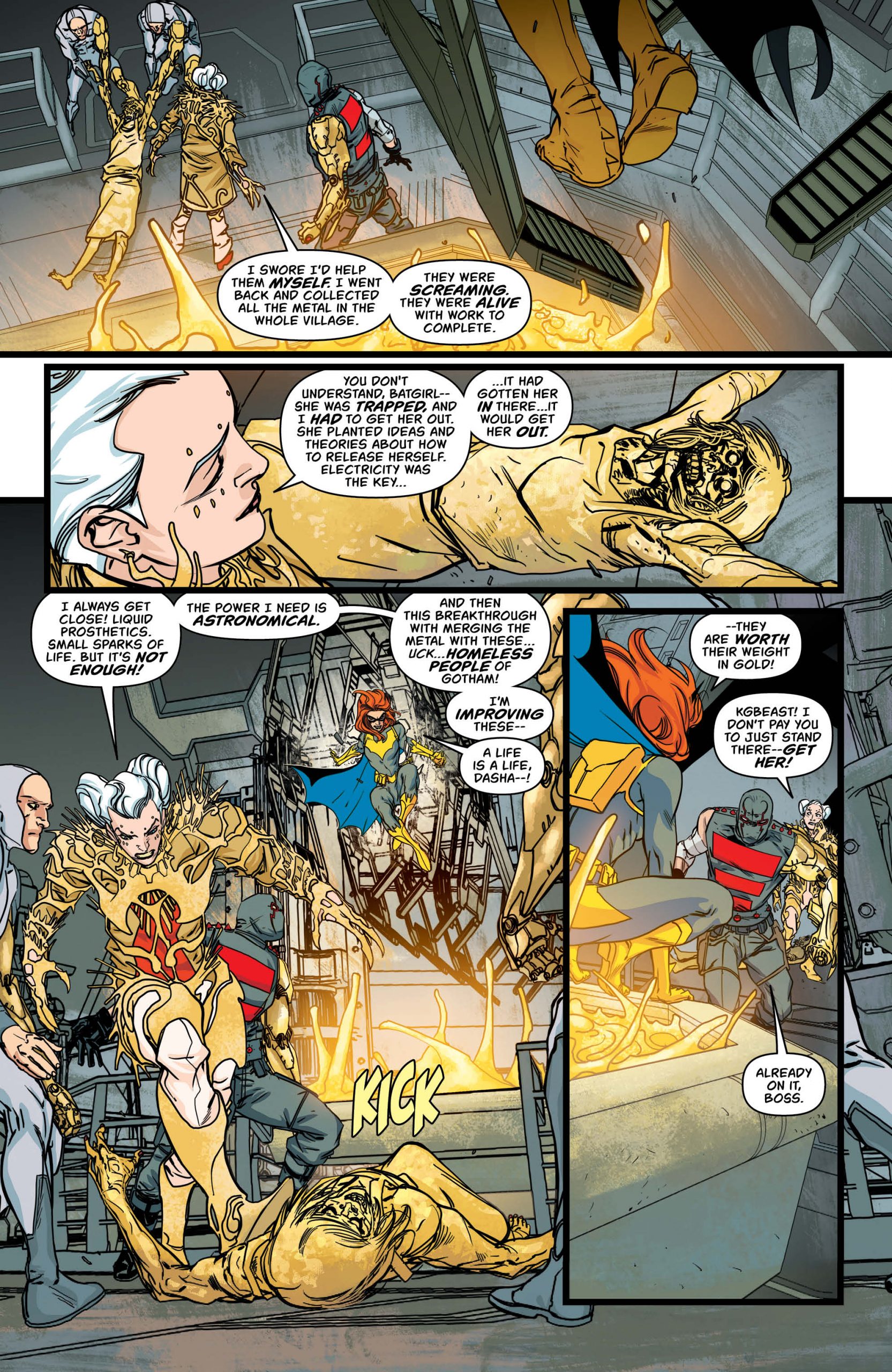 Having such an interesting subject as living Gold, really does let the artist’s imagination run wild. Carmine Di Giandomenico does a great job of bringing it to life (I hope you see what I did there). Not only does Di Giandomenico do the Gold justice, but he pays attention to all the small details, and the large background images. There’s so much to look at in Batgirl #46, that I was overwhelmed a few times by the sheer amount of work and effort put into everything. You can really see it in this issue, due to the very industrial backgrounds, that involve a lot of detail to make them seem realistic.

We can’t praise the art in this issue without saying a few works about Jordie Bellaire, colorist extraordinaire. Di Giandomenico might be able to draw the living Gold very life like, but it wouldn’t be half as impressive if not for the coloring styles of Bellaire. The use of light and over exposure on the Gold really makes it look like it is boiling hot, and in a liquid, molten state. Amazing work from a great team.

Well that was one of the best issues I’ve read in a while. It had everything: plot twists, tension, the villain thinking they’re justified in their pursuits, and fighting. Batgirl can frequently be totally awesome, and we got some really great work from the creative team this month.

There are several reasons why I can’t wait to get my hands on the next issue of Batgirl, and you only need to read Batgirl #46 to find out why!