Knox was a reporter, and an original character, in the Tim Burton film. He teamed-up with Vicki Vale to uncover Batman’s secret identity. Despite surviving the movie, he never appeared in any sequels. Even Burton’s follow-up Batman Returns failed to mention Knox. Actor Robert Wuhl played the character. 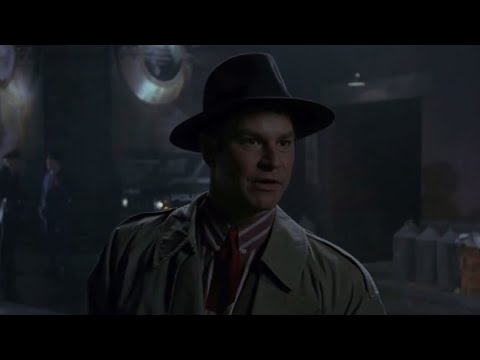 Allegedly, fans spotted Wuhl on the set of the CW crossover event. Reportedly, he is in a quick scene where he is “reading a newspaper, and he looks up into the sky”.

The Return of Alexander Knox?

Despite Wuhl being on-set, it doesn’t necessarily confirm that Alexander Knox is back. Some fans point to the recent Michael Keaton-inspired newspaper headline for proof of Knox’s return. However, it should be noted that the newspaper is not the same one that Knox worked at in Batman. In the movie, he worked at the Gotham Globe. The Easter egg newspaper is the Gotham City Gazette. Though, it is possible for Knox to have switched jobs in the past 30 years since the events of Batman.

In related Crisis-news, former-Robin Burt Ward was also on-set. He was seen walking a dog on the streets. Presumably, Robin is now retired and living a quiet life.

However, even the set photos have some comic book Easter eggs for the fans. Most can instantly spot Ward’s sweater colors: red, green, yellow, and black. The colors are an obvious callback to Ward’s Robin costume.

Even more intriguing, Ward is walking a German shepherd dog. The dog bares a more-than-passing resemblance to Ace the Bat-Hound. Heck, throw on a black cowl and a Bat-insignia collar to complete the comic book look. Hopefully, this is indeed Ace. If so, this would be his first live-action appearance. Outside of the comic books, Ace was only featured in cartoons, like Krypto the Superdog and in Batman Beyond.

Crisis on Infinite Earths begins on December 8 at 8 p.m. ET/PT on Supergirl.