To deal a blow to the Light, the Team and the Justice League hatch a plan. How far will they go, and is there any turning back?

Triptych: a picture (such as an altarpiece) or carving in three panels side by side (from Merriam-Webster.com).

Much like a triptych, this episode works on different levels.

“Triptych” seems to be painted with the same brush as previous episodes “Usual Suspects” and “Summit.” The only difference is that those two stories featured toward the ends of seasons one and two respectively. The reveal of “Triptych” was such a payoff.

Perplex Lies and Presidios With Capes 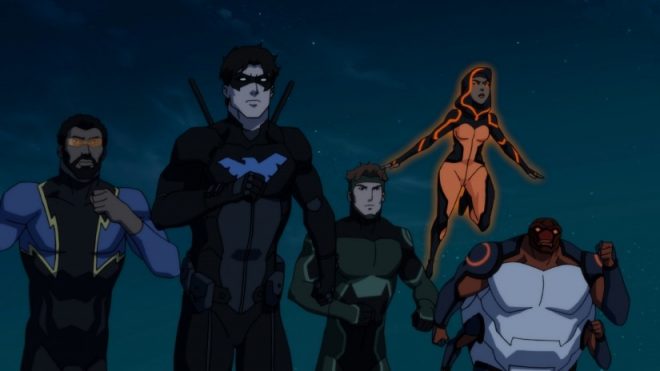 Apologies for trying to incorporate a reference to Sex, Lies, and Videotape, but I feel that it’s appropriate. Deception has been an outlying theme in every season of Young Justice, and I think it’s awesome!  I don’t know for certain, but I have a feeling that there will be consequences leading up to the mid-season finale.

“Triptych” ebbs and flows, hitting all the right notes. The action was spot on. I also liked that the Batman Family was in full effect. It reminded me of another season two episode titled “Alienated.” It was a treat to see the series expand the Dark Knight’s ranks, and it left me wanting the show-runners to explore these characters more.

This episode dug a proverbial hole for our favorite characters to pull themselves out of. It has set the stage quite well, and I am very anxious to see the ramifications of their actions. Another great episode, team!