Depending on whom you ask, it’s unfortunate that Zack Snyder is no longer affiliated with the DC movie universe. While it definitely had its problems, I didn’t dislike Man of Steel or Batman v Superman. I don’t necessarily believe that his cut of Justice League would have been better, but at least his vision would have been completed. Through no fault of Joss Whedon, adding a different filmmaker really screwed with the arcs and continuity of what Snyder had in mind.

In the meantime, their falling out at least has some benefits for fans. Snyder has basically gone rogue director and releases various photos to social media. Well, at least that’s what it seems. I’m certain he has permission from WB/DC, otherwise they would have done away with it by now. The idea of a rogue director is far more appealing than him playing nice with them at this moment.

The latest Snyder post to Vero is a BvS: Ultimate Edition poster that was only available to attendees of SDCC in 2016. It features the Trinity standing together heroically. Much of the marketing surrounding BvS featured Batfleck and Supes facing off in the foreground of what appears to be shrapnel and debris from such an epic battle. The background of debris remains, indicating its ties to those series of photos, but clearly has a different tone. 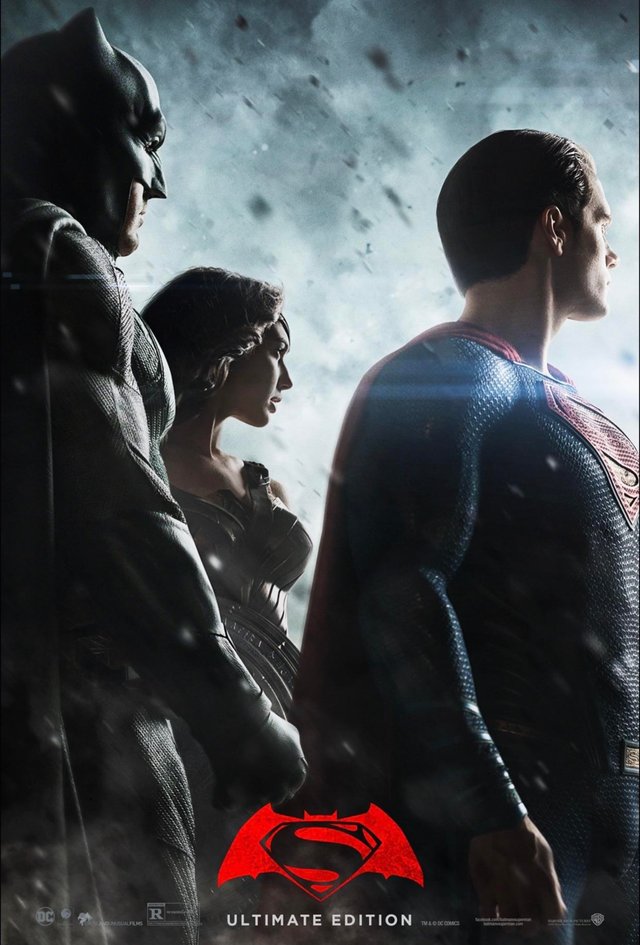 What a beautiful image. I believe that WB/DC made a mistake by not releasing this photo to the public. BvS was marred with bad reviews, several of which focused on its extremely dark and gritty tone, but this poster would have helped fight that. It’s the Trinity looking forward and there’s a light shining on Supes! Hope! It was sorely needed in that movie.

It seems considering the reception to Gal Gadot’s Wonder Woman, WB decided to shift gears and feature Diana more prominently. In the end, the blu-ray release of the BvS: UE featured a cover showing the Trinity standing side by side, front and center in a traditional shot. While this poster evokes a much more powerful image, the blu-ray cover featured Wonder Woman in front of the boys, seemingly leading the charge. In contrast, this poster puts her behind the boys in the background and in positioning.

Regardless, it’s a pretty powerful poster and it seems those select few who managed to nab it at SDCC should treasure it. With WB/DC distancing themselves away from Snyder and their initial plans for the DC movie universe, I highly doubt it would ever be officially released. Which I believe is the reason why Snyder decided to post it to Vero.

What do you think? Would you have preferred this image as the blu-ray cover?