‘Reign Of The Supermen’ Gets East And West Coast Release Dates 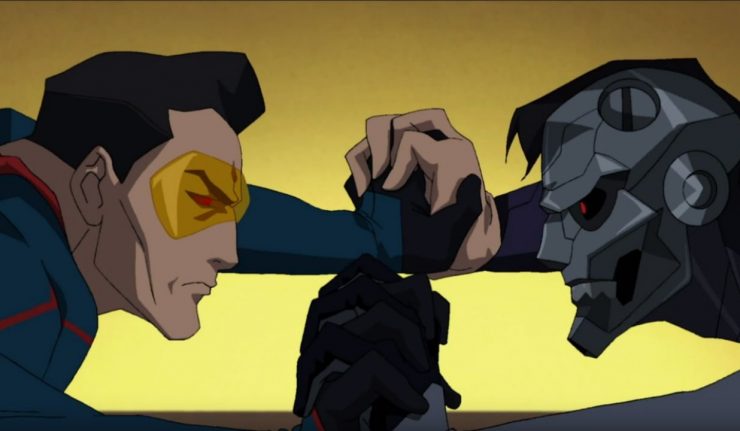 Reign of the Supermen will receive a limited special engagement in Los Angeles and New York.

Fans of this year’s The Death of Superman should prepare for a treat. Reign of the Supermen is scheduled to premiere on Digital HD on January 15, and DVD and Blu-ray on January 29. If you live in New York or Los Angeles, you can watch the feature on the big screen.

Warner Bros. Home Entertainment proudly presents the bi-coastal premieres of Reign of the Supermen, the next entry in the popular, ongoing series of DC Universe Movies, at The Paley Center for Media in Beverly Hills on January 10, 2019 and at the Directors Guild of America in New York on January 28, 2019. Filmmakers and members of the voice cast will attend the events for red carpet media interviews and a post-screening panel discussion.

Both screenings will begin at 7:00 pm. The Paley Center for Media in Los Angeles is located at 465 North Beverly Drive in Beverly Hills. The Director’s Guild of America is located at 110 West 57th Street in New York City.

A limited number of free tickets are available to the general public.

Fans wishing to receive free tickets to the Los Angeles event on Thursday, January 10 must RSVP via email to [email protected]

Fans wishing to receive free tickets to the New York event on Monday, January 28 must RSVP via email to [email protected]

The subject of all fan email entries should include which location (LA or NY) they wish to attend. The body of all fan RSVP emails need ONLY include the (1) name of the entrant, (2) number of tickets requested (limit four per entry), and (3) valid email address (again, within the body of the email text). Fans should keep their entry simple – here’s an example of exactly how the body of the RSVP email should appear:

Tickets to the event will be distributed on a “first come, first served” basis, and fans will be notified via email.

Reign of the Supermen finds Earth’s citizens – and the Man of Steel’s heroic contemporaries – dealing with a world without Superman. But the aftermath of Superman’s death, and the subsequent disappearance of his body, leads to a new mystery – is Superman still alive? The question is further complicated when four new super-powered individuals – Steel, Cyborg Superman, Superboy and the Eradicator – emerge to proclaim themselves as the ultimate hero. In the end, only one will be able to proclaim himself the world’s true Superman.

Reign of the Supermen is the second half of a two-part DC Universe Movies experience that began in August 2018 with The Death of Superman – the two films telling a more faithful animated version of “The Death of Superman,” DC’s landmark 1992-93 comic phenomenon. Superman Doomsday, the inaugural film in the DC Universe Movies series, told an abridged version of that comics story, but with a runtime of 75 minutes, the film was only able to focus on a core, singular storyline. The Death of Superman and Reign of the Supermen restore many of the moments and characters that fans hold dear to their hearts.

Are you excited to see the next installment of DC Universe Movies? Let us know in the comments below and on social media.