“Fall Of The Batmen” Part Two 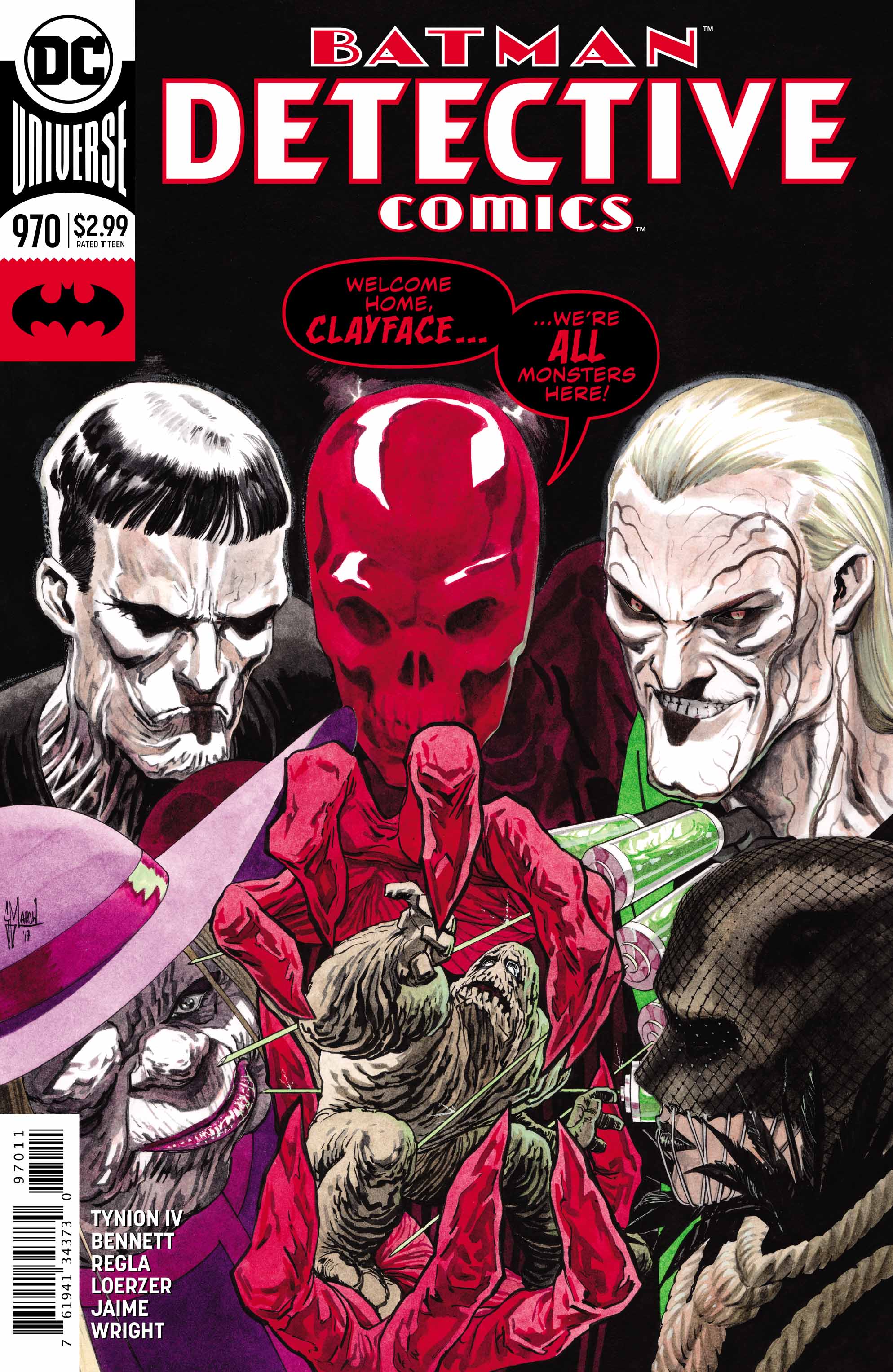 Batman’s Gotham Knights are under fire this issue, and not just from the Victim Syndicate. The second chapter of “Fall Of The Batmen” sees Gotham City’s Law Enforcers join the attack.

In Detective Comics #969, we saw Killer Moth begin to form his own team to combat Batman’s. Now, Commisioner Gordon’s own men and city officials, who previously didn’t oppose Batman when he acted alone, see the collection of Gotham Knights as vigilante-ism gone too far. When you throw the aforementioned Victim Syndicate into the mix, our heroes are seriously outnumbered.

Once again James Tynion has woven a thriller of a piece. Tension is high, and the team is still reeling from the return of Tim Drake. There are some terrific action scenes and some beautiful character interactions too. I am in awe at how Tynion can keep all these personalities in play. The pages with Tim’s nightmares, featuring his possible future self, then later his emotional confrontation with Spoiler are expertly written and beautifully drawn. Clayface’s ongoing arc is also brilliantly, and tragically, handled in this issue. I never thought that I could ever like or sympathise with Basil Karlo, but James Tynion’s handling of this villain turned hero is an inspiration. 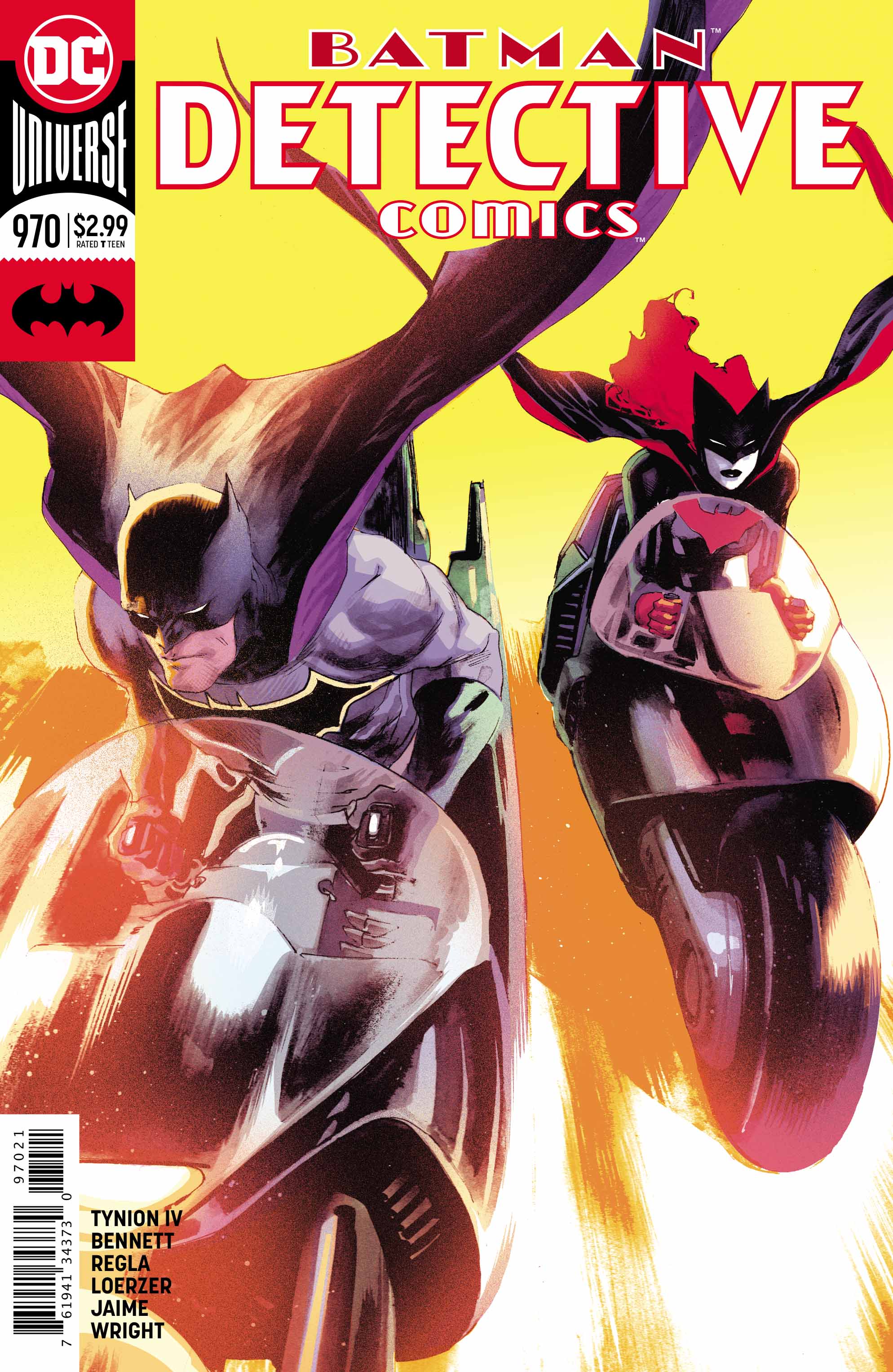 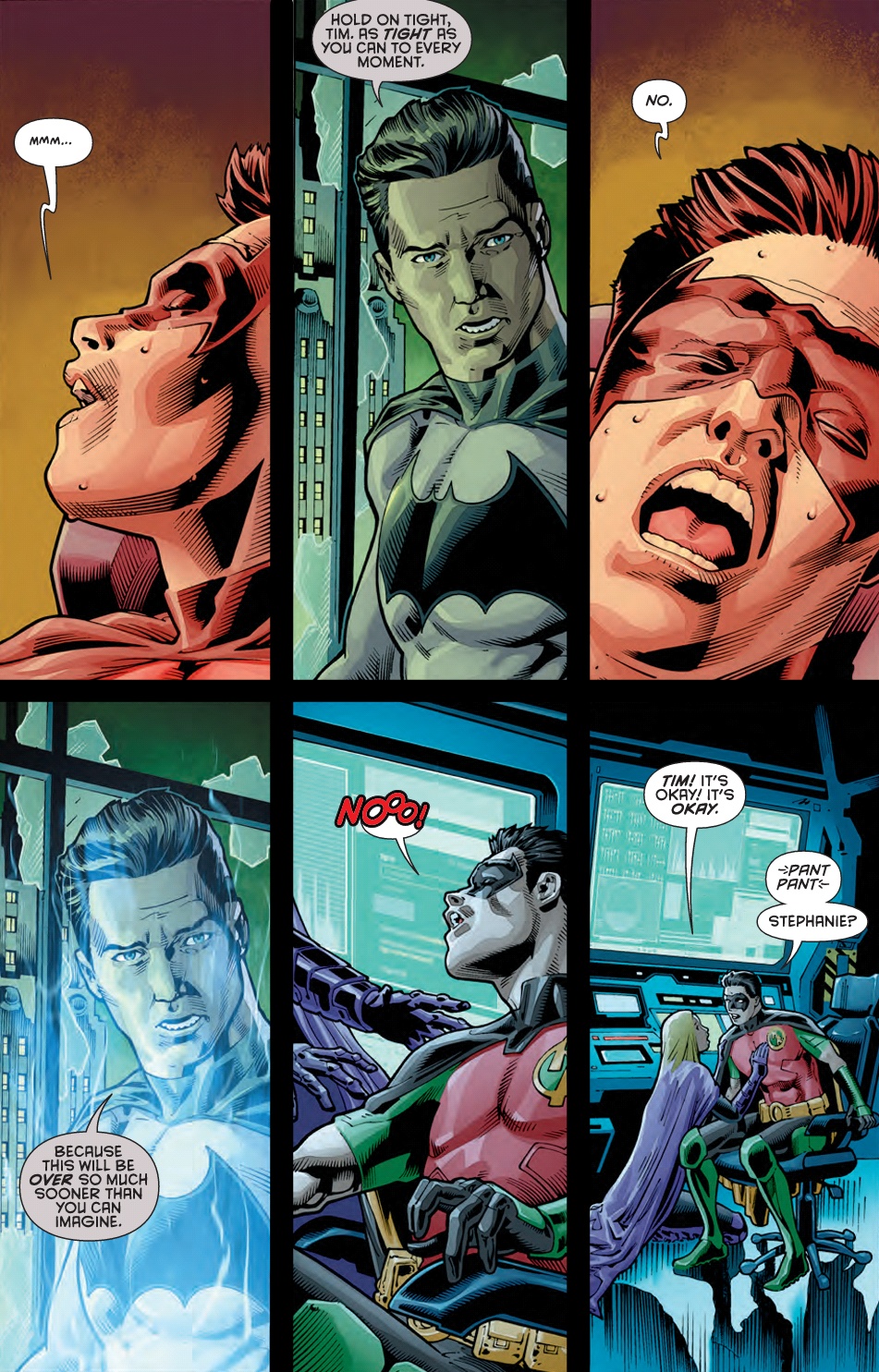 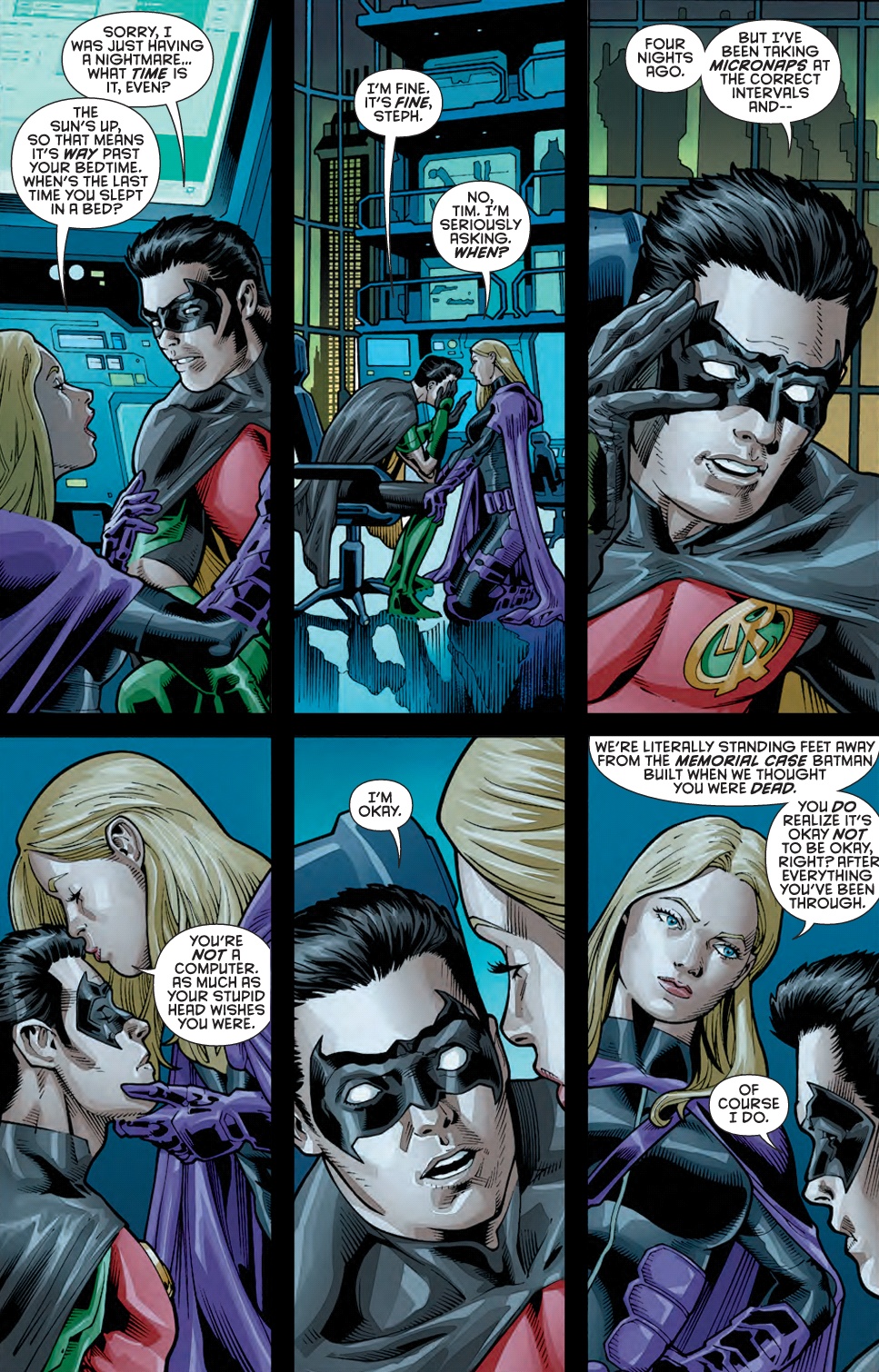 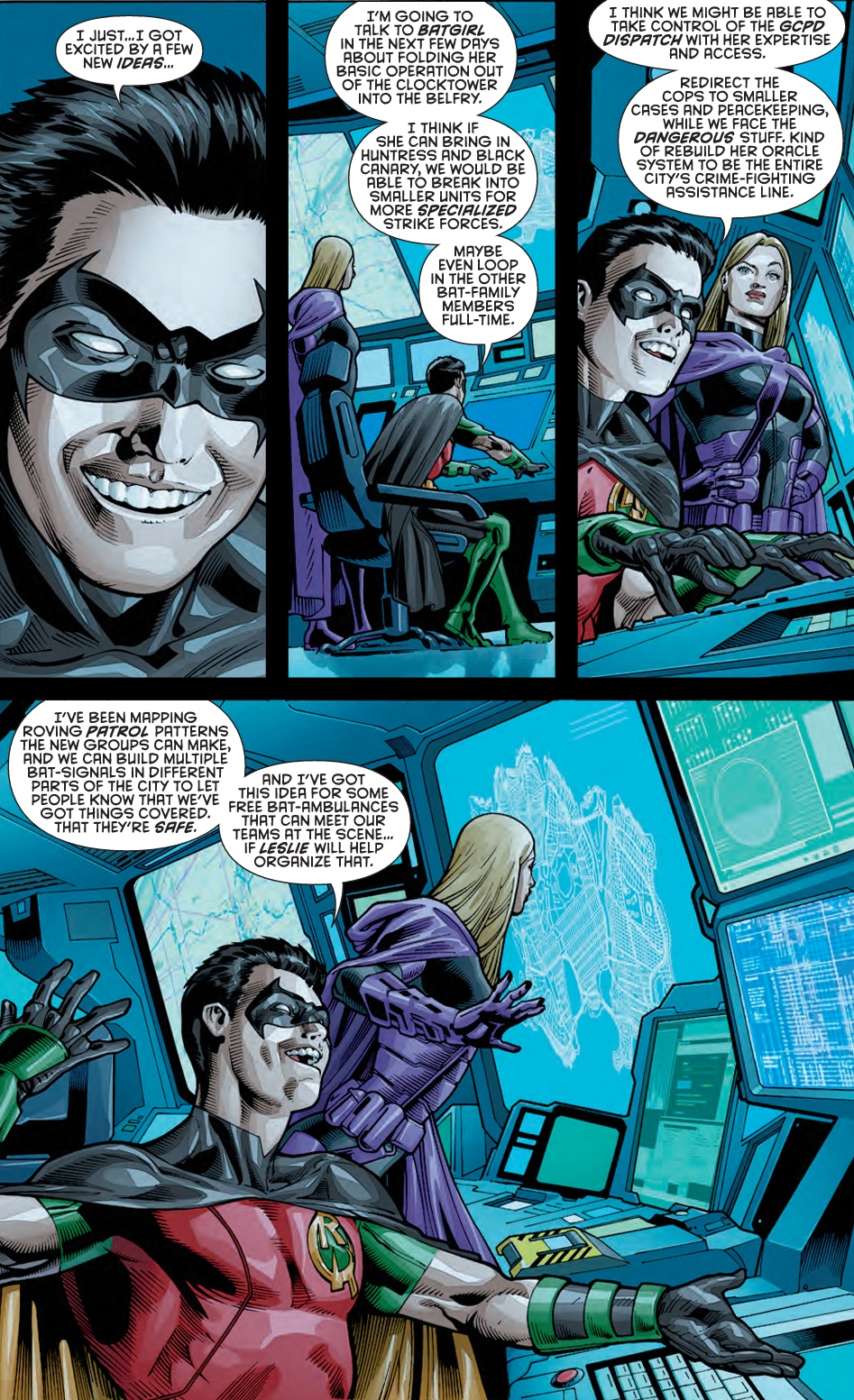 Fall Of The Batmen

Joe Bennett continues to shine with his pencils this issue. His style is unique, but he does a terrific job of keeping the characters looking similar to the way they always have. Detective Comics has consistently impressed me, in the way that the rotating art teams work so well with each other, and the quality of the title doesn’t (usually) waver.

Did you spot the evil brackets?

This issue has three different inkers and, while I don’t know who inked what, I can really see the difference. Some pages have solid inks, whereas there are others that look more scratchy/sketchy. While both art styles are valid, when it’s over the work of one penciller telling one story, the effect is quite jarring. One of the inkers has a vastly opposing style to the other two, and personally, I cared for one of them far more than the other. The art was by no means bad this issue, but it wasn’t on the level that I’ve come to expect, and frequently rave over, with Detective Comics. 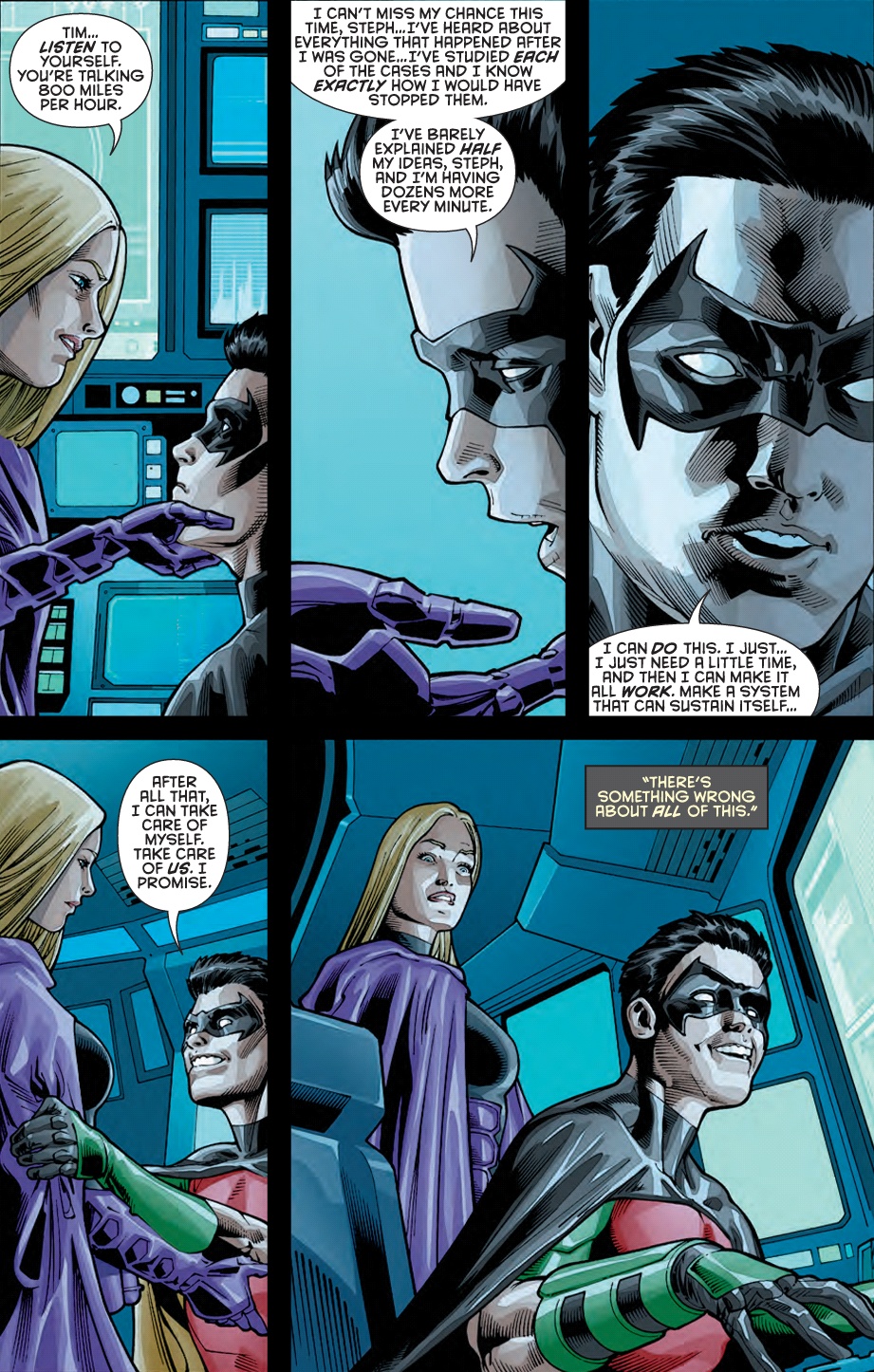 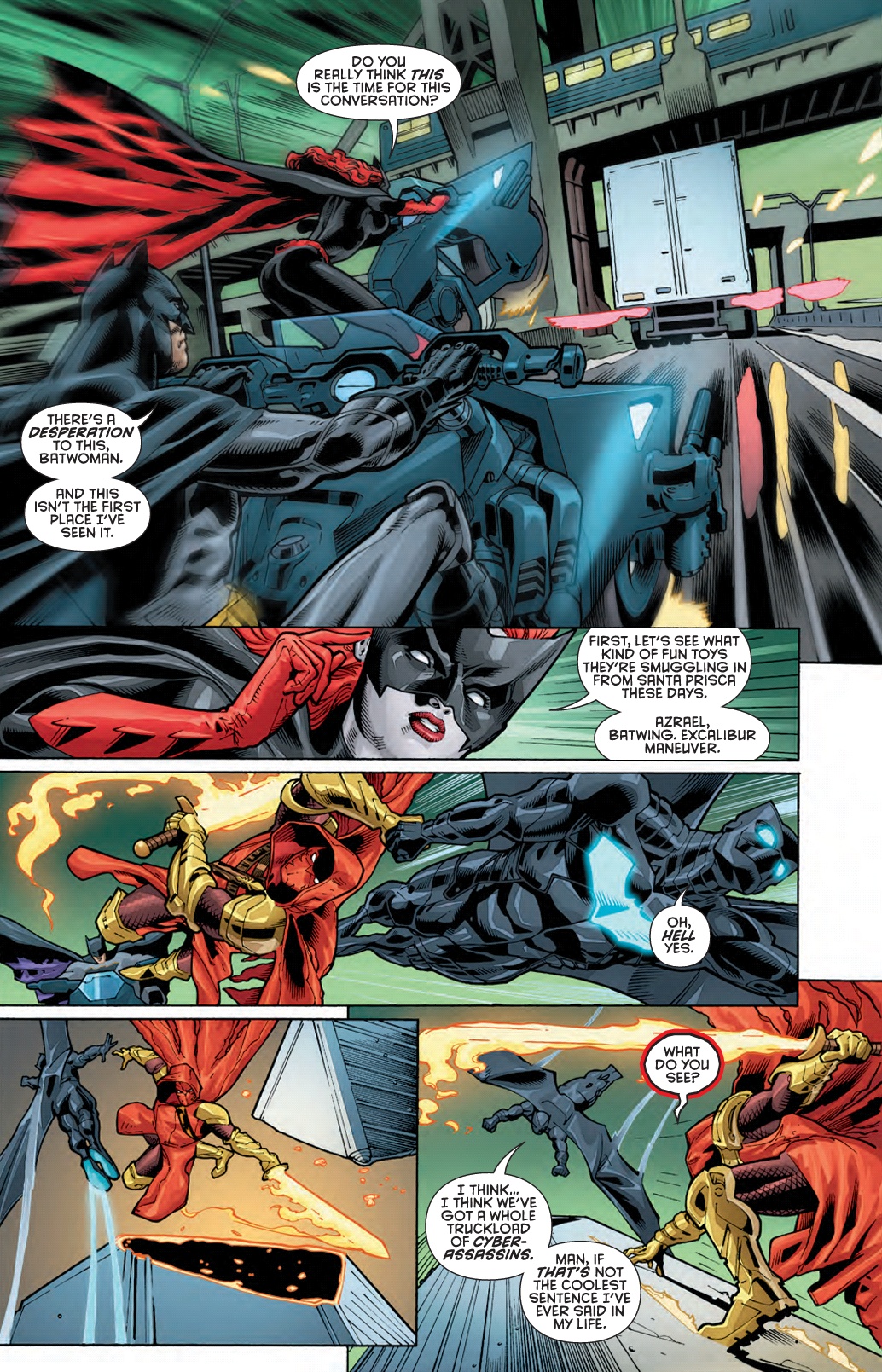 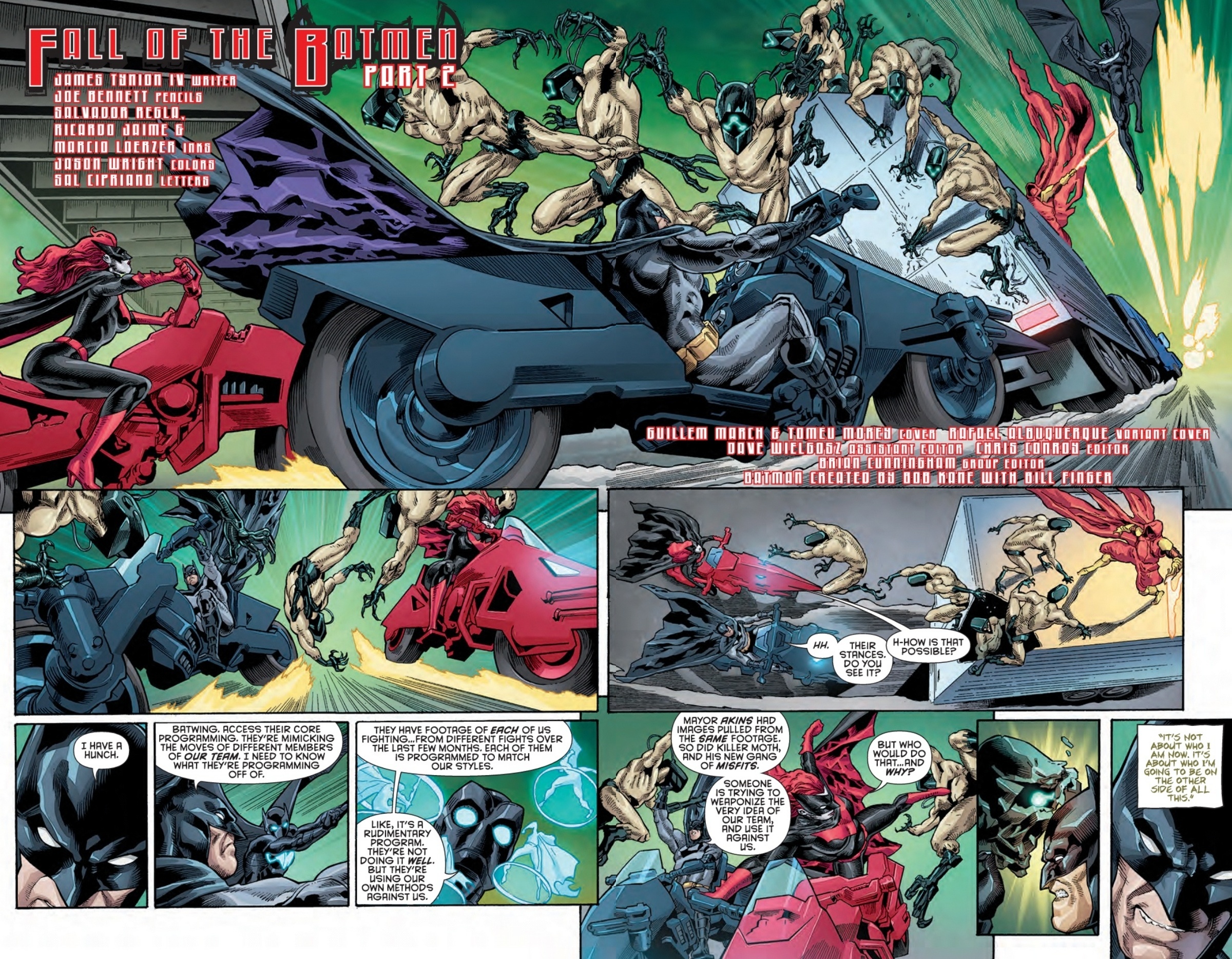 Pictures And A Thousand Words

Colorist Jason Wright really has done some terrific work. His dimly lit, blue hues in the Batcave are a sharp contrast to the vivid action colors used in the epic Batcycle chase. Mister Wright’s use of light and motion really enhance the finished art. As always Sal Cipriano’s lettering shows why having a professional letterer is key. While apart from a “Knock, Knock” there are no sound effects in this issue, Sal’s subtle lettering effects indicating fear and terror during Red Robin’s nightmare, and his anger after his fight with Spoiler are beautifully handled.

In terms of story this title always, ALWAYS delivers. This issue, the art let the book down, but only a little. The great pages still outnumbered the good ones. I guess that I’m just an old fuss-pot, but for the last couple of years, Detective Comics has been spoiling all of us, and this instalment hasn’t quite. At the end of the day “Fall Of The Batmen” Part Two still gets a very respectable:

‘Batman: Gotham By Gaslight’ World Premiere Will Kick Off DC In D.C.