“Better Together, Part 4: Nothing Is Real” 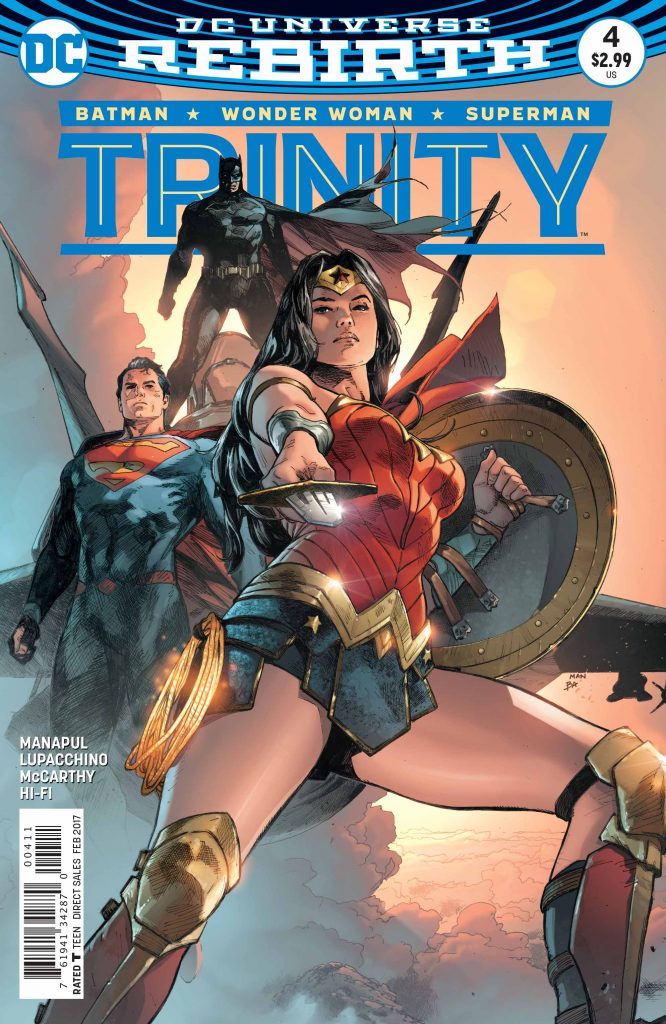 Clark and Bruce have experienced their own encounters in previous issues. Finally, it’s Diana’s turn to take center stage in Francis Manapul’s Trinity #4.

Diana’s dreamy desires take her home to Themyscira, the island paradise from which she was sent as emissary to the outside world. Immediately, she encounters her Amazonian kin. Especially relevant, Diana interacts with a younger version of herself—a wide-eyed, courageous, and curious young princess.

Denying an invitation to stay on the island, Diana instead joins her companions in exile to the “Dark Quarters.” Not surprisingly, the young Diana joins them, leaping onto their raft as they drift away. However, this reunion is short-lived. The issue ends with the reveal of another major villain – one presumed to be the powerful being holding sway over Poison Ivy. This reveal sets up the upcoming Trinity story well and piques interest in what comes next. 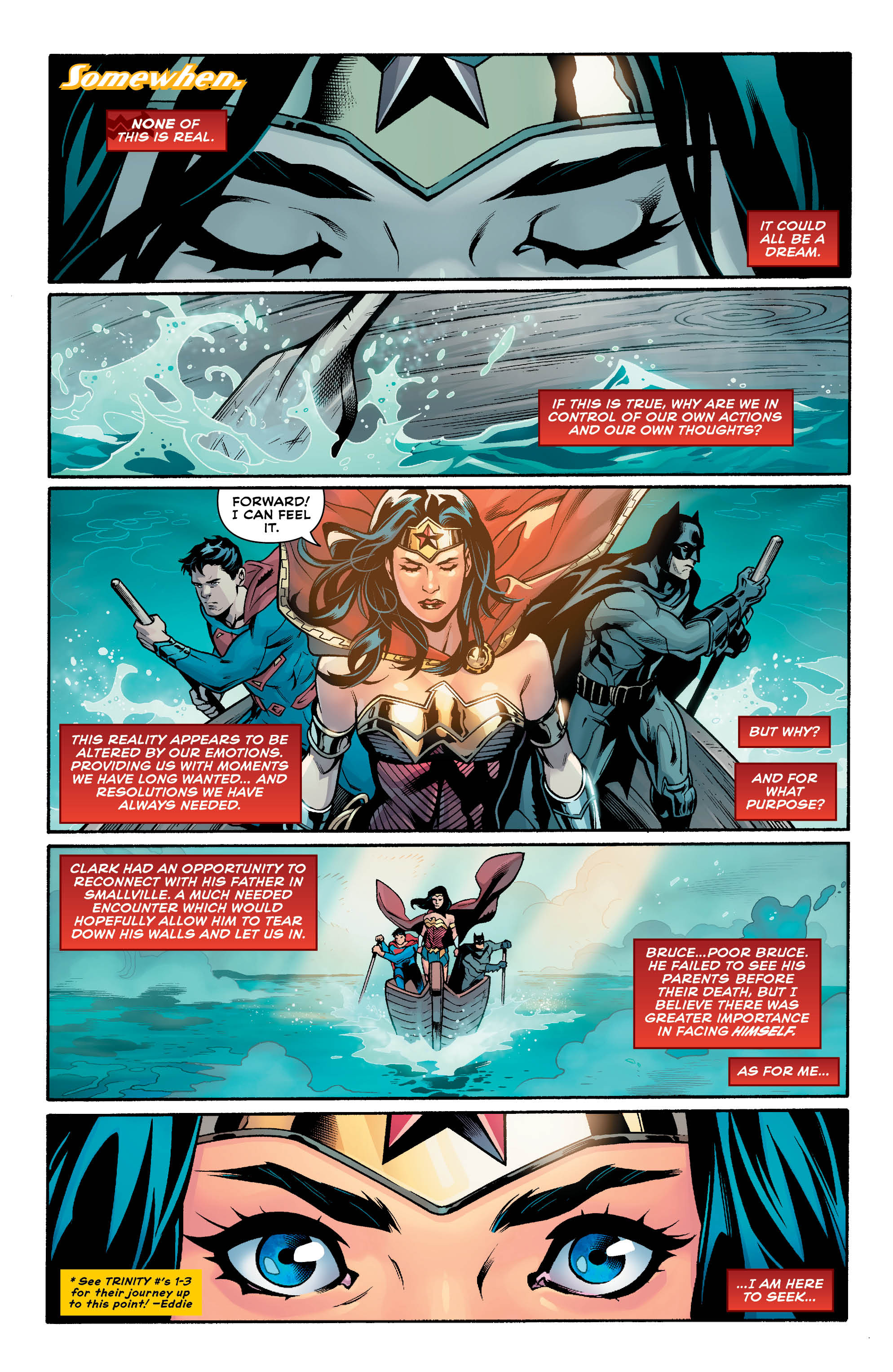 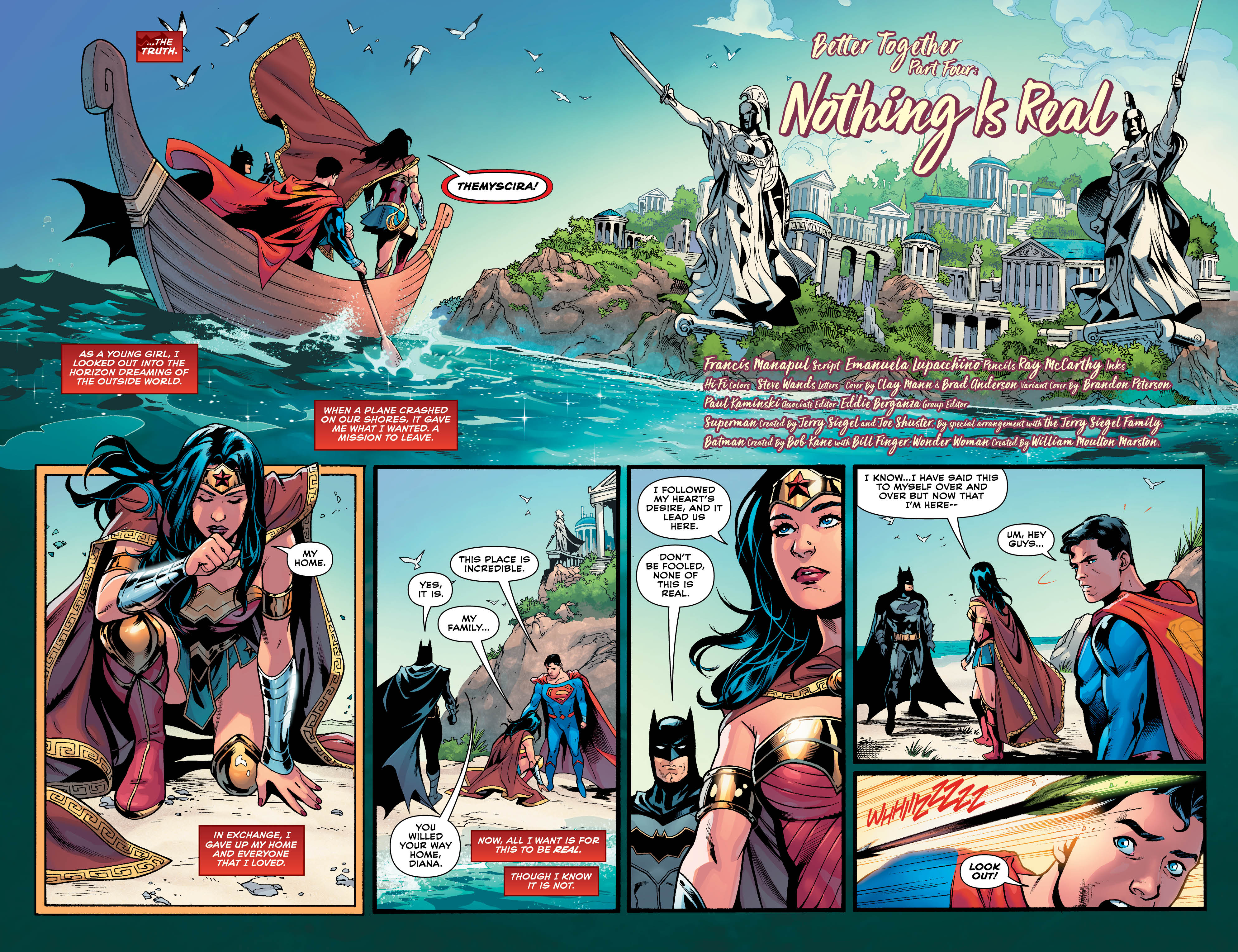 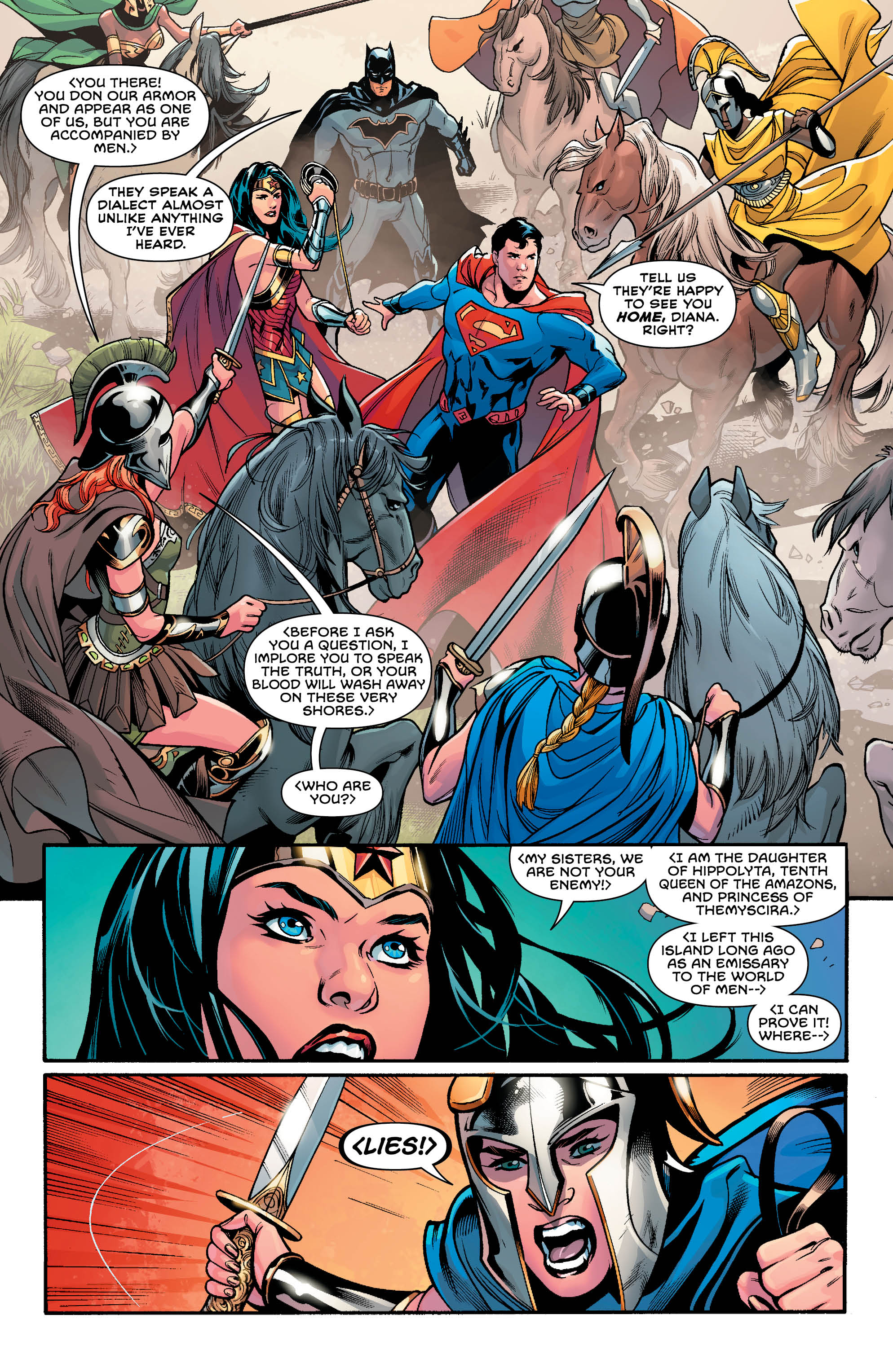 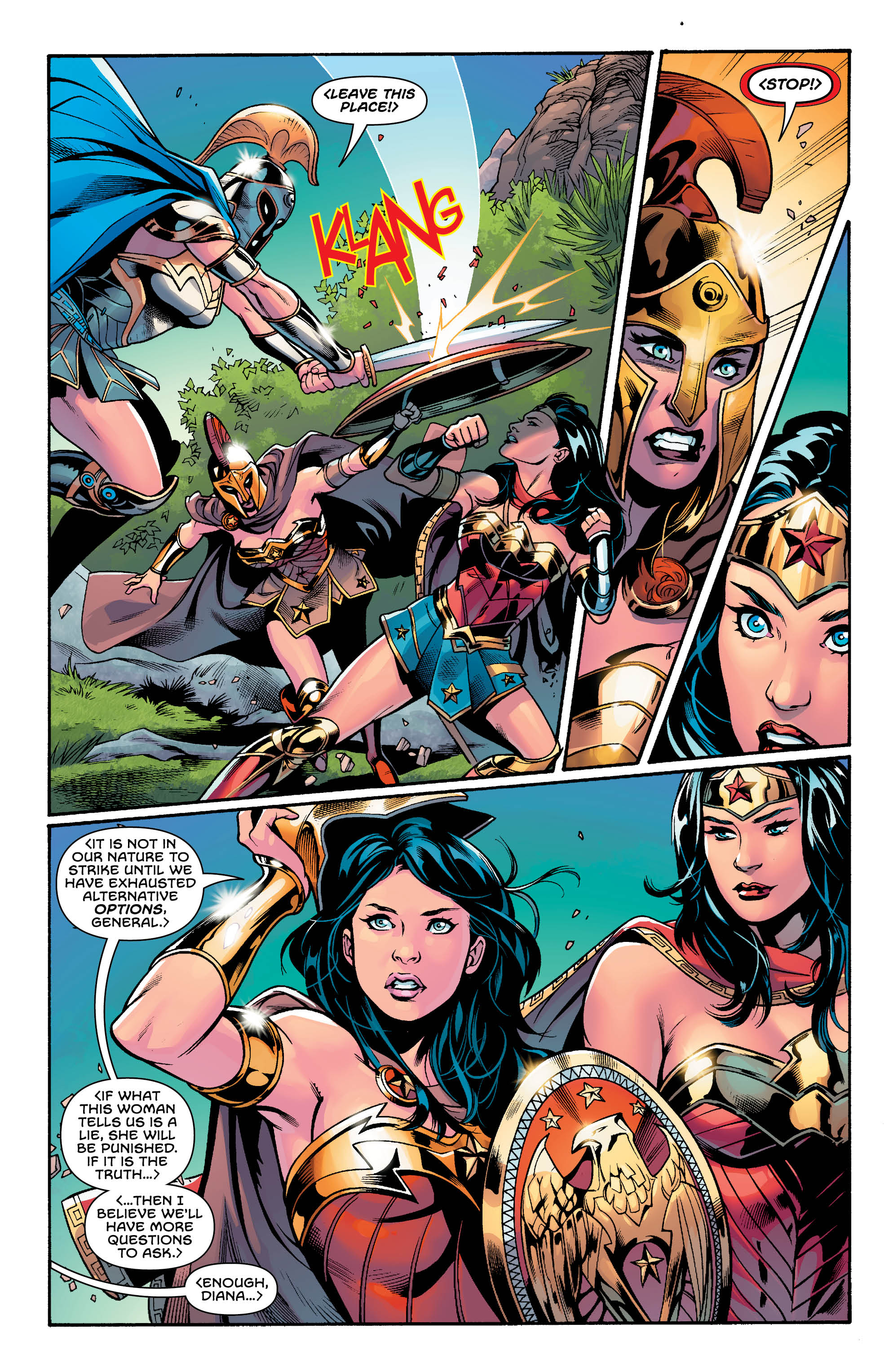 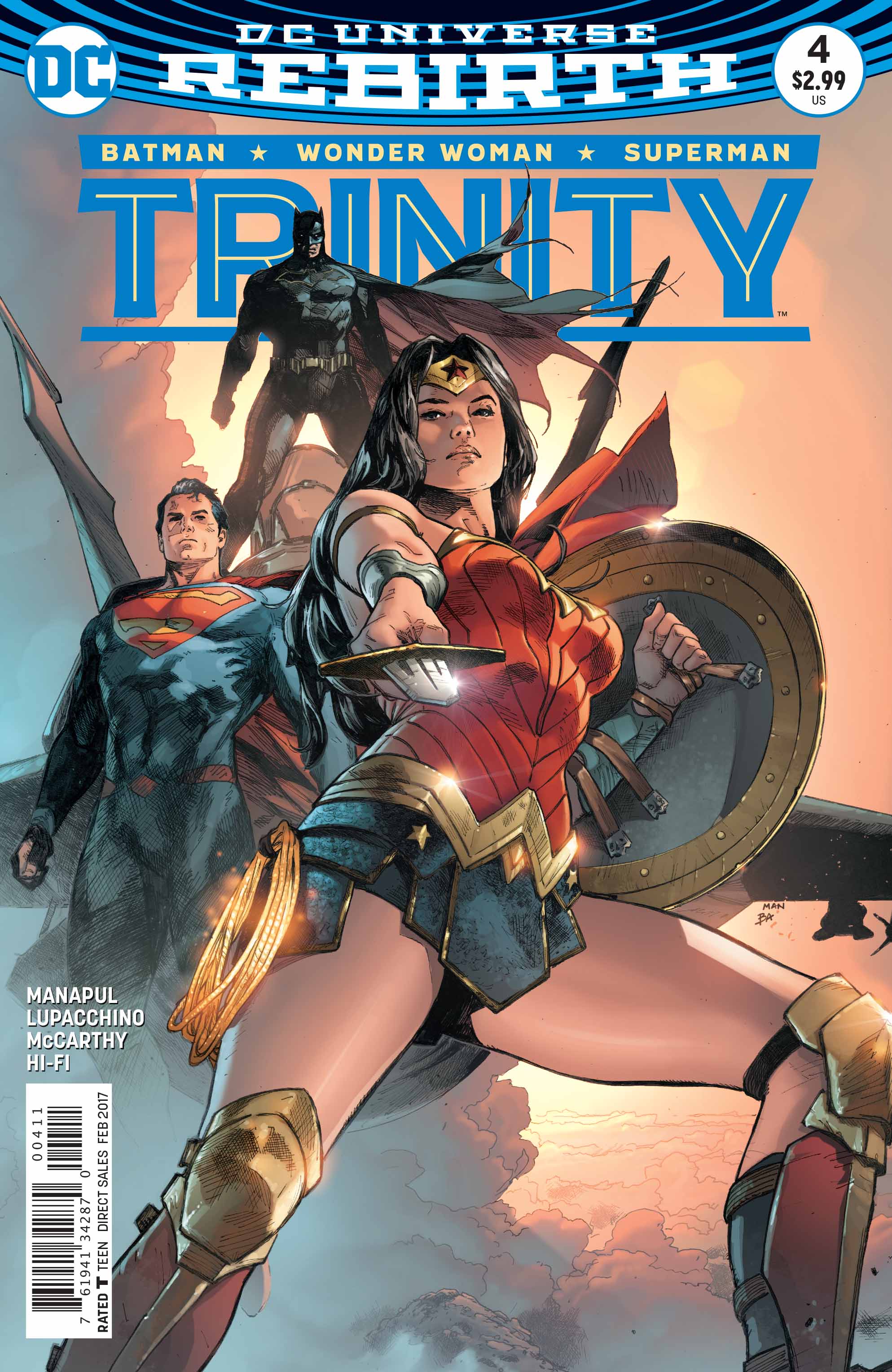 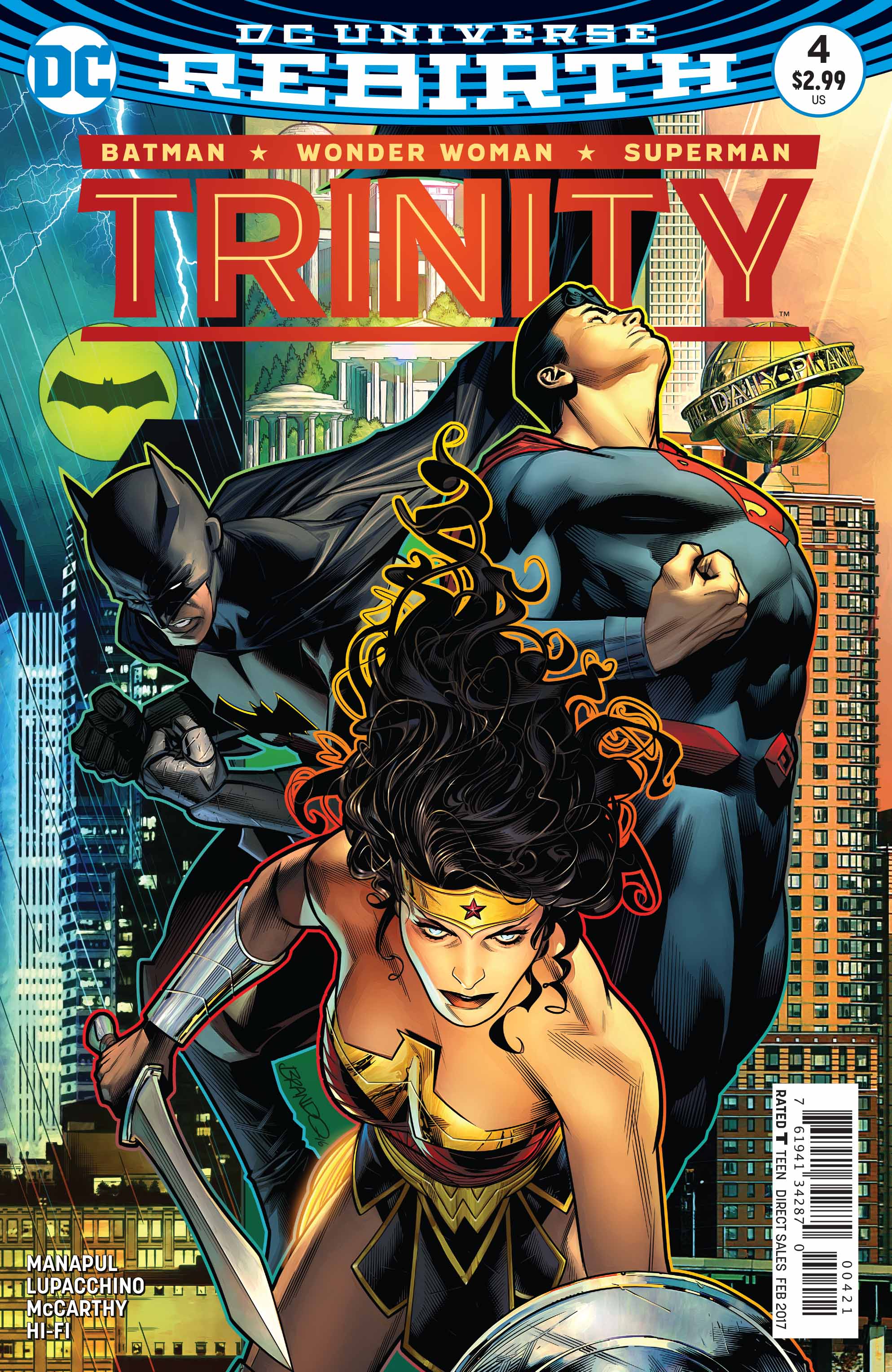 The art in the issue is good. Clean lines, colors, and shadow work together to move the story swiftly through the panels and frame facial expressions well. The heroes’ forms are well drawn as well, depicting their elegance yet powerful presence. Themyscira is beautiful, just as the island ought to be. As a result, blue and green tones depict a peaceful paradise where the Amazonian way of life thrives. The multi-page spread feels appropriate for the story, setting the scene and displaying the grandeur of Diana’s island home. Another example is the absolutely beautiful cover to Trinity #4.

For me, Trinity #4 failed to carry the poignancy of its previous issues. While it was pleasant to see Diana’s return and encounter with her mother, their interactions are far too brief for readers to connect with any depth. Furthermore, the whole issue felt too brief. Paired with a brisk pacing, Trinity #4 did not feel as weighty as its predecessors. Unlike Diana, the other heroes experienced loss through death, not choice. Perhaps this is the dissonance in Trinity #4 – a lesser connection with lead character’s longing in the story?

In addition, there are also unfortunate continuity issues in Trinity #4. The truck Lois drives jumps a few generations in design between issues. Perhaps this is a small, picky thing. But, it’s noticeable. In a story involving interwoven times and spaces, details matter. They provide anchor points, signal shifts, and transport the reader between these two ephemeral spaces. As a result, this oversight will be noticeable to readers in the collected volume.

In conclusion, Trinity #4 is a solid issue. It moves the story forward, reveals the primary villain, and creates intrigue for subsequent issues. The art is pleasing to the eye and the narrative is fair. Trinity has been an incredibly stunning title thus far. As a result, Trinity #4 was likely held to an unfairly high standard. In comparison, for this reader, it was a step down from the previous issues.