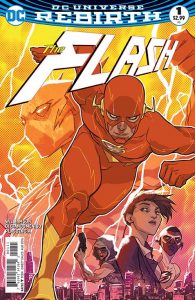 It’s a great time to be a fan of The Flash. Not only does he appear each week in an amazing prime time show on The CW, but now he also has a relaunched comic book series that may prove to be just as spectacular. Thanks to writer Joshua Williamson, it doesn’t matter if you’re a longtime fan, you’re familiar with only the TV show, or you’ve never experienced a story featuring the Scarlet Speedster in your life. Williamson recaps Barry Allen’s secret origin in the opening pages and crafts a tale anyone can dive into. It’s quintessential Flash and it’s highly accessible.

On that note, the narration starts out like that of the TV show and it’s hard to not hear Grant Gustin’s voice. With this being the first actual issue of the new run, it doesn’t forget about how The Flash: Rebirth one-shot tied into the DC Universe as a whole; it’s just that the focus has now been placed squarely on Barry Allen and his supporting characters as the series moves forward.

As I said, there’s a lot to love here. Not only will you see Barry’s super-speed on full display, his great aptitude as a forensic scientist is not forgotten. The story also slows down for a bit, taking time for us to get to know this universe’s version of Wally West and his aunt, Iris. All of the action and emotion are capably realized by artist Carmine Di Giandomenico, who once again proves he’s the right man for the job.

Someone to keep an eye on is Barry’s cop buddy, August, who, for now, seems like a pretty decent guy. He ends up getting himself into a bit of a shocking situation and I wonder if it is he who will go on to become the villainous Godspeed. If so, what will cause a good man to fall? We really can’t complain as it adds another layer to the book.

I can’t imagine any DC fan not loving this. The Flash is proving to be one of Rebirth’s best titles and is not to be missed.