An Impressive piece with changeable arms and great detail.

2014 is here and for fans who are building their assortment of DC Collectables action figures there is one impressive addition coming. One of the Dark Knight’s more tricker foes in Clayface! The shape shifting super villain has been a handful for Batman and now he becomes part of an array of collector’s items for any DC fan. The creation and design of this piece draws inspiration from the Clayface in the hit video game Batman: Arkham City.

This is the largest collectable item thats been released in the DC Collectables range standing in at 13 inches. The build quality is brilliant, and both the texture and sculpture bring the character out of a comic book and produce an award winning presence. The figure has eleven definitive points including a removable head piece and arms that can be changed. 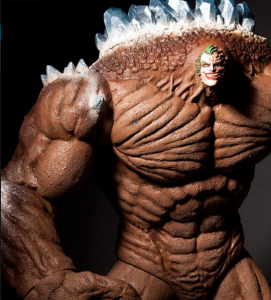 Also swap out the head!

Place this piece with the rest of the collection you have and it will stand its own ground, just like the character we have come to know.

History has been transformed in ‘Detective Comics’ #27