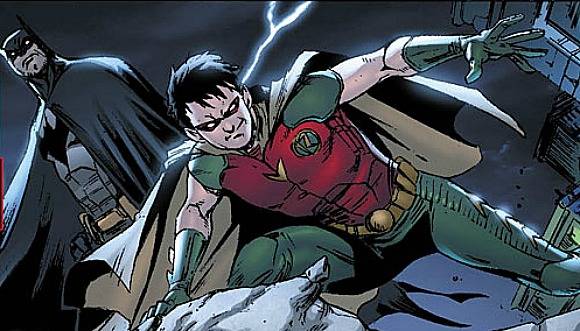 The Zero Year event that’s currently in the Batman title will be getting more tie-ins to show the lives of other members of the Bat-Family before they met the Caped Crusader. The entire Zero Year event takes place six years before the current DC Universe, so we’ll be able to see some Gothamite characters at an earlier point in their lives before they met Bruce Wayne and joined his mission to wipe out crime from the streets of Gotham. For example, we will see Dick Grayson in Nightwing approximately one year before he lost his parents and became Robin the Boy Wonder. But what about the ‘Black Sheep’ of the family, Jason Todd? Jason is still a few years away from taking up the mantle of Robin and meeting his end at the hands of the Joker. James Tynion IV sat down with comicvine to talk about the Zero Year tie in for Red Hood and The Outlaws

Since this is taking place a whole six years prior to the formation of the Outlaws group, the Tynion confirms that this will be Jason’s story, front cover to back. It’ll dive into his origins and what shaped him into the he would become, not only as Robin, but as the Red Hood.

With the Gotham focus, this really seemed like the perfect place to delve into the history of Jason Todd on his own. This issue takes place roughly six years before the start of the New 52, a little over a year before Batman would encounter the Justice League. At this point even Dick Grayson hasn’t met Bruce for the first time. I think Roy Harper is probably out there getting into the kind of repeated trouble that’ll ultimately get him locked up, where he catches the attention of Oliver Queen, and Kori is likely still off-planet. So this issue is going to be 100% Jason, cover to cover.

This isn’t the first time we’ve seen Jason as a younger kid in Gotham though, Tynion had written the back up of Batman #0 which showcased Dick, Jason, and Tim five years before the main line of comics. Tynion clarifies when this story takes place compared to the time Jason would be in that story.

This would be roughly a year before that BATMAN #0 backup feature, and we’re actually going to see the friendship between Jason and Chris (the kid who shot the woman Jason was comforting in that backup), as it’s developing. As we saw in #0, Chris represents what Gotham is calling Jason to do… He represents the darker path that Jason is doing his best to avoid walking down… And in our Zero Year issue, we’re going to see that dichotomy explored. Jason isn’t sure whether or not he’s doomed to become what his father and this city expects from him. He’s frightened of the deep rage he feels in his heart that sometimes he can’t control. He worries that at his core, he’s a bad person. This issue will give him a chance to show his true mettle, and make some of the first decisions that will ultimately lead to him becoming Robin.

Jason’s life before meeting Batman is pretty rough. He has a bad home life, and later would end up roaming the streets, homeless. Jason in this story will be at the cusp of leaving his home life for the streets and how it shaped him into the adult he grew up into.

This will take place right on the border of those two moments in his life. He’s still at home, with his mother, but she’s not doing particularly well. His father is absent, making another one of many stops at Blackgate Penitentiary He’s doing his best to cope with all the horrible things life has thrown at him, which have all been thrown into the spotlight during the repercussions of the Zero Year storyline. Jason grew up in Crime Alley. That’s never been a particularly nice place to live. Everything has been made much worse after the end of BATMAN #24, and a storm is coming to Gotham that could destroy everything… On top of that, a mysterious figure is going to enter his life in our issue, and she’s going to mix him up into some fairly major trouble. Jason’s young life was not a happy life, and this issue will dig into the heart of that, and help show us why he is the man he is today.

Since this story takes place six years prior to the main storyline of Red Hood, it is considered a standalone story that doesn’t really require the reader to have read the main book proper if they were interested in just this issue for it’s Zero Year Tie-In. However it it does offer something crucial that only the readers of the main book will learn as it ties into the current arc that deals with Jason Todd’s memories.

It’s very much a standalone story. If you haven’t been following RED HOOD AND THE OUTLAWS, you’ll still get a full story that doesn’t require any context. However, if you have been following the story, Jason’s past – his memory – is the chessboard on which the antagonists of my story have been playing their game. Something that happens right here, in the midst of Zero Year, will ultimately be crucial to the big finale of the Jason Memory-Loss storyline.

…The Red Hood Gang is probably my favorite new addition to the Batman Mythos in Zero Year, and once we started talking about doing a tie-in issue, I knew that they would be key to figuring out this moment in Jason’s past. Their addition to continuity will give new weight to what it meant when Jason finally became the Red Hood after his death and resurrection. Their position in the city has definitely changed after the events of Batman #24, and this issue could be seen as an epilogue of sorts to that issue, at least as they’re concerned. There’s a reason the Red Hood Gang hasn’t been an ever-present entity in New 52 Continuity between Zero Year and Present Day. If you’re curious why, I would definitely pick up this issue.

Last but not least, there’s the ever present question that’s never too far from anyone’s mind when there will be a story set in the past that has to deal with Jason Todd. The man who killed him, The Joker. He is asked if he be making an appearance, especially now that we know that Joker is possibly responsible for shaping Jason’s entire life between this period and his untimely death as Robin.

Now, that’d be fun, wouldn’t it?…There are two very familiar, very major figures who will make an appearance apart from the ones discussed above, but they are at the heart of the mystery of the issue… So I guess you’ll just have to wait and find out in November. I am incredibly excited about this issue, it’s easily my favorite of my run so far. I can’t wait for folks to see what we have in store.

We’ll find out what helped shape Jason’s life in Red Hood and The Outlaws #25, on sale November 20th.